Inouye of Hawaii. Sponsored by United Seamen's Service, the silver statuette of Christopher Columbus was presented to the Senator by Samuel B. Nemirow, Assistant Secretary of Commerce for Maritime Affairs.

In his acceptance remarks Senator Inouye, who has represented the State of Hawaii in Congress for more than 20 years, urged the Federal Government to make certain that U.S.-flag vessels have that "extra edge" in competing for cargo in its own trades, and that the U.S. shipbuilding and ship repair industry has the extra edge to make it more attractive than its foreign competitors.

Senator Inouye said "what remains to be done if our merchant marine is to be strengthened is one thing—a change of attitude by our Government. By that I do not mean," the Senator said, "merely an increase in subsidies, although that may be necessary.

If that is all we do, however, doubling or even tripling subsidies would at best be short-term fixes, and we would merely be postponing the ultimate demise of the industry." The Senator from Hawaii is Chairman of the Senate Subcommittee on Merchant Marine and Tourism, and architect of the Ocean Shipping Act of 1980. Secretary of State Edmund S. Muskie was honorary chairman of this year's AOTOS Award; co-chairmen included J. Lane Kirkland, president of the AFL-CIO, and many other labor and industry leaders. 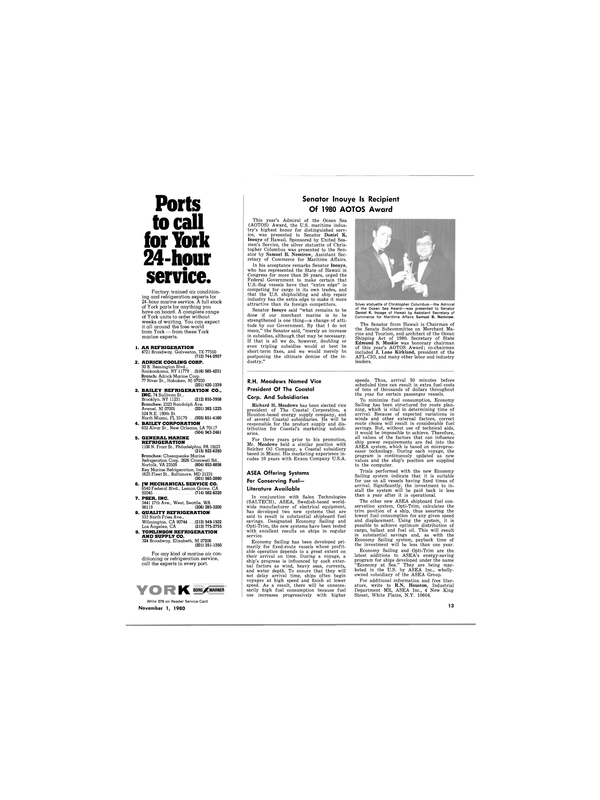