For the second time in only a f ew months, the authorities of the People's Republic of China have approved a license agreement between a Chinese diesel engine builder and B&W Diesel A / S of Copenhagen. The new agreement grants to China Corporation of Shipbuilding Industry the license to build the engines in B&W's latest two-stroke line.

CCSI is an i m p o r t / e x p o rt branch of the Sixth Ministry of Machine Building, which is responsible for China's largest shipyards and engine factories. Production is planned at several facilities, but in the initial phase will be concentrated at the Hu- Dong Shipyard in Shanghai. With some 9,000 employees, Hu Dong is a well-established shipyard already comprising a modern plant f o r the production of Chinesedesigned diesel engines.

Shanghai Shipyard belongs to the Ministry of Communications and has about 10,000 employees.

The actual production of the B&W engines will take place at Zhen Jiang Marine Diesel in the city of Zhen Jiang on the Yangtze River about 300 kilometers (186.4 miles) from Shanghai. The factory is still under construction and will comprise, when completed, a total workshop area of about 25,000 square meters (269,- 000 square feet) and will have some 700 employees.

The engines to be produced under this first license agreement will be used both f o r electric power generation in large vessels and as propulsion engines in small vessels.

Conclusion of these two license agreements is seen as a result of the intimate cooperation between the People's Republic of China and B&W Diesel A/S, and of B&W's long-standing business relations with China, which were intensified two years ago when the cooperation between Shanghai Shipyard and B&W was initiated. 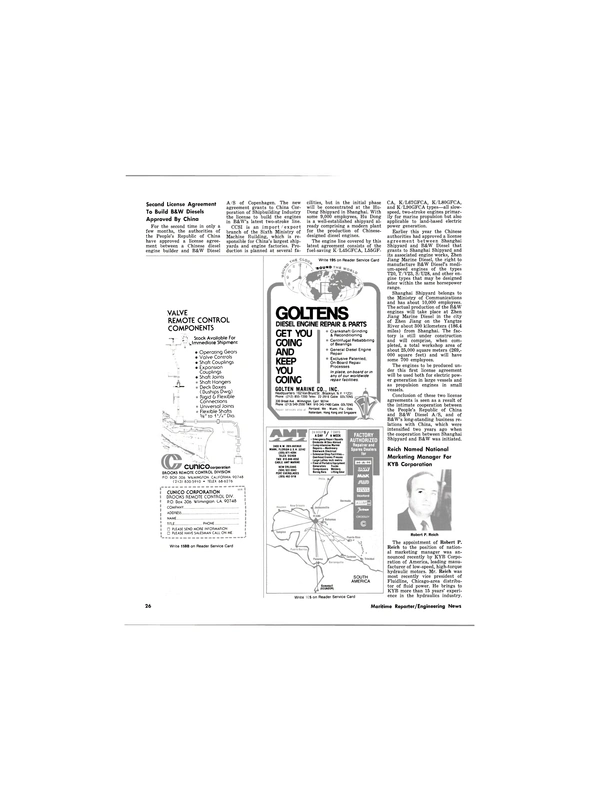