Fuel Conservation And Upgrading Of The Shipboard Boiler Plant

Most operators are not aware that just by operating their boilers within their design criteria, they can save 1.8 percent of their fuel costs. This fact was established by one owner over six years ago. Vessels operating under the U.S. flag today were, for the most part, designed and built in an era long before the present fuel crunch. They were, therefore, not designed with high fuel efficiency in mind. However, even on these vessels fuel rates can be improved and in some cases surpass their original designated rates.

To accomplish this, a thorough survey of the boiler is required, paying particular attention to refractory ; burner throats, angles and dimensions; water sides to insure that no deposits are present ; furnace-side-pressure parts are clean; external surface of steam air heaters for non-fouling; calibration and replacement of instrumentation; overhaul of s o o t - b l o w i n g equipment, and tightness check of all valves.

Combustion controls should be serviced and adjusted. This is an item that is frequently ignored and it should not be as excess air accounts for most of the heat loss up the stack.

Good instrumentation to monitor air and flue-gas pressure drops and stack temperature should be installed. Stack temperature is extremely important as it is an indication of your boiler efficiency. Most of the older vessels do not have flue-gas analyzing equipment. Therefore, an electronic flue-gas analyzer, preferably with chart recorders, should be installed. This expense is justified by savings experienced from better surveillance and control.

Most of the older plants were designed for 15 percent excess air operational. This can be improved at a relatively low cost. In some cases, it is possible to reduce it to 10 percent with a corresponding improvement in performance and maintenance. Fuel quality is most often blamed for boiler fouling problems. However, fuel quality is only one of the contributing factors. There are many documented cases where chronic boiler fouling problems have been eliminated by improving combustion, without any change in fuel quality.

Minimizing combustion air saves fuel, not only by increasing flame temperature, but also by minimizing boiler-tube fouling and refractory slagging. In addition, the decrease in dioxide content retards the corrosion rate of furnace-side metals. The evidence on boilers operating at 5 percent excess air as compared to 15 percent excess air is quite dramatic. Units on 5 percent have operated for periods of two years with no water washing of firesides as compared to a cleaning cycle of three to six months for units on 15 percent.

With fuel conservation and reduced fuel cost in mind, many owners have decided to run their vessels at reduced speed. The boiler designers should be consulted and their recommendations solicited prior to attempting this type of operation. Operation of the boilers at reduced loads can lead to accelerated deterioration and an increase in maintenance costs. If it is anticipated that reduced load operation is to be a long-term condition, it may be possible to modify the boilers and auxiliary equipment for optimum performance at that load. Should a reduction of 50 percent be in consideration, it is recommended that one boiler operation be utilized.

Modifications In upgrading a boiler plant, we must recognize that more emphasis is being put on the refineries to obtain higher quantities of distillates from a given barrel of crude, resulting in a degradation of the bunker fuels used by the majority of our merchant vessels.

It has long been recognized that sulfur, vanadium and sodium are the chief constituents of a fuel oil which contribute to operation difficulties. Special consideration must, therefore, be given to compensate for these degraded fuels. One area of major concern is the economizer.

High sulfur fuels tend to promote dewpoint corrosion and fouling in the economizer tube-bank area. This problem has been dealt with in the past and material design changes have been made to aid in combating the "cold-end corrosion." If the feedwater heating arrangement is such that the feed temperature is below 280 °F, provision should be made to raise it to this level to aid in avoiding dewpoint corrosion. In the economizer, the use of "Corten" or low-alloy steel fins and low-alloy tubes in place of carbon steel will give improved dewpoint corrosion resistance. By using cast-iron gill rings in the top 20 percent of the economizer, the problem of sulfuric acid attack may be minimized.

In this continuing battle of the fuel rate, we have recently examined the possibilities of upgrading an existing 24,000-shp tanker plant. This plant has the standard three feedwater heater economizer cycle operating at 850 psig, 930 F superheat. By adding equipment and incorporating features shown on the heat balance in Figure 1, it is estimated that a 4 percent savings in the fuel rate can be achieved.

These changes encompass the addition of a secondary economizer, one 1-p heater, one h-p heater, replacing steam air ejectors with vacuum pumps, modifying feed-pump turbines to operate on superheated steam, added extraction from h-p turbine, cascading drain system and increasing superheat temperature from 930 F to 950 F. If the vessel were on a long run, such as Persian Gulf to the U.S. or Europe, an attached generator could be included at minimal expense, resulting in an additional savings of 1 percent in the fuel rate.

Another method of plant upgrading presently under consideration is that of modifying an existing nonreheat to reheat. A complete change out of boilers does not appear to be economically feasible. However, adding a reheater section to the existing plant does.

One approach to this concept is to install the reheater in a refractory lined box that is separately fired by a combuster, as is done in separately fired heat recovery applications. This arrangement simplifies reheat control requirements and does not interfere with the normal operating functions of the main boilers.

It is estimated that this modification would result in a 4 percent fuel savings on a plant of approximately 30,000 shp.

Coal Firing In today's environment no upgrading evaluation would be complete unless consideration was given to coal firing. By the year 2000 it is projected that fuel-oil costs will be exorbitant. One owner's representative recently made the statement that the biggest problem facing U.S.-flag carriers is that of the costly conversion from steam turbine to dieselpowered ships. If the projections as indicated are correct, it would appear that he is heading in the wrong direction. The conversions he speaks of are reported to be in the area of 15 to 20 million dollars per ship. This is a sizable investment when you are looking for a quick payback on your outlay.

I believe the advantages of converting to coal, even when you consider that reboilering is required, far outweigh the diesel conversion approach.

On coal firing, history points out that this is not something which is new; we are simply improving on existing technology.

Major improvements have been made in the last 30 years in metallurgy, design and manufacturing techniques used in modern marine boilers, as well as the fuelburning fuel-handling systems employed.

The added cost for the coalfired plant with coal bunkers, fuel and ash handling equipment is estimated at $3,000,000 per ship above that of an oil-fired steamship. Obviously, any investment that can be written off in less than four years is well worth investigating.

The classification of coal under consideration for marine application today is stoker-grade bituminous, which is still available in numerous areas of the United States and the world for marine bunkers.

Coal pulverizers and the burner system are generally designed for a specific coal. This does not present a problem for land-based plants. Marine bunkering coals, however, will vary in specifications and may not be acceptable to a pulverizer system as originally designed.

We, therefore, feel that a stoker- fired boiler is the best presentday solution for coal firing aboard a vessel. The stoker will more readily accept changes in the fuel specification which are likely to occur in marine coal bunkers.

The main shipboard coal bunkers proposed are of the hopperbottom type. Transportation of the coal from the extraction point at the main bunker to the day bunker can employ one of two basic systems available. One system is mechanical and the second is a pneumatic transport system.

The mechanical coal feed system configuration can vary depending on the machinery space layout.

It is estimated that a reboilering conversion to coal-firing units would be in the five to seven million dollar range. This includes removal of existing boilers, installation of all new equipment, plus an insert into the hull structure for coal bunkers.

In conclusion, in a world which is subject to liquid fuel prices rising uncontrollably and with rapid degradation of liquid fuel, coal is a viable alternate for shipboard application.

For free copies of the full paper, Write 99 on Reader Service Card 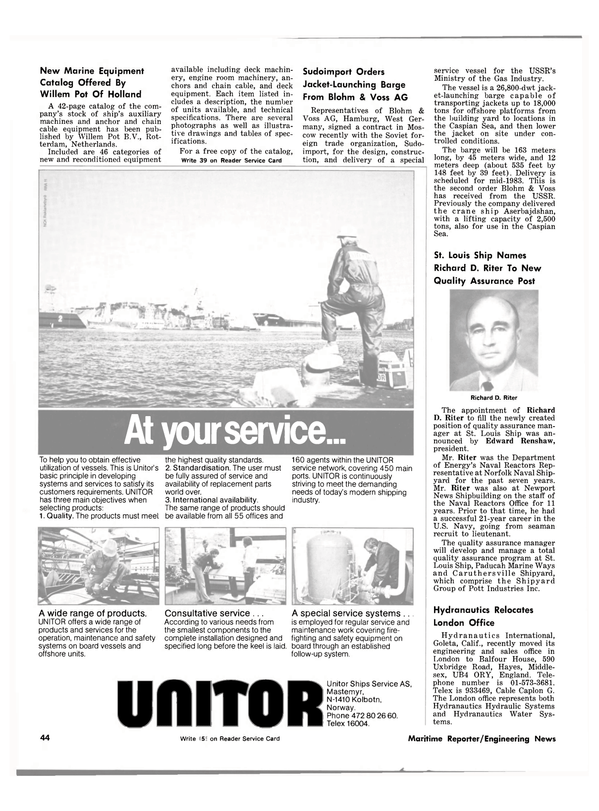 Read Fuel Conservation And Upgrading Of The Shipboard Boiler Plant in Pdf, Flash or Html5 edition of November 1981 Maritime Reporter