The 89th Annual Meeting of The Society of Naval Architects and Marine Engineers will convene at The New York Hilton Hotel, New York, N.Y. on November 19-21, 1981. "This is by far the Society's largest annual event," stated John J. Nachtsheim, president of the Society, "with more than 1,000 people from all segments of the maritime industry gathering to hear the technical presentations." At the simultaneous technical sessions on November 19 and 20, 14 papers will be presented with subjects of enough variety to interest all the attendees.

President Nachtsheini will give his annual address at the President's Luncheon in the Grand Ballroom on Thursday, November 19. Featured on the program will be the presentation of several important awards. Later that afternoon, at 4:00 pm, the annual Business Session will be held, where the members will act on proposed amendments to the Society's By-laws and other business that may come before the meeting.

On Friday evening, November 20, the Annual Banquet will take place in the Grand Ballroom with Mr. Nachtsheim presiding. This is the most traditional part of the Annual Meeting, where the Society's highest awards are presented.

The banquet speaker will be the Hon. John F. Lehman Jr., Secretary of the Navy.

The Vice Admiral "Jerry" Land Medal "for outstanding accomplishment in the marine field" will be given to Ellsworth Peterson, president, general manager and treasurer of Peterson Builders, Inc., Sturgeon Bay, Wis.

On Saturday night, the Grand Ballroom will be the setting for the annual Dinner Dance, a fitting conclusion to the Annual Meeting.

Tommasi in the 1970s. Results from comparative tests on the ship models are presented. The influence of the bow and stern on the ship performance is discussed ; the abnormal phenomena observed are analyzed, and theoretical inferences are made. Also treated is the first full-scale ship's trial trip.

SYNOPSIS — This paper gives the results of a study of inert gas take-off designs and ship tank gas exchange methodology.

Scale model tests of shipboard uptakes to assess the effect of take-off location and the ratio of inert gas to flue gas flowrate on inert gas quality are presented.

Paper No. 3. "Risk and Operability Analysis in the Marine Environment" by Bruce L. Hutchison.

SYNOPSIS—A method is presented for developing the probability distribution for failure and operability functions. The technique discussed can be applied to systems operating in spatially- and time-varying wave climatologies, and subject to the favorable influence of seamanship actions. The paper discusses motivation and applications, traces the development of concepts, outlines detailed procedures and concludes with actual examples.

Paper No. 4. "Revival of the Coastal Tanker: Development and Construction of a U.S.-Flag 2,500- dwt Product Carrier" by Joseph D. Mazzei and Rudolph G. Terry.

SYNOPSIS — The Northern Sun, a 2,500-dwt coastal tanker, was constructed in a conscious departure from tug and tankbarge operation. Operating experience with both small harbor tankers and tug/barge fleets, together with recognition of modern technology and reduced manning potential on ships, formed the basis for a decision to rethink ver^el acquisition for waterborne intercoastal petroleum products distribution.

Paper No. 5. "Major Factors in Frigate Design" by William H.

SYNOPSIS—This paper identifies the major factors in frigate design and offers several designs as examples of how these affect a ship's size, cost and performance.

Some of the major determinants of frigate size and cost discussed in this paper include: choice of propulsion plant; maximum sustained speed, cruising speed and endurance; type and number of helicopters carried, and choice of weapons system and their associated electronics.

Effects of these and other "major drivers" are illustrated by using variants of FFG 7.

Paper No. 6. "Dynamics and Hydrodynamics of Surface-Effect Ships" by Paul Kaplan, James Bentson and Sydney Davis.

SYNOPSIS — A description is given of the importance of dynamics problems and their influence on performance and design of surface-effect ships (SES).

Problems of scaling model motions, as well as relations between analysis and test data, are described for seakeeping, maneuverability and control requirements for this class of ship. Correlation between theory and experiment is provided as the basis of using computer simulation predictions for full-scale design of large SES craft.

SYNOPSIS—The authors present the capabilities of the SHIPOPT computer program for use in assessing overall structural adequacy and/or developing preliminary ship structural designs, which are optimal in terms of a user specified objective such as least initial cost. The general program philosophy is discussed and two design examples are given: a segregated ballast tanker, and a double-bottom bulk carrier.

SYNOPSIS — The monitored speed-power performance of two containerships are interpreted in terms of their roughness histories.

Hull surface damage penalties and texture parameters are discussed, a code of practice for hull surface measurements and presentation is offered. Propeller roughness measurements are provided with the calculation of drag increase effects. A techno-economic model of the containerships provides economic comparisons between various bottom maintenance schemes.

The MIDP utilizes a duct mounted forward of the propeller.

The MIDP hydrodynamic features and trial results of the 250,000-dwt tanker Esso Copenhagen with and without MIDP are described in this paper. Also included are voyage data analysis of other MIDP's.

SYNOPSIS—The authors deal with the problem of compatibility between hull deflections and distortion limits inposed by the operational requirements of the main propulsion machinery components.

They evaluate the relationship between manufacturer's requirements and the structural design of machinery foundations.

Presented are a set of recommendations capable of helping the designer meet the requirements of foundation stiffness. Also included are suggested methods and techniques of structural analysis and design to assist the designer.

Paper No. 12. "A Coal-Fired Fluidized-Bed Steam Generator for Marine Application" by J.T.

SYNOPSIS — The fluidized-bed combustion process is described and its application to steam generators is shown through the description of demonstration projjects.

A preliminary design for a marine coal-fired fluidized-bed steam generator and the associated system arrangement is shown and described. The system presented can provide for efficient coal-fired propulsion while meeting expected emissions control requirements.

Paper No. 13. "Hydrodynamic Added-Mass Matrix of Vibrating Ship Based on a Distribution of Hull Surface Sources" by William S. Vorus and Schelte Hylarides.

SYNOPSIS — This paper presents a matrix formulation for ship vibratory added-mass based on the source distribution method.

For example, the method is applied to a Series 60 hull. The added-mass matrix developed is used in a comparison with the Lewis J-Factor method for onedimension ship vibration.

Paper No. 14. "Effects of Hull and Propeller Design Changes on the Vibration of a Lakes Freighter" by F. Everett Reed, Noel L. Bassett and John A.

SYNOPSIS—This paper reports on actions to reduce the vibration on the Charles E. Wilson. A flowcontrol tunnel was fitted on the original ship. Later, highly skewed blades were fitted to the original controllable-pitch propeller hub. Vibration levels associated with each change, and model, full scale and calculated hull pressures in the flow-control tunnel are reported.

SNAME To Sponsor First E x h i b i t i on In 1982 SNAME has something different in store for the 1982 annual meeting—the organization's 90th.

The society will sponsor an "International Maritime Exposition" to be held in conjunction with the highly acclaimed technical program. It is the first time the prestigious society has opened its doors to exhibitors.

The exhibition will be held at the same site as the annual meeting—the New York Hilton Hotel, on November 17 through 19, 1982. For more information on exhibit space for marine product manufacturers, suppliers, and service firms, Write 90 on Reader Service Card 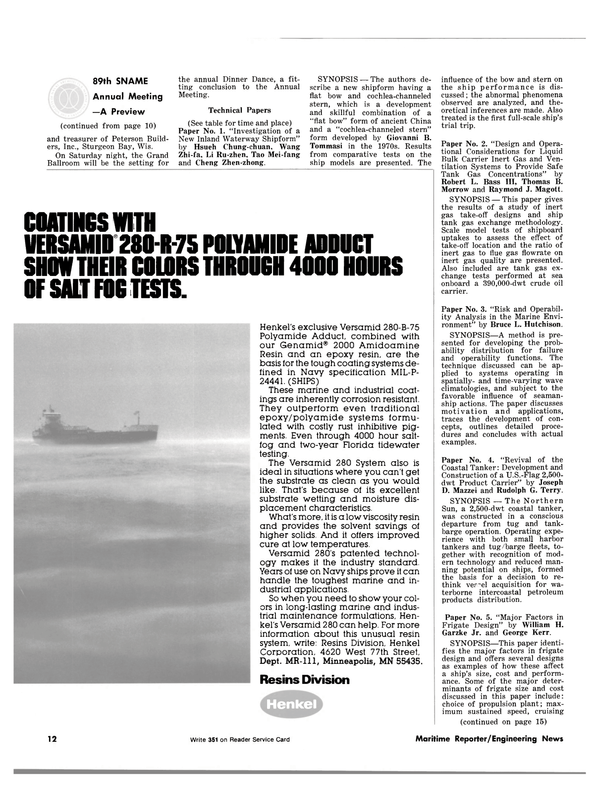