A second coastal tanker designed for windassisted diesel propulsion will be delivered soon by Imamura Shipbuilding, Kure, Japan, to Aitoku Co., owner of the first such commercial sailing vessel.

The second ship, the Aitoku Maru, will take Japanese sail research one stage further and differs in one crucial respect from her predecessor. The first ship, Shin Aitoku Maru, was built with her two masts and sails in place, and performance results could not be compared with any reference data for that ship.

The Aitoku Maru has been built initially as a normal power-driven vessel so that full data on the bare vessel can be obtained before the sails are fitted later.

In hull design, the Aitoku Maru is similar to Shin Aitoku Maru. Propulsion machinery, hower, will be a Daihatsu mediumspeed 60SMA-32F diesel with reduction gear rather than the earlier ship's derated and slow-speed Hanshin diesel engine.

Other changes are a different arrangement of internal hull divisions and a slightly smaller area for the sails when these are eventually fitted.

As in the earlier ship, Aitoku Maru will have two masts with rigid sails, totaling 160 square meters when spread. The design of the first ship was based on a hoped-for 50 percent fuel saving compared with a conventionally propelled vessel of her size.

Since delivery a year ago, she has been employed on coastal services in Japan and sea crossings to China during which extensive tests have been conducted to establish actual in-service results.

On one trial voyage of just over 330 hours, of which about 41 percent was under sail, an average speed of 11.04 knots was attained with an average engine output of 832 bhp, including electric power generation. Displacement of the 1,600-dwt vessel varied between 1,170 and 2,090 tons and the midships draft between 2.65 and 4.38 meters (9 and 14 feet). Average fuel consumption for the voyage was 129.4 liters per hour.

The thrust gained from use of sails reduces main engine output, an effect of an automatic load control computer maintaining a preset ship speed. The computer also can over-pitch the cp propeller so that the slip percentage remains constant.

The sails on the Shin Aitoku Maru are rectangular, laminar flow-type rigid steel and canvas, 8 meters wide by 12.15 meters high.

The main engine is derated from an output of 2,000 bhp at 280 rpm to 1,600 at 250 rpm. Because of the lower engine speed a larger propeller has been used and engine fuel consumption is also helped by the option to use heavy fuel. 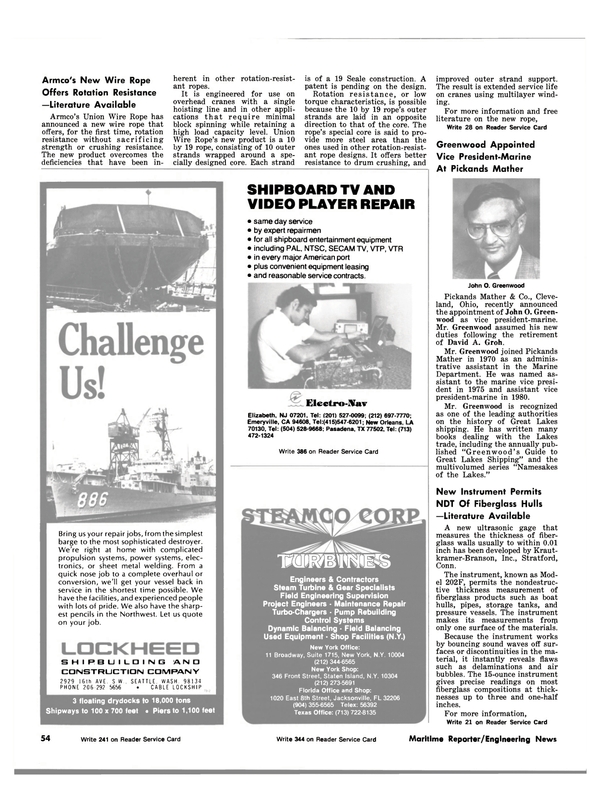