The tug was designed by Nickum & Spaulding Associates, Inc. (N&SA), Seattle, Wash. This trend-setting vessel will have a Voith-Schneider cycloidal propeller system shipped to the United States for use in this U.S.-built and operated commercial tug. The new tractor tug will replace the steam-driven sternwheeler S/S Portland, designed by one of N&SA's parent companies—W.C.

Mid-Coast Marine, Inc., the builder of the new tractor tug, has been constructing workboats since 1956. They are known for a broad range of tugboats built for the logging and dredging industry, as well as for a new line of fishing trawlers which were introduced in 1970.

Nickum & Spaulding has a long history of designing unique workboats.

The firm recently designed a Voith tractor tug, which is currently undergoing sea trials in Singapore. This tug, and her sisters that are yet to follow, will see ship handling service in the Arabian Gulf. Design of the boat for Willamette Tug & Barge, however, has started a West Coast trend as evidenced by other recent building contracts f o r Voith tractor tugs.

This propeller system will enable the tractor tug to move more quickly and precisely while easing ships into and out of their Portland berths. 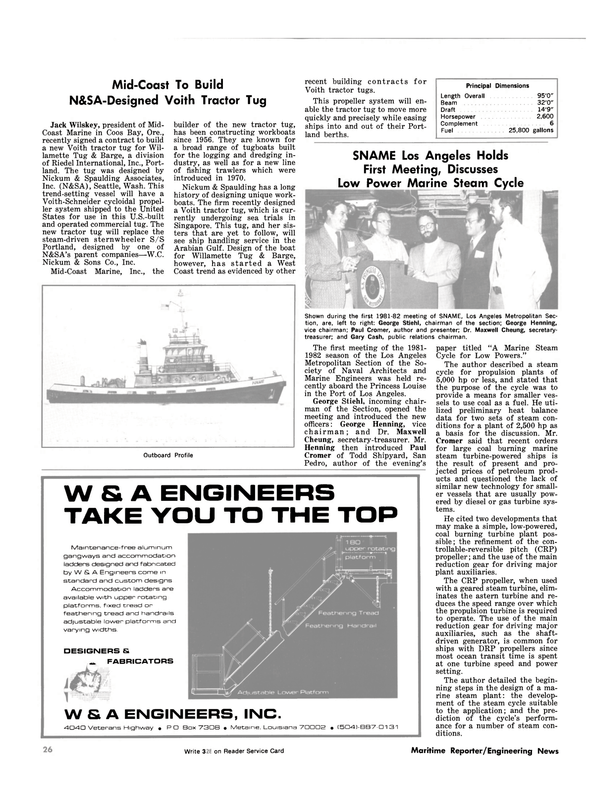