officiated at the ceremony.

The two-crane container facility expands the service at Massport's Paul W. Conley Marine Terminal, known formerly as the Castle Island Terminal, in South Boston. The 105-acre Conley Terminal is a major terminal for the discharge of general cargo—specifically lumber, automobiles and steel.

The new facility at berth 11 within the Conley Terminal includes two 40-long-ton, low-profile Paceco cranes; a 1,000-foot marginal wharf; and an initial 10 acres — potential development of 30 acres — of support area for wheeled storage. It will handle 20,000 boxes annually and increase the Port's handling capacity by 50 percent.

Executive director Davis noted that this was the first major maritime facility to be built in Boston in nearly a decade. "The development of new service facilities is critical to the Port's continuing economic growth,M said Mr. Davis.

"Massport believes in the future of the working seaport, and therefore is making a substantial investment in both new and existing facilities." The container facility is the first development in Massport's $114-million seaport expansion program to be ready for service.

The program includes the $16- million renovation of the Boston Fish Pier, the construction of the $80-million multipurpose Massport Marine Terminal, and the reuse of non-operational port properties such as Hoosac Pier and the East Boston Piers.

The Conley Terminal container facility will be operated by a private terminal operator. 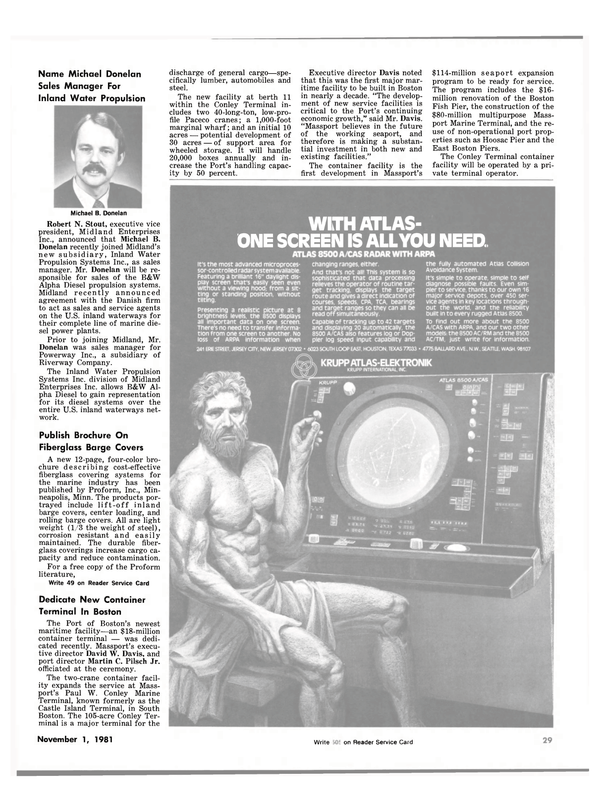