The Sperry Division of Sperry Corporation recently received a $1.6-million contract from the U.S. Naval Air Development Center to integrate the new NAVSTAR Global Positioning System (GPS) capability into the current navigation system aboard a U.S.

Although the initial integration and testing of the GPS capability for surface ships will be clone aboard a carrier, the U.S.

Navy plans to use this program to determine GPS capability for all its military surface ships. Integration programs also are being conducted by the Navy to apply the GPS system to naval aircraft, helicopters, and submarines under separate contracts.

Under the contract, Sperry will develop the hardware and software changes to integrate the GPS satellite receiver with the Ships Navigation and Aircraft Inertial Alignment System (SNAIAS) now aboard 13 Navy carriers.

The SNAIAS currently provides ship's navigation information, as well as providing the initial alignment of naval aircraft navigation systems prior to launching from the carrier.

Sperry will build a laboratory model SNAIAS and then modify the SNAIAS aboard the Kitty Hawk aircraft carrier for at-sea tests of the system, which are scheduled to begin about October 1983.

The NAVSTAR Global Positioning System is a satellite-based ultra-high frequency positioning and navigation system, scheduled to be fully operational in 1986.

Consisting of 18 satellites in orbits 10,900 miles high, the system will be able to provide highly accurate three-dimensional position, velocity, and time data anywhere in the world. 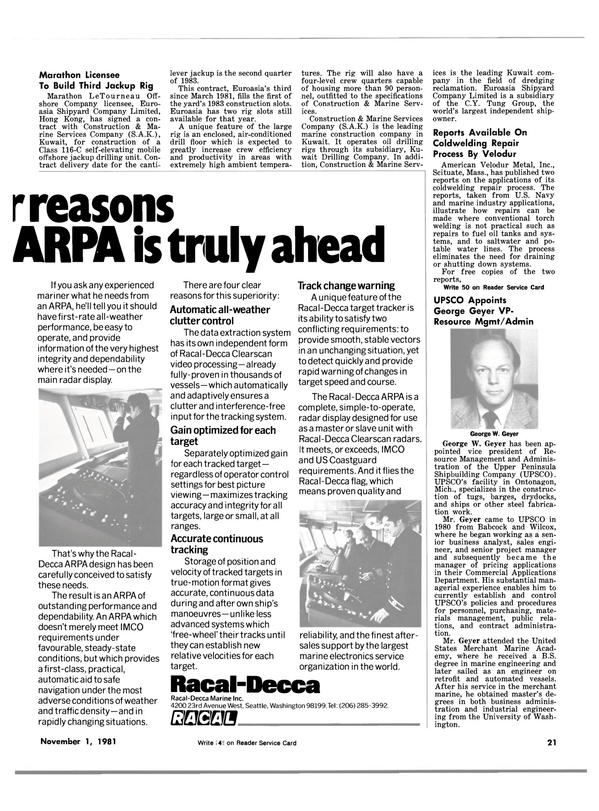