Ralph E. Ablon, chairman of Ogden Corporation, has announced that Ogden's board of directors have approved a plan to distribute the stock of Ogden Marine, Inc. (OMI) to Ogden stockholders.

It is expected that the spinoff will be completed in late December 1983 or early 1984, conditioned upon deliveries of three vessels later in the year, and completion of certain pending financings and other matters. OMI currently owns and operates 29 oceangoing ships approximating 1,780,000 deadweight tons, including 18 tankers, 5 bulk carriers, 3 car/bulk carriers, 2 liquefied petroleum gas vessels and 1 ore/bulk/oil carrier.

Ogden is seeking a ruling from the Internal Revenue Service that the spinoff will be tax-free to Ogden stockholders and expects the ruling to be favorable. The exact record date, distribution date and ratio for the OMI spinoff will be announced later. The OMI shares will trade in the over-the-counter market.

Mr. Ablon said that the spinoff supports the Ogden strategy of emphasizing service activities which are not debt-intensive, capital- intensive or cyclical. He added that the capital commitments required to maintain and expand the OMI fleet would conflict with the services-oriented strategy.

Following the spinoff, OMI's current management is expected to continue. Michael Klebanoff, president of OMI, will also continue to serve on the Ogden board. 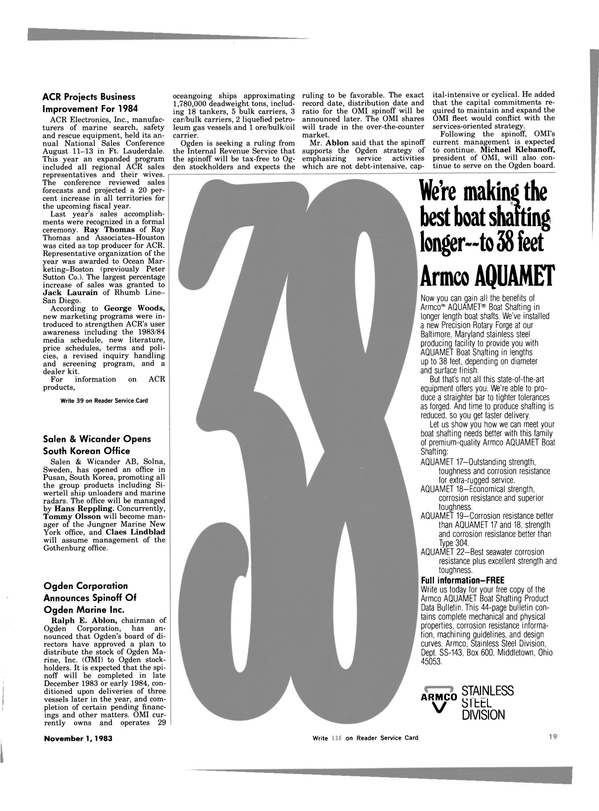