In the keynote speech before the annual meeting of the Warrior- Tombigbee Development Association, Joseph A. Farrell, president of The American Waterways Operators, Inc., warned of two major threats to the future survival of the inland and coastal water transportation industry.

Mr. Farrell stated that recent deregulation of the nation's railroads as well as the Reagan Administration proposals to impose new taxes on commercial users of the waterways could pose serious dangers to the barge and towing industry. "These initatives share one thing in common," Mr.

Farrell said. "They threaten the barge industry's viability as an alternative to the railroads for shipments of bulk freight. They fly in the face of the best interests of the American taxpayers and consumers, who depend on a cheap, competitive transportation system to stabilize the economy." Mr. Farrell noted that the Interstate Commerce Commission (ICC), the federal arm which regulates the railroads, has begun removing rate restrictions on boxcar shipments and rail shipments of coal bound for export. In addition, the ICC has recently allowed the CSX railroad, one of the nation's largest, to attempt to acquire a barge line with which it is in direct competition. Ownership of a barge line by a railroad has, in the past, been prohibited by law.

According to Mr. Farrell, this trend toward deregulation of the railroads could have serious and long term effects on competition among the various forms of transportation, and on the nation's economy as a whole. Deregulation in this instance, Mr. Farrell said, will allow the railroads "to exercise ever-increasing monopolistic powers." Mr. Farrell told the Warrior- Tombigbee development group that a second threat to the barge industry, an Administration proposal to impose additional user fees, was "ominous." Currently, the barge industry pays a fuel tax of 8<2 per gallon for use of the waterways.

Under the new proposal, the Administration would hope to recover 70 percent of federal expenditures from the barge industry, a move Mr. Farrell claimed could put the barge lines out of business.

"We in the industry agree with the principle that the users of a transportation system should pay their fair share of the costs for that system," Mr. Farrell said. He noted however, that no accurate accounting of the cost allocation among various beneficiaries of the waterways has ever been determined, and that his industry would fight against any new taxes unless and until such a fair allocation of costs is determined.

Mr. Farrell is president of The American Waterways Operators, Inc., the largest national trade association representing the interests of the barge and towing industry and the shipyards that service the industry. 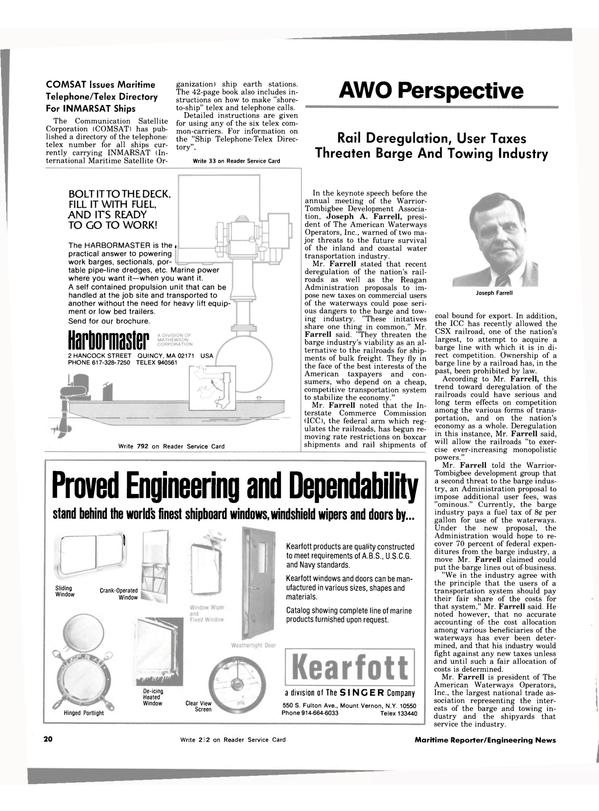