A unique 350-foot self-loading barge for Matson Navigation Company's interisland cargo service in Hawaii will be built by Mc- Dermott, Inc., of Louisiana, at a cost of nearly $6 million.

The barge will have capacity to carry 216 containers of various sizes, including dry and refrigerated containers and auto frames, plus 1,700 long tons of molasses.

Construction of the barge is scheduled for completion next August. An innovative ondeck revolving crane will be built under a separate contract. Bids from crane manufacturers throughout the world are being reviewed. The completed barge is expected to be ready for service from Honolulu by the end of October.

It will be named Haleakala, for Maui's famous mountain.

The barge will be built in three sections ir different McDermott yards: the bow section in New Iberia, La., the stern section with machinery in Morgan City, La., and the midbody in Gulfport, Miss., with final assembly in Morgan City.

The barge, towed by a chartered tug, will supplement Matson's containership Mauna Kea in transshipping Pacific Coast-Hawaii cargo between Honolulu and the islands of Hawaii, Maui and Kauai.

New features designed by Matson engineers include movable cell-guides to secure containers on deck, the revolving crane that will keep containers parallel with the barge during loading and unloading and a radio-controlled stern-thruster to assist in docking operations. 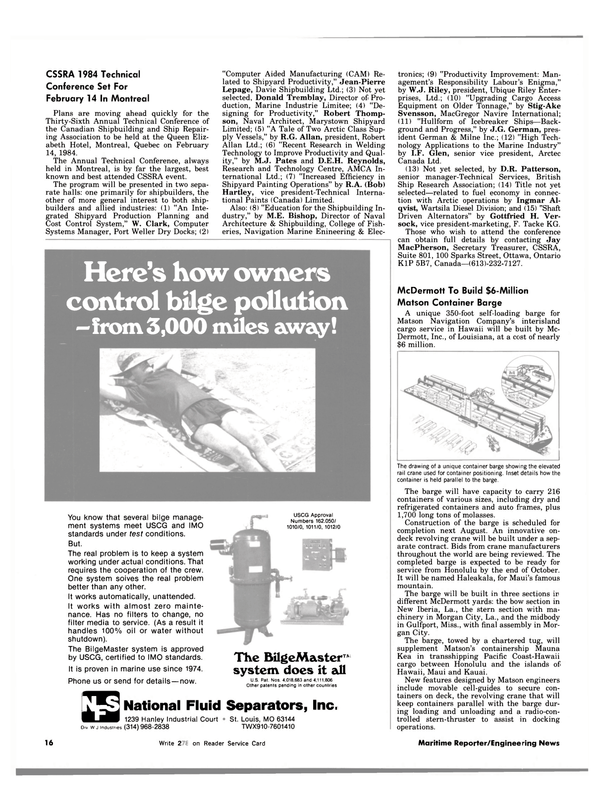