This rig is owned jointly by Sedco Inc. and Occidental Exploration and Production Company.

Mrs. Sally Martin, wife of the president of Occidental, christened the rig.

Designed by Earl & Wright, the new rig can operate in water depths of 25 to 180 feet. The mooring tensioner riser, and drill fluid systems have been designed for exploratory and development drilling to 20,000 feet. The design of this semisubmersible makes it particularly useful in parts of the world where drillships are inefficient and the cost of using semisubmersibles uneconomical.

The Sedco 602's main deck measures 170 by 170 feet. It has living quarters for 88 crew members and other facilities that include a hospital and a recreation room with cinema area. Sophisticated equipment onboard includes a closed circuit television and satellite communications system. The rig is equipped with two deck cranes having booms of 100 feet and lifting capacities of 50 tons. Also fitted is a helideck able to take the weight of a fully loaded Sikorsky S-61N helicopter.

Sedco 602 is classed by the American Bureau of Shipping and is built to requirements and specifications of the U.S. Coast Guard and the Intergovernmental Maritime Organization.

It will operate first in the Philippines then go to China for drilling operations.

This rig is the third semisubmersible built by Promet. In the first half of 1983 the Singapore yard delivered two similar rigs of the SEDCO 600 series.

Sedco Inc. is one of the world's largest inter- national drilling contractors, operating a fleet of more than 40 offshore units around the world. Occidental Exploration and Production, established for 22 years, is well known in the field of oil exploration, production, and refining. 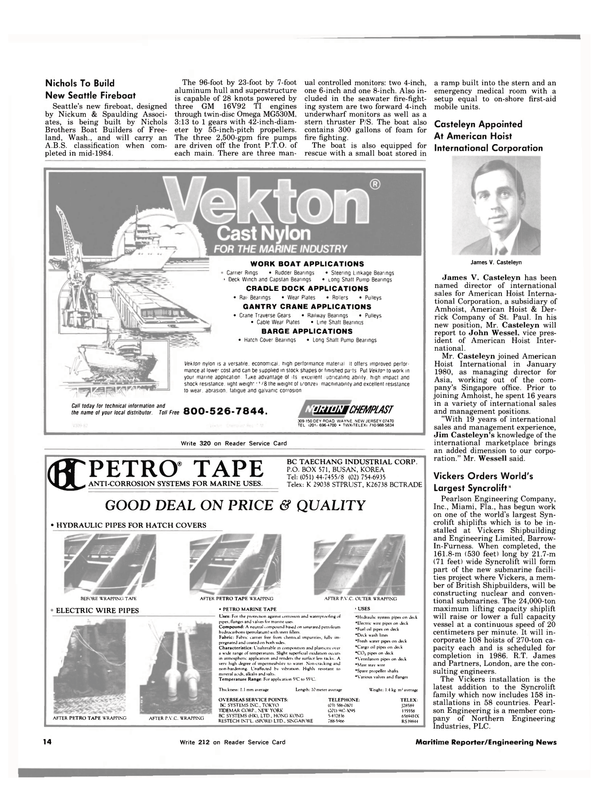