Adm. Harold E. Shear, USN (ret.), Maritime Administrator, announced recently that the Maritime Administration (MarAd) and Farrell Lines, Inc., of New York have signed a cooperative agreement under which the steamship company will commercially test the feasibility of carrying oversized cargoes in the holds of containerships in its regularly scheduled service. The tests will employ a system called Sea Shed (see MR 3/1/82, p 65; 12/15/82, p 6).

MarAd and the Naval Sea Systems Command will jointly fund the $550,000 project, tentatively scheduled to begin in November and to continue through April 1984.

In the operational/commercial sea testing phase of the program, the government will pay for engineering, design and installation of ship modifications, test planning, training, data collection and analysis.

At no cost to the government, Farrell Lines will provide three vessels to be modified and to carry Sea Sheds and cargo, marketing to acquire cargo, all handling and lashing of cargo, supervision and support personnel and services.

The "universal adaptor" to be developed will minimize vessel modifications and allow most existing containerships with 40-foot container cells to accommodate the Sea Shed system.

Farrell will modify three containerships sailing regularly in its U.S. East Coast/Mediterranean service—the Argonaut, Export Patriot Patriot and Export Freedom. The modifications, to be made at the lines' Port Elizabeth, N.J., terminal, will include the strengthening of cell guides (used normally for standard containers) and electrical work.

As a portable tween-deck system, a Sea Shed fits into three adjacent cells of a containership.

When stacked in the vessel, cargo is passed through and stowed at different levels by opening and closing Sea Shed's work through floors.

Farrell will have the option of stacking three Sea Shed prototypes in the same location in a single ship or utilizing them singly or any feasible combination of two or more aboard the test vessels simultaneously.

The liner company will offer service to shippers of large sized cargo beginning with the' sailing of the Argonaut (tentatively in early November) from Norfolk, Va.

M. Rosenblatt and Son was the design agent for the Sea Shed system.

The prime contractor for program development is Information Spectrum, Inc., of Arlington, Va. 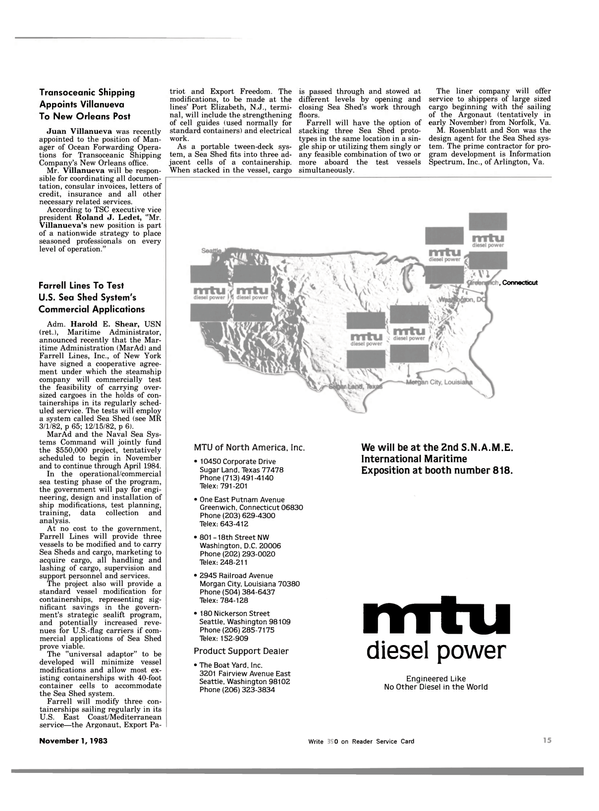