Each system consists of a Westinghouse Hagan Model 218 Heavy Duty Oxygen Analyzer and a Model 1400 Microprocessor-Based Oxygen Trim Controller. The systems were installed on the Marmacsun boilers in June 1981.

The S.S. Mormacsun is 39,000 tons, operates at an average speed of 15 knots and burns approximately 16,600 gallons of fuel oil per day. Prior to installation of the combustion control systems, the air-to-fuel ratio in. the boilers' combustion processes were manually adjusted based on visual observation of flue gas and the use of a hand held flue gas sample extraction analyzer. Excess oxygen in flue gas is an excellent indicator of combustion efficiency since it is directly proportional to excess air. Some excess air is necessary for safe smoke free operation. Too much excess air results in large dollar losses because extra fuel is burned needlessly to heat this excess.

Moore MacCormack engineers estimate the air-to-fuel ratios in the two Mormacsun boilers were being operated at 4% excess oxygen.

"We knew that existing automation just wasn't accomplishing maximum efficiency. So we began to seek methods of automatically adjusting the air-to-fuel ratios," said Erny Otterspoor, manager of Energy Conservation for Moore MacCormack Lines, Inc. "The Westinghouse system is operating quite well after its initial start-up period." The first step in upgrading the boiler combustion control systems involved the installation of the in situ oxygen analyzers. The Westinghouse oxygen analyzers utilize a zirconium oxide sensor inserted directly within the flue stack. They provide quick, continuous readings of the excess oxygen content in the flue gas. The oxygen analyzer data is fed into the Westinghouse microprocessor-based oxygen trim controller. The unit automatically trims the combustion air flow, regulating the air-tofuel ratio. The combustion trim control systems have consistently controlled the excess oxygen at levels ranging from 2.5 to 3%.

These figures represent at least a 1% reduction in excess oxygen.

Moore MacCormack engineers believe a 1% reduction in excess oxygen produces a fuel savings of at least three barrels of oil per day in each boiler.

"The chief engineer on the S.S.

Mormacsun is quite pleased with the Westinghouse control system," Mr. Otterspoor said. "In fact, he has allowed the boilers to remain on the automatic Westinghouse control system even during maneuvers which certainly shows confidence in the equipment." In addition to the fuel savings, Moore MacCormack engineers believe the Westinghouse combustion trim control system will assist them in complying with the new international Maritime Organization (IMO) regulations that require inert gas systems. These new regulations stipulate that boilers produce flue gas with 5% or less oxygen. This inert flue gas is used to blanket the ullage space in cargo oil tanks. 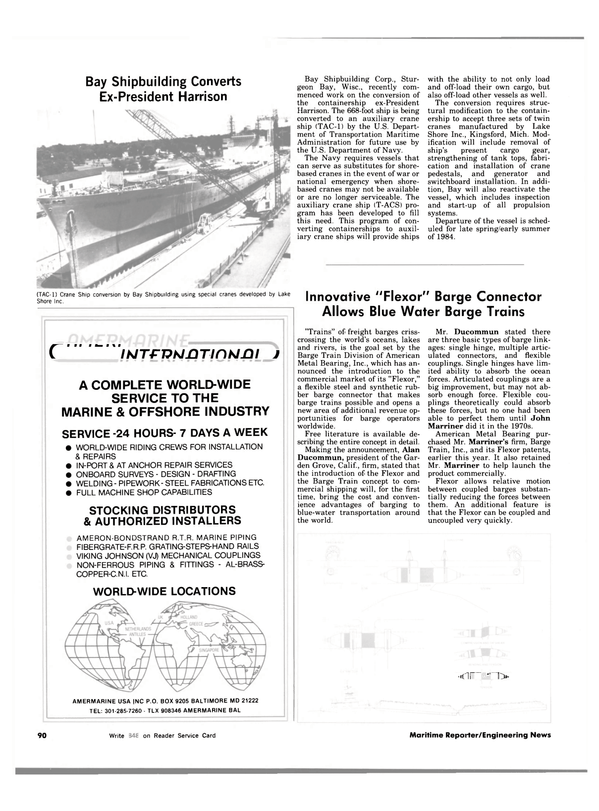