Nacos 20, a new computerized integrated navigation and command multi-processing system for the optimization of navigation and bridge control of both standard and specific purpose vessels, has been announced by Krupp Atlas Electronik.

Integrating a series of navigational sensors and an autopilot within one modular work station consisting of standardized modules, interfaces and operational procedures, it is designed to realize precision navigation at reduced cost while improving overall levels of safety.

A basic configuration comprises two of the latest Atlas Rasterscan radars, the 8600 ARPA and either a 7600 TM or ARPA unit, which are the only systems to offer continuous true daylight rasterscan viewing on a 16-inch screen; a doppler log; an echosounder; an Adaptive Radar Controlled Autopilot (ARCAP), for which the 8600 ARPA additionally provides input and monitoring functions; and a central control console embodying a full-color Navigation Information Display (NID), together with interfaces for other sensors and bridge equipment.

Among key functions fulfilled by the system are determination of actual position from up to three inde- pendent primary sensors such as Loran C, Decca and Satnav, in association with an Atlas doppler log and a standard gyro system. Longterm route planning for deep sea operations by waypoint input and short-term maneuvering and track planning in coastal waters are also possible, the latter using predictive input from the 8600 ARPA.

Other main functions include automatic track control via either the 8600 or ARCAP facility, with error limits and alarms depending on the precise operational mode; collision and avoidance alarm together with comprehensive, easily assimilated indicaton of navigational and other ship's data on the NID. Using a common data bus, the system also provides for functional integration of other ship's systems such as those for administration, communications, engine control and centralized monitoring. Its flexible design concept additionally allows for integration of future generations of navigational equipment, including the Navstar GPS.

Primary aims of the system are directed towards the consolidation and control of both routine and specific data from various sources for central display at a console designed for one-man operation. A decentralized, redundant processing of operational data principle is employed in which various key function areas are grouped organically and provided with relevant hardware for processing, operation and display.

Incorporating extensive on-line self-test facilities and designed to comply with DoT, DHI, USCG and other leading specifications, NACOS 20 provides simple costeffective installation and integration with other systems in a ship while also allowing for reduced cost for overall system maintenance and personnel training.

Partly developed under sponsorship of the West Germany Ministry of Research and Technology's "Ship of the Future" project, a system is scheduled for installation on Krupp Atlas Elektronik's own research vessel, MS "Schall", this December. 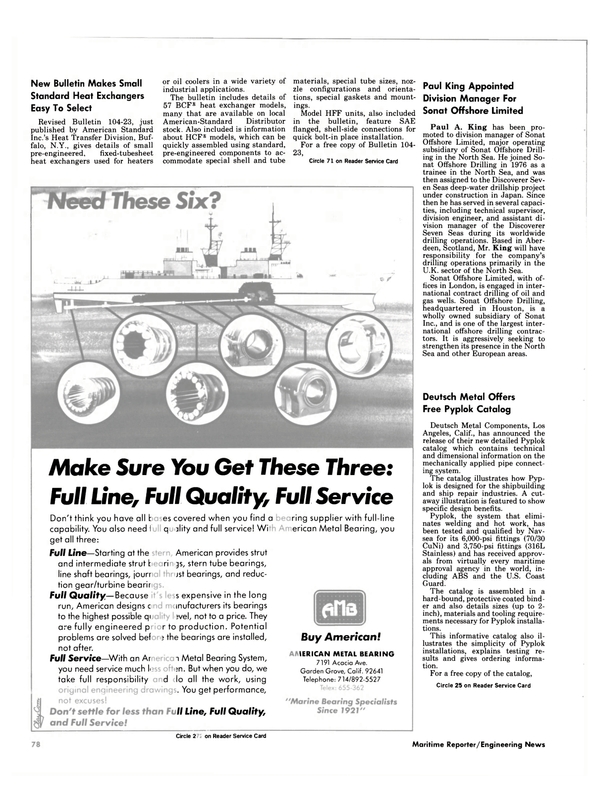