The 92nd Annual Meeting and Third International Maritime Exposition of The Society of Naval Architects and Marine Engineers will be held November 7-10,1984, at the New York Hilton Hotel.

The exposition, with more exhibitors than ever before and a larger number of firms from overseas, will cover the entire exhibit space of some 26,000 square feet on the second floor of the Hilton. A new feature this year will be the posting of directional signs to make it easier for visitors to find their way around the exhibition, which has shown a steady growth since its inception in 1982. This year some 165 exhibitors will show their products and services to an attendance expected to top 3,000. Registration for the Annual Meeting includes free admis- sion to the exposition, which will be open 2-6 pm on November 7, 10 am to 6 pm on November 8, and 10 am to 4 pm on November 9.

The Society's Papers Committee has selected 13 papers to be pre- November 1, 1984 sented on November 8th and 9th in the Trianon and Mercury Ballrooms on the hotel's third floor. Among the topics to be discussed are the cause and correction of propeller-induced vibration, noise reduction for U.S.

At the luncheon on Thursday, November 8, SNAME president and chairman/chief executive officer, NASSCO, Larry French will deliver the address, and several important awards will be made. Following the President's Luncheon a Busi- ness Session will be held in the Grand Ballroom, where the new SNAME president for 1985-86 will be elected. This session will be chaired by Mr. French, and will include a report of the elections that occurred at the Council Meeting on November 7, consideration of the proposed amendments to the Bylaws, and other such business as may be introduced by the chair.

At the Annual Banquet in the Grand Ballroom on Friday, November 9, the Society's highest awards will be bestowed. The David W.

Taylor Medal "for notable achievement in naval architecture" will be awarded to Jan D. Van Manen, professor and managing director of the Netherlands Maritime Research Institute. The Vice Admiral "Jerry" Land Medal "for outstanding accomplishment in the marine field" will go to Lester Rosenblatt, chairman of the board of M. Rosenblatt & Son (past president of SNAME). John V. Wehausen, recently retired professor of engineering science, University of California, Berkeley, will receive the Davidson Medal "for outstanding scientific accomplishment in ship research." Following the awards presentations and acceptance speeches, president French will introduce the banquet speaker, VADM James B. Stockdale, USN (Ret.), one of the Navy's most decorated officers.

A ladies' hospitality room will be located in Suite 524/526, and will be open from 9 am to 4 pm on Thursday and 8 am to 4 pm on Friday. A spouses' tour of Lincoln Center has been planned for 9:30 am to 2 pm on Friday, November 9, ending with a luncheon at the Adagio Cafe in Avery Fisher Hall of the Center.

The final event of the Annual Meeting will be the Dinner Dance to be held at 8:30 pm on Saturday, November 10 in the Grand Ballroom.

A reception (no host) will precede the dinner, beginning at 7 pm in the Grand Ballroom Foyer.

SYNOPSIS—This paper discusses mathematical modeling of diesel engines for use in computer simulations of marine propulsion tran- sients. Modeling is founded on basic thermodynamic and fluid flow principles, aided by empirical relationships as necessary. Equations for several engine variations are presented, and evaluation of their constants from engine performance data is outlined.

This paper traces the development of the ships' design, with particular emphasis on the cargo and related systems. It also explores the contractual relationship between the owner and the shipyard.

SYNOPSIS—This paper presents the results of a comprehensive investigation of wind effects on a contemporary semisubmersible drilling vessel design. Wind loads were measured on a wind tunnel model as a function of draft, heading, inclination, and deck arrangement. Scale and lift effects, and effects related to the representation of the sea surface were critically analyzed. The measured wind loads were compared with loads obtained using two classification society procedures.

SYNOPSIS—A systematic series of high-speed hull forms has been model tested at the Maritime Research Institute in the Netherlands.

The series has been designed to possess both good calm water resistance properties and to have favorable seakeeping characteristics. This pa- per illustrates the thoughts underlying the selection of main hull shape parameters, the build-up of the series, and typical results in both fields. Ship motion computations were carried out in parallel, and a correlation is provided.

SYNOPSIS—This paper traces the progress of the Society's Technical and Research Program since its inception.

It provides an up-to-date overview of what is taking place in each of the T&R panels and ad hoc committees, thereby presenting the diverse activities to SNAME members at large. Finally, the paper provides a look at the future needs and the Program's potential to continue to serve the members and their profession.

SYNOPSIS—In converting the Maersk "E" class of ships, the ship was lengthened and the engine rerated to maximum output. The increase in power plus the effects of lengthening the hull required the design of a new propeller—one which would minimize the pressure forces generated by the propeller.

Identifying the cause of the large two, three, and four times blade frequency pressure forces, and designing a propeller to ameliorate them is the subject of this paper.

The propulsion diesel noise is shown to be effectively controlled by special vibration isolation mounts. Propeller- induced noise, while not directly treated, is addressed, as well as an investigation into a "singing" propeller.

SYNOPSIS—Ice impact pressures have been measured on the U.S.

Coast Guard icebreaker Polar Sea in heavy Arctic ice conditions. This paper presents an anaylsis of the results and proposes a general algorithm for the determination of loads in multi-year ice based on probability.

The algorithm accounts for ship displacement velocity and bow shape. Ice thickness and strength are included in an alternate approach.

SYNOPSIS—This paper presents results from analytical modeling and full-scale testing of the icebreakers named in the title. The objective was to evaluate the global ice impact force time histories developed during ramming thick firstyear and multi-year ice features.

The method presented herein estimates the components of the total force by extrapolating measured shear forces and bending moments at several sections along the hull to the point of application of the load.

Government and international policies, and attempts to trace both positive and negative effects upon technological innovation in the maritime industries. The policies discussed include trade and cargo, subsidies or other industry assistance, and regulatory policies. The paper describes the present status of these policies and how certain debates are forcing some policy changes.

SYNOPSIS—This paper summarizes the interwoven economic, technical, and human factors that are forcing change in managing the fleets of Northern Europe. The core aim of these changes is to bring productivity into line with high wages.

Lessons we may learn from the European experience offer promise of overcoming the handicap of high wage rates in the U.S.-flag merchant fleet.

Paper No. 12—"Natural Vibrations of Beams in a Fluid with Applications to Ships and Other Marine Structures," by John C.

SYNOPSIS—This paper gives a method for the prediction of the vertical and lateral natural vibrations of a Euler beam in a fluid, based on a simultaneous solution of the mechanical equation of motion of the surrounding fluid. The effects of the fluid on the vibratory characteristics and the impact on vibration analyses are considered, as well as compared to the results of classical approaches.

Paper No. 13—"Implementation of Reliability Methods to Marine Structures," by Y.N. Chen, S.J.

SYNOPSIS—This paper presents a rationale for selecting and calibrating a format of reliability-based strength standards for use in design of ships and marine structures. A comprehensive framework comprising all aspects of reliability methods and code development is discussed.

Typical values and trends of reliability indices and partial safety factors are determined and illustrated for a series of selected existing ships, and also for some designs based on the current rule requirements. 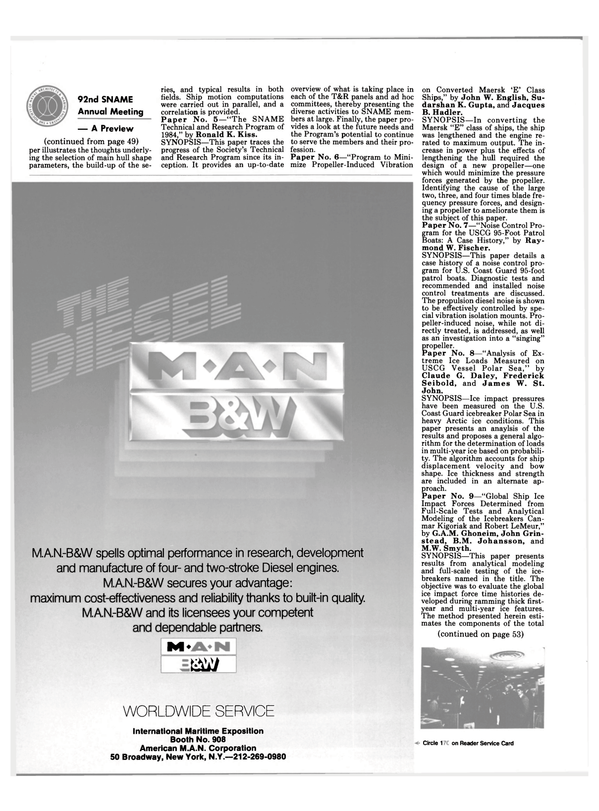