For the second time this year, a newbuilding was launched and another newbuilding was delivered on the same day recently by the Meyer Werft shipyard in Papenburg, West Germany. These newbuildings are two of a series of four passenger vessels ordered by the Directorate General of Sea Communication, Jakarta, Indonesia, for delivery between July 1983 and early 1985." These 1,737-passenger, twinscrew vessels with a cruising range of 5,500 nautical miles at a speed of 20 knots will be used for the Indonesian inter-island service. The first two ships of this series, the Kerinci and Kambuna, have been in service since August 1983 and March 1984, respectively.

In the presence of approximately 200 guests, mainly from Indonesia, the Umsini (the name of a mountain in Irian Jaya) was launched after being named by Mrs. R.A. Soerjati Roesmin Nurjadin, wife of the Indonesian Minister of Transport.

The christening and launching ceremony was followed by the delivery ceremony of the Rinjani in the outer port of Emden, at which the Republic of Indonesia was represented by the Indonesian Ambassador in Bonn, H.E. Ashadi Tjahjadi, who officially accepted the vessel.

These 13,861-grt passenger ships are built in compliance with the regulations of the Indonesian classification society KI, and under the survey of Germanischer Lloyd to the class KI + A 100 1 Passenger Vessel +SM. They have an overall length of about 472.5 feet, beam of 76.8 feet, depth from the second deck of 27 feet, and draft of 19.4 feet.

Main propulsion is provided by twin MaK diesel engines, each with a maximum continous rating of 8,700 bhp. Operating at 85 percent of mcr and 15 percent sea margin, the ships have a service speed of 20 knots. Each of the nine-deck vessels operates with a crew of 145.

For the safety of passengers and crew, 12 motor lifeboats and 38 liferafts with a total capacity of 1,412 and 950 persons, respectively, are provided on board, meeting the highest requirements of the SOLAS 1974 Convention.

The ships are divided into four fire zones. A smoke and fire detecting system is installed in the machinery spaces, cargo holds, and air conditioning rooms. A C02 firefighting system is provided in the engine rooms and cargo holds, while a sprinkler system is fitted in all other areas. In addition, fire alarms can be released manually in all areas of the ships. All are connected to a central fire alarm system located on the bridge, with optical and acoustical indicators. Manual fire door release is provided on the bridge. 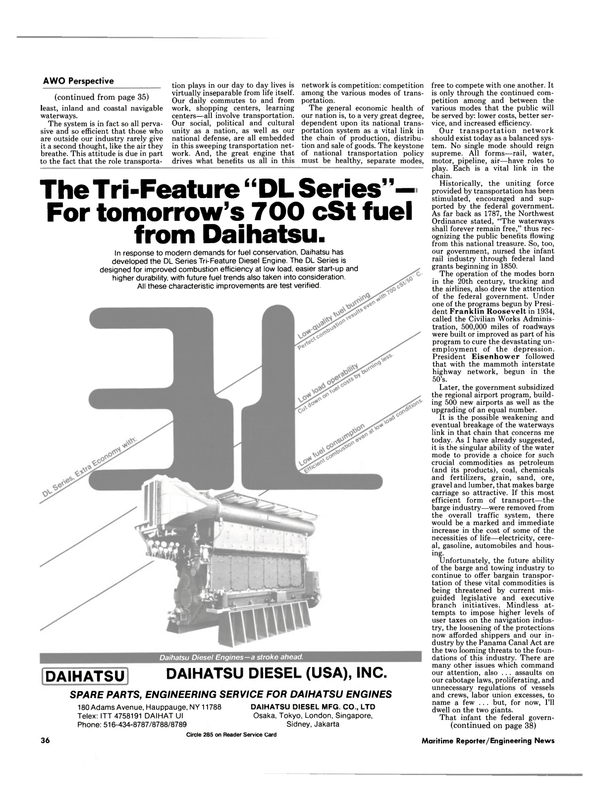