Free Color Brochures Available New 340 Radar Replaces Popular 4016 Series Sperry Corporation has just introduced a new 340-millimeter-diameter radar to replace its popular line of Mk 4016 radars for large- and medium-size ships. Known as the 340 radar, the new system incorporates many of the features that were options on the Mk 4016 series, including a radar interface canceller, a free-footed electronic bearing line, and an off-centering display.

The 340 also incorporates Sperry's new high-brightness display that permits viewing in daylight without use of a hood.

The new radar system will be offered in the full choice of configurations offered in the Mk 4016 series, including X band, S band, and horizontal and circular polarizations. The radar also meets the new International Maritime Organization (IMO) standards that require ships of more than 10,000 gt to be equipped with a radar that has an effective minimum display of 340 millimeters.

The "daylight" viewing option is achieved by having the radar data stored into the system, enabling the radar sweep to "paint" the scope several times with the data.

For further information and a free brochure on the 340 radar, Circle 34 on Reader Service Card New Autopilot Is Highly Cost-Effective System Sperry recently introduced its new SRP-690 Gyropilot® for a wide range of ship sizes. The new unit, which replaces the company's widely used Universal Gyropilot, is a highly cost-effective system that combines the most popular features of the Universal Gyropilot with several new options. The system is packaged in a modular design that permits tailoring of the Gyropilot to the precise requirements of the shipowner.

The modular design also permits easy upgrading aboard ship if additional features should ever be desired after initial installation. The SRP-690 can be operated as a conventional autopilot, or it can make use of an optional, fuel-saving adaptive steering module.

For additional data and free literature on the SRP-690, Circle 35 on Reader Service Card Marine Version of Sperry New Personal Computer Sperry recently announced that is is developing a marine version of its new personal computer (PC). The company's Aerospace and Marine Group has tested and developed modifications to the Sperry PC that will allow it to be used aboard ship. Called the Pelagos, the modified PC is shock-mounted to enable it to survive the vibration and shock of the shipboard environment, and is shielded from electronic interference.

A line-surge suppression module has also been added to protect the computer from the voltage spikes that tend to be common aboard ship.

Sperry's PC, which is rated as 99 percent IBM-compatible, is capable of running thousands of software programs available for the IBM PC. Among those most suitable for marine applications are inventory management programs, payroll management programs, and general ledgers. Using special marine software programs, the Pelagos PC can calculate ship stability and position from star sightings. Sperry has available a program that will allow the computer to format telex messages for voice channels of the marine satellite communications network, providing a ten-fold savings over the use of telex channels—the marine equivalent of "electronic mail." For further information and a free brochure on the PC, Circle 36 on Reader Service Card New Features Added To Ship Control Center Sperry has also recently added new features to its SRP-2000 ship control center, which was introduced in 1983. The system, which is capable of displaying all steering and navigation information from a single console, has been adapted for easier retrofit into existing ships.

Sperry has also added a controlled rate of turn feature to the SRP-2000, allowing a preprogrammed final heading to be fed into the system, along with a precise rate of turn, for more accurate confined-waters maneuvering. In addition, the SRP-2000 can now display fuel management data that is important to increasing efficiency.

Sperry has also developed a new self-synchronized heading repeater for the SRP-2000 that does not need to be reset with the master compass.

For additional data and a free brochure on the SRP-2000, Circle 37 on Reader Service Card 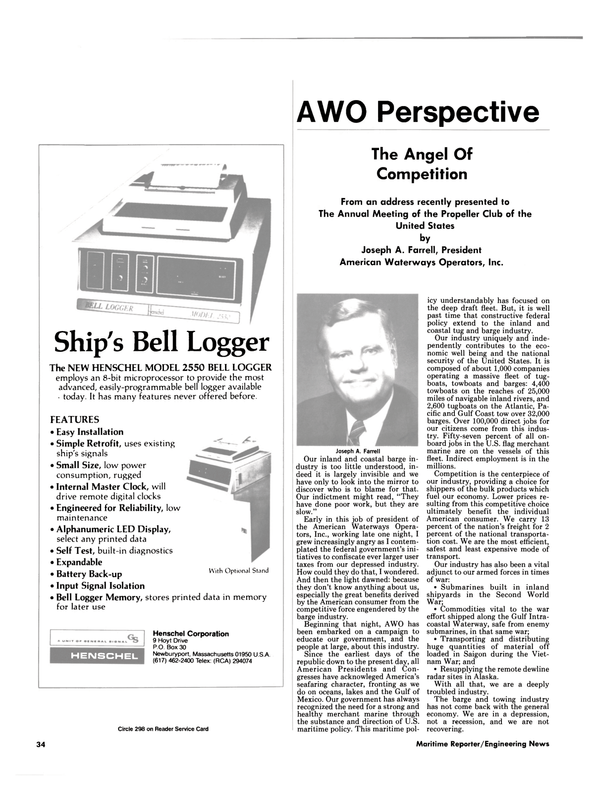