The American Ship Building Company of Tampa, Fla., following the recent completion of a $300-million, five-ship T-5 tanker contract for Ocean Products Tankers of Houston and the Military Sealift Command, has announced its intention to embark on two new major programs.

A company spokesman disclosed that AmShip plans to enter the inter- island trade in Hawaii with American-built, American-flag passenger cruise ships that the company would build and in a joint venture, would own and operate.

Tbe vessels would be constructed utilizing the most modern techniques of ship construction, and would be the first passenger ships built in a U.S. shipyard by American labor in more than 30 years.

Commenting on AmShip's plans, a company spokesman stated: "We have been considering this possibility for some time. The Hawaiian Islands trade is a most attractive situation, and we feel that new ships constructed in American yards, manned by American crews, can operate successfully there. Our estimates show that the first ship could be ready to enter service within 24 months or less." AmShip also announced that following a year-long preparatory research and development study, it intends to enter the business of producing "surumi," a paste made economically from minced fresh fish, high in protein and low in fat and cholesterol, which today is becoming one of the fastest-growing consumer industries in the world. Surumi is a product that is processed from pollack, a fish caught principally in Alaskan waters, which has vast potential due to the range of products in which it can be used, including "imitation" seafood.

The company spokesman stated: "The American Ship board has authorized proceeding with an advanced phase of involvement of our company in this industry, which should place us in the forefront of American companies involved in this fast-growing industry." Construction of the first of the large, oceangoing processing plants to produce the surumi could be completed and in operation within 12 months.

The American Ship Building Company is one of the largest ship repair and construction facilities in Florida, and is one of the major builders of barges on the inland waterways, at its Nashville Bridge Company yard in Nashville, Tenn. 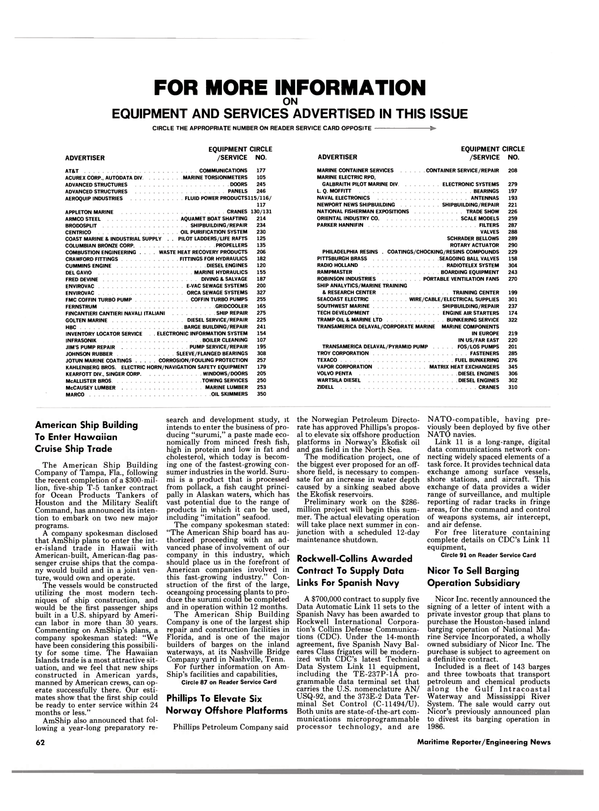