The Military Sealift Command has announced that it intends to procure on the world market during FY 1987 various types of additional ships for the Ready Reserve Force (RRF), in order to meet its final force goal of 120 ships. On January 17, 1986, the Navy spent $206.7 million (U.S.) to purchase 13 merchant class ships to add to the RRF.

The Ready Reserve Force, a subset of the National Defense Reserve Fleet, currently consists of 73 ships.

MSC will buy the most advantageous mix of militarily useful ships from among those offered under the RFP. The Navy will take delivery and become the owner of record of these ships not later than September 30, 1987. In an emergency, MSC would take control of the ships for military use.

MSC's first priority is for clean product tankers, 20,000 dwt-50,000 dwt. Tankers are required in the RRF to support surge and resupply requirements. MSC requirements for FY 92 include 20 tankers. There are eight tankers in the RRF at present.

The second priority is for fast breakbulk ships, which will be enhanced by later modification to provide underway replenishment of ammunition and cargo to Navy combatants.

The third priority is for semisubmersible, heavy lift ships capable of lifting and transporting individual items weighing in excess of 200 long tons. Satisfying this priority will enhance MSC's capability to provide equipment worldwide including over the shore areas where sufficiently sophisticated port facilities are not available. These semisubmersible, heavy lift ships should be capable of lifting landing craft, offshore petroleum discharge systems, floating waterfront facilities (e.g.

DELONG piers) and other outsize equipment.

The fourth priority is for containerships to be converted to auxiliary crane ships (T-ACS). The T-ACS objective for the RRF remains at 12 ships. Two crane ships are in the RRF, one is under conversion, three are programmed for conversion in FY 87, and at least two more for FY The fifth and final priority for MSC procurement is for roll-on/ roll-off (RO/RO) ships. These ships figure prominently in both surge and resupply roles because of their versatility. The priority of the RO/ RO's has been reduced from earlier RFP's since 13 have been recently added to the RRF.

Tanker, heavy lift, and RO/RO ships can be foreign built, but must be reflagged with work done in U.S.

shipyards. All other types of ships must be U.S. built and repair/layup work done in U.S. yards.

Detailed requirements for each ship type will define the minimal operational capabilities and characteristics acceptable to the Government. 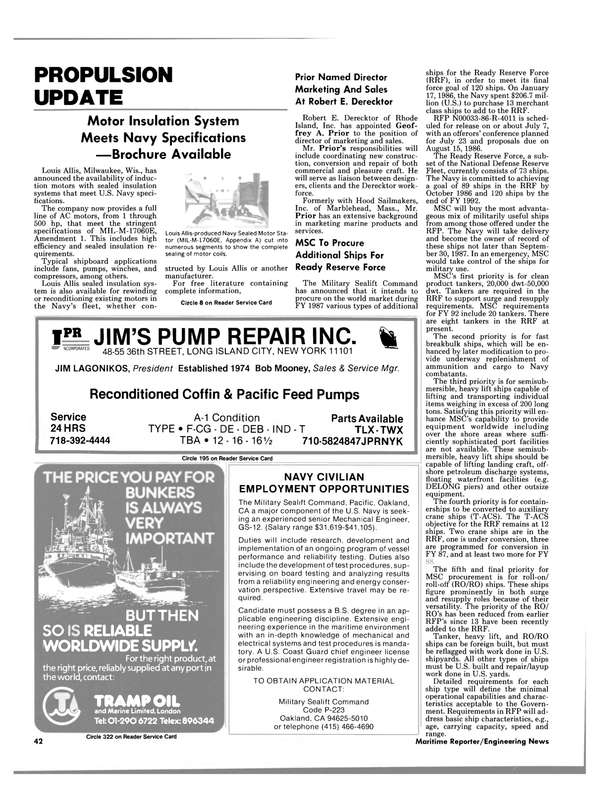