— L i t e r a t u r e A v a i l a b l e— Now undergoing prolonged testing in the Trieste factory of the Grandi Motori division of Fincantieri Cantieri Navali Italiani is a new long-stroke, higher-powered, medium- speed 4-stroke engine covering a power range from 9,900 to 33,000 bhp. With a cylinder output of 1,650 bhp at up to 450 rpm, this BL550 diesel is one of the world's highest-powered, medium-speed engines for ship propulsion or landbased electric power generation.

Rigorous testbed trials are continuing, and GMT director M. Carchidio says that the results are more than confirming predictions.

Orders have already been received for four of these newly developed BL550 engines—two 6-cylinder units for a ferry ordered in Italy by the Italian State Railways, and two dual-fuel (gas and diesel oil) Veetype units for a total-energy plant for Turin. The engines for the ferry are scheduled for testbed trials in October this year.

The BL550 is a further development of the GMT 550-mm bore, 4- stroke engines put on the marine and industrial markets in 1970.

As with all Grandi Motori lowand medium-speed engines, the BL550 is designed and equipped to burn heavy fuel oil. Over the past 10 years research and development efforts have been concentrated on reducing further the specific fuel consumption and improving reliability, with extended operating periods between the need for maintenance or overhaul.

The new engine retains the proven characteristics of the B550 version.

The increased stroke/bore ratio, from 1.07 to 1.15, has enabled the compression ratio to be raised without excess shallowing of the combustion chamber, which have otherwise reduced the volume for effective fuel atomization, but the present design has reduced fuel consumption to 130 grams per bhp hour. However, as a result of a higher maximum combustion pressure and increased compression ratio, GMT's design team confidently predicts a lower value of 124 g/bhp-hr.

Lower fuel consumption and exhaust valve temperatures are the result of an improved pulse-pressure- charging system using the latest turboblowers of greater efficiency, together with readjusted timing for the inlet and exhaust valves.

The frame and bedplate continue to be separate units, and for the inline engines are of nodular cast iron.

Unlike the original designs, the 8- and 9-cylinder bedplates and frames are monobloc castings secured by tie-rods. On the other hand, the Vee-type engines have a welded steel bedplate and a special cast iron frame for which tie-rods are not necessary and are therefore replaced by stud bolts. 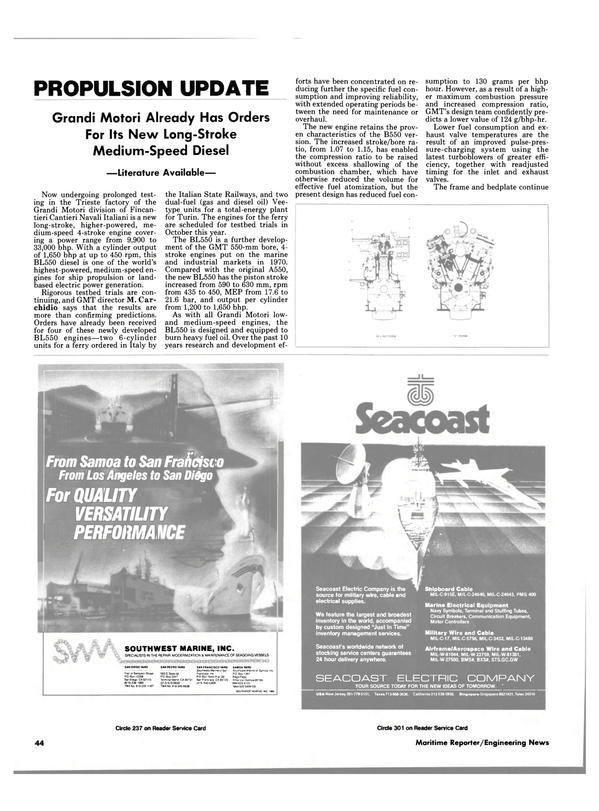