Valmet And Wtirtsilti To Merge Shipbuilding Operations In One Group

Two of Finland's biggest shipyards, Wartsila and Valmet, will merge into one shipbuiding group, with Wartsila taking a controlling 70-percent interest. To begin operations in early 1987, the merger will make the new group a market leader in specialty vessels, according to Wartsila president Tor Stolpe, who is chairman-designate for the merged operation.

In merging with one of its main shipbuilding competitors and eliminating overlapping operations, Wartsila company officials expect the new shipbuilding group to become more powerful and efficient.

Wartsila already produces about 60 percent of the world's icebreakers and some 30 percent of the luxury cruise liners, and is also a builder of ferries, craneships, and offshore accommodations platforms. Even so, the largest Finnish shipyards (the third is Rauma-Repola) represent only some one percent of world shipbuilding capacity. With only a small domestic market for ships, they have survived by becoming experts in several specialty areas of shipbuilding. 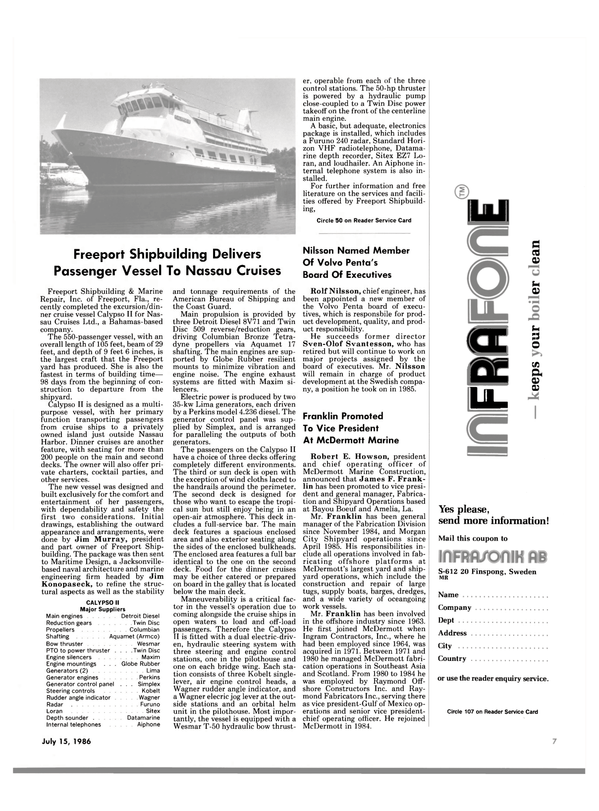 Read Valmet And Wtirtsilti To Merge Shipbuilding Operations In One Group in Pdf, Flash or Html5 edition of July 15, 1986 Maritime Reporter