Each quarter IMA prepares an update on developments in the Navy ship maintenance and modernization market. This article is an excerpt from the most recent update prepared exclusively for publication only in Maritime Reporter.

Composition of FY 1987 Overhaul Program The Navy proposes to fund 37 ship overhauls in FY 1987, the same number as budgeted for this year.

Work Split Seventeen of the 37 planned overhauls are currently earmarked for commercial shipyards. The remaining 20 overhauls are to be performed in naval yards.

The number of ship overhauls to be set aside for public/private shipyard competition will affect the final work split. No figure is currently available for the number of ships to be completed between commercial and naval shipyards in FY 1987.

However, a Navy directive in January specified that the five scheduled SSBN overhauls are to be competed next year.

Navy Reserve Fleet Maintenance The Navy plans to spend $153.5 million on reserve ship maintenance in FY 1987. This will fund four overhauls and 16 SRA/PMAs. These figures are provided in Exhibit 2.

MSC Ship Repair and Alteration Estimated FY 1986 spending by MSC for ship maintenance has been cut from $270 million to $203 million.

Only 22 overhauls are now planned this year. This is much lower than the 42 overhauls approved in the FY 1986 budget.

MSC has estimated that FY 1987 expenditures for ship maintenance and alterations will be $207 million.

This will fund-37 MSC ship overhauls.

The FY 1987 estimate is about the same as the current spending estimate for this year.

Each of the other three surface ships had been scheduled for commercial bid. Probably the most critical competition involves the two frigates. Workload will be very low at Long Beach if these jobs are awarded to commercial yards.

Gramm-Rudman funding cuts may impact the surface ships earmarked for this compeition. They are among the few overhauls scheduled for FY 1986 not yet begun or awarded. These job starts may be the only candidates for deferral.

The analysis was based on 105 regular ship overhauls completed between October 1982-May 1985.

Naval Shipyards Employment in the eight naval shipyards continues to fall. Total employment was 75,860 in June 1985. By the end of 1985 employment had fallen to 72,490. The Navy now projects that employment must decline to 68,000 during this fiscal year to meet budget objectives.

Meanwhile, NAVSEA has directed that overtime in the naval shipyards in FY 1986 be reduced by 3.2 million man-hours. A target of a 6.3 percent composite overtime rate has been set for this year, compared to 10.3 percent in FY 1985.

Small Business Set Asides The Navy has expressed concern to Congress about the impact of setting aside ship maintenance work for small businesses. Mr. Pyatt stated in late February that: One of the challenges we have in maintaining a national industrial base is proper utilization of both large and small businesses. During the past few years, we have properly relied on the capabilities of small business. Now, we find that small business preferences are operating to the disadvantage of the larger firms. The distribution of work is: Our policies need to, and indeed do, take into account a reasonable distribution of work between these two facets of the private sector.

This expression of concern is likely the forerunner of policy initiatives to reduce the number of jobs set aside for small businesses.

Several versions of homeport policy directives were voted through the House and Senate. In its final version Congress told the Navy to bid on a coastwide basis 25 percent of short term maintenance and repair work.

The Navy continues to oppose change in homeport policy—but there are indications that political pressures will be too great to ignore.

Strategic Homeporting The General Accounting Office has questioned the Navy's plan to develop additional homeports. In a March appearance before a congressional subcommittee, a GAO official stated: Our review leads us to an overall conclusion that the Navy needs to better demonstrate the strategic benefits of new homeports and to prepare more definitive and complete cost estimates as a basis for proceeding further.

Based on analysis of Navy cost data GAO found it would be "considerably less costly to accommodate the two carrier groups and three battleship groups in existing homeports than to establish new homeports for them." T O ORDER NAVY M A R K E T I N G REPORTS I n t e r n a t i o n a l M a r i t i m e Associates, Inc.

is a management consulting firm. It specializes in market research and corporate planning. Among its clients are electronics and machinery manufacturers, shipbuilders, and systems integrators. 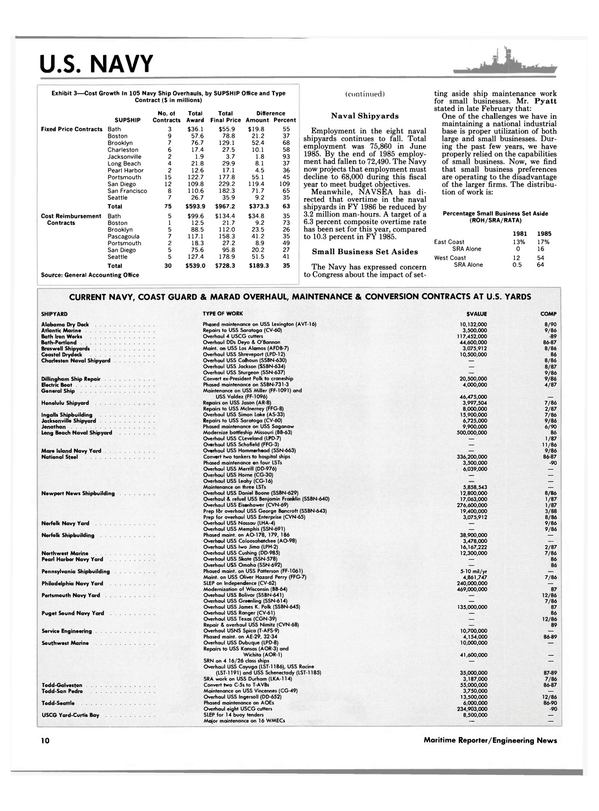