The Spring Meeting of the Great Lakes/Great Rivers Section of The Society of Naval Architects and Marine Engineers was held recently in Louisville, Ky. On the eve of the meeting an Early Bird reception was hosted by American Commercial Barge Lines, Cummins Engine, Falk, Western Diesel, and Whayne Supply.

Attendees were then brought up to date on plans for the 1988 Spring Meeting-STAR Symposium that will be hosted by the Section in Pittsburgh in June 1988. This will be the first internationally sanctioned STAR Symposium; its theme will be to emphasize the truly worldwide nature of the marine industry in general and marine engineering in particular.

The technical portion of the meeting featured the following papers: "High-Performance Rudders— With Particular Reference to the Schilling Rudder," by Peter Bingham of Industramar (presented in his absence by Thomas Mackey); "Aeromarine System as Installed on M/V Hoosier State," by Robert Hertzberg of Cargo Carriers; "Waste Heat Recovery System," by Prof. John Woodward of the University of Michigan; and "Gensets for Uni-Fuel Operation and the Flexible Layout," by Edward Waryas of American M.A.N.

Following lunch the members and guests departed for a tour of the General Electric appliance assembly plant, where the state of the art in both the application of large-scale industrial robotics and employee relations were demonstrated. 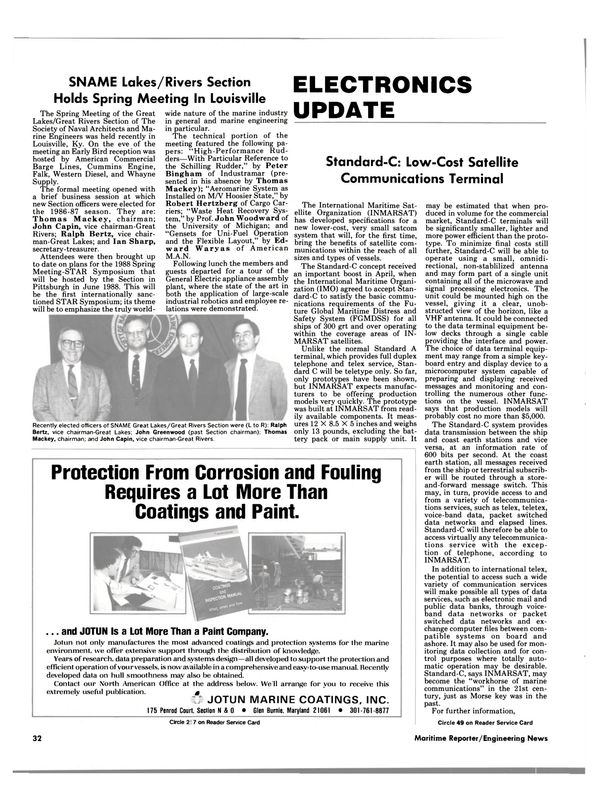