— L i t e r a t u r e A v a i l a b l e— The bridge of most ships contains a varied assortment of individual instruments for navigation, monitoring and ship control which have been added, one or two at a time, over the years to meet carriage requirements and perceived needs.

This multiplicity of equipment, with different layouts and procedures from ship to ship, can lead to confusion and occasional errors, as bridge watchstanders must rush back and forth from one station to another.

It has long been recognized that a movement toward standardization and integration would be desirable for bridge electronics. Integrated bridge systems, which bring together in one place the coordinated information and data from various sources, would greatly enhance the safe and efficient operation of the vessel, while reducing workloads and minimizing human error.

A leader in this area has been the Racal Marine Group, which has been developing and manufacturing commercial marine navigation and radar equipment since the mid- 19408 and has been working on integration in these devices for many years. In 1971, Racal started a development program on an integrated bridge system, called MANAV, which received support from the U.K. government and culminated in sea trials on the ship Esso Mersey. These were in general successful, the system receiving the approval of ship's staff, who especially appreciated the ready interaction between an automatic chart table and the radar display. But the concept was judged to be ahead of its time, and production was not undertaken although a military version was developed for the British and other navies.

A decade later, Racal decided that the time was ripe for another look at the integrated bridge. A short feasibility study confirmed this and recommended that the project should be extended to cover three other principal operational areas of a ship.

Accordingly, in 1982, an R&D effort was set in motion, looking into the use of electronics in the four ship operating areas—bridge, machinery spaces, cargo and administration.

This resulted in three-month sea trials aboard the ship British Trent.

Concentrating on the two main areas of bridge and machinery, the trials aimed to foresee the principals and requirements of the 1990s.

The integrated bridge electronics developed out of this program included a workstation comprising a high-definition color graphic VDU acting as a command display and showing the master or watch officer a composite picture of the immediate information he needs: course, under-keel clearance, distance/ course to next waypoint, speed, engine RPMs, etc. This involved two computers and associated VDU and keyboards, with inputs from a Racal- Decca ARPA, compass, log, Decca Navigator, satnav and engine room sensors, with outputs to the ARPA, autopilot and satellite communications terminal. Ship's position was displayed both in latitude/ longitude and pictorially on the electronic chart, and the auto-route keeping was included, with alterations being made automatically between waypoints. An economics page could be called up on the computer, giving an assessment of performance and economics via bar graphs comparing the actual performance with results of the ship's original sea trials in terms of fuel consumption, propulsive power at a particular speed and fuel consumption vs. distance through the water.

In turn, this information was converted into economic terms based on fuel costs. From this, it was possible to see such things as the degree of performance degradation due to hull fouling and the effect of speed and trim alterations. This was considered a useful tool for a master in costing the results of operational decisions. Data could be transmitted automatically at high speed to the company's head office via satellite.

On the British Trent, the ship's staff found the command display to be very useful and were of the opinion that the presentation generally gave all required information to the watch officer. Within certain limitations, the electronic chart worked well, and many of its facilities were also appreciated. There was general agreement, however, that this presentation could not currently supersede the standard paper chart. The presentation of passage economics aroused most interest, giving ship's staff an increased awareness of the importance of cost as a function of speed. This would help them make more economic speed decisions.

The valuable experience gained on these sea trials was embodied in the specification which laid the foundations of the full development of Racal's new integrated ship electronic system (ISES). This is a "family" of systems covering the bridge, engine room, cargo and ship administration, through standalone systems or as an interconnected network. An essential element in this family is the integrated bridge electronic system (IBES).

The IBES includes a navigational positioning system, an ARPA radar, an autopilot and an optional automatic chart table. It is available in two versions—the basic IBES 100 and the more extensive IBES 1000.

IBES 100 is centered on the Racal- Decca MNS 2000 marine navigation receiver, which integrates Decca, Loran-C, Transit, Omega and dead reckoning, depending on available input data and position on the earth's surface. This processor is connected to the ARPA, on which the operator can view, on demand, a video presentation of a cross-track error and intended track. It can also be connected to a Racal-Decca referenced adaptive autopilot to provide automatic track keeping. The automatic chart table, when fitted, shows the ship's position continuously as a spot of light projected below onto a standard hydrographic chart. Up to 100 waypoints can be stored, and the ship can steer automatically along prescribed routes.

In addition, own-ship's position, GMT, course, speed and the next five waypoints are all continually available in digital form for use by other devices, such as an EPIRB and administrative area systems, if fitted.

The IBES 1000 is centered on one or more workstations, each including a color graphic display and powerful data processing capabilities.

These communicate with an ARPA, autopilot, automatic chart table and other navigational sensors. The small but powerful processor unit that drives the system is able to operate up to five workstations.

Each workstation consists of a color monitor with an extremely flexible page accessing system, a specialized keyboard and cursor control device.

They can be free-standing, tabletop or console mounted, with the processor fitted internally or as a separate unit.

Other hardware included in a typical IBES 1000 consists of two interswitched radars, one of which is normally an ARPA, one MNS 2000 navigation receiver, one automatic chart table, one adaptive autopilot and associated steering system, and two gyrocompasses. Optional equipment includes a printer for data logging and additional radar displays.

The integrated bridge electronic system can communicate with and show data from other ships' systems.

The integrated ship instrumentation system (ISIS) can be used for monitoring and control of main and auxiliary machinery, cargo and ballast from one or more locations, trend analysis, condition and performance monitoring of hull and machinery.

Racal emphasizes that these integrated electronic systems can be supplied individually for standalone use, or if two or more of them are fitted, they can be integrated to allow transfer and correlation of data between them. The result is an integrated ship electronic system providing economic, efficient and flexible operations. 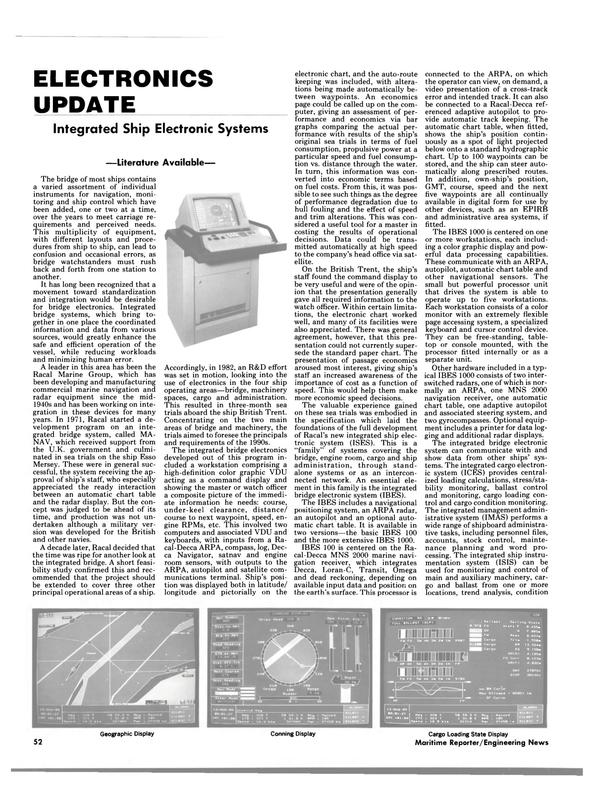