An Update On U.S. Navy Spending For Ships And Equipment In FY1989 The U.S. Navy continues to be the driving force for shipyards and many equipment manufacturers.

Ship Procurement The Navy has requested funds to build 17 ships and lengthen two fleet oilers in Fiscal Year 1989. A budget of $9.1 billion for ship procurement is proposed. Details for the ship procurement budget for FY 1988 to 1992 are shown in Exhibit 1.

Some changes from last year include a more than 14 percent cut from the fast combat support ship (AOE) budget. The Navy had planned to budget $425.4 million for the AOE program—but reduced the funding level to $363.9 million in this year's budget request. The TACS crane ship conversion planned for FY 1989 was dropped due to budget pressures. Funds for strategic sealift were also dropped—largely as a reaction to a hotly contested decision which transferred control over the Ready Reserve Fleet (RRF) from the Navy to the Maritime Administration.

In early April, the House Armed Services Committee recommended the Navy ship program be approved— with the exception of the proposed oceanographic ship. The Navy has asked for $74 million to build one SWATH-design AGOR research ship. The committee recommended against this funding on the basis the design was not fully developed.

The Senate Armed Services Committee bill completed mark up in late April— and the Senate bill essentially similar to the House version.

Both the House and the Senate must act on the Committees' authorization bill recommendations. Each chamber will vote on an authorization bill. Differences between the two bills will be negotiated by House/Senate conferees. A compromise final version will be sent to the President for signature. An appropriations bill must also be passed by each chamber, providing funding for ship and other defense procurements.

The House Armed Services Committee has recommended the addition of one Army logistics support vessel (LSV) in the FY 1989 program.

Four of these ships are under contract to Moss Point Marine, a member of the Trinity Industries' shipbuilding group. The Army has indicated that a fifth vessel is required.

In other ship programs, more than 90 Navy ships are under construction at U.S. shipyards. Full details are provided in Exhibit 2.

Weapons & Support Equipment A total of $11.1 billion has been requested in FY 1989 to buy missiles, torpedoes, electronics and other support equipment. This is an increase of $600 million over FY 1988.

From FY 1983 through FY 1987, there has been a clear decline in the number of overhauls—while the number of short term availabilities has increased significantly. In FY 1988, the number of both overhauls and SRAs/PMAs is expected to decline.

In FY 1989, SRA/PMA job starts are projected to increase somewhat over this year.

Almost $600 million has been cut from the Navy active fleet ship maintenance and modernization plan for FY 1989. Most of the cuts are in the area of ship alterations— where planned spending has been cut from $1.6 billion to under $1.1 billion. The trend toward fewer overhauls and more short term scheduled availabilities continues.

Details are shown in Exhibit 3.

N e w Technology Development Funding totaling $9.2 billion has been requested for research and engineering in FY 1989. This figure is slightly lower than FY 1988. Details for recent years are shown in Exhibit 5.

Budget pressures have forced the Navy to cut back on proposed research and development spending in FY 1989. A year ago, the Navy planned to budget slightly more than $10 billion for this activity in FY 1989. The figure has been cut 8 percent to $9.2 billion. This is still double the spending level of 10 years ago.

This program is intended to identify and develop revolutionary submarine hull and nonnuclear propulsion technologies. DARPA's responsibility will continue over the next three to five years—with total funding exceeding $800 million anticipated for the work.

The Committee also assigned responsibility to DARPA to begin development of an advanced torpedo.

Additional funding of $10 million is recommended for FY 1989 to begin this program.

Another responsibility assigned to DARPA is the antisubmarine warfare initiative. This is to be a major integrated technology effort to "come to grips" with the Soviet submarine menace. Additional funding of $40 million has been recommended to begin this program.

Twelve years ago, IMA was asked by the Navy to perform a major study of its procedures for managing naval ship procurement. This was followed by an assessment of procedures used to manage the naval ship modernization program. Since then IMA has performed consulting assignments for over 100 commercial clients in 20 countries—establishing a leading international position in marine and naval market research.

In 1981, IMA began publishing a series of special reports on naval business opportunities. These reports now reach over 400 subscribers.

This article draws from several recent r e p o r t s and provides an indication of the type of coverage provided to subscribers. 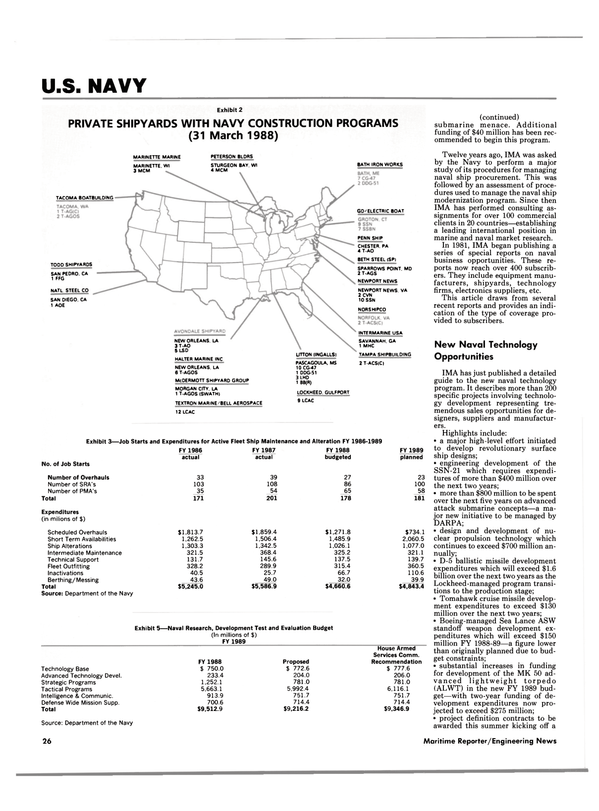