Skuld, the International Protection and Indemnity and FD & D Insurance Association based in Scandinavia, recently underwent major changes in its structure.

Changes include reorganization of the board of directors into a smaller, more dynamic unit supported by a committee of shipowners representing a cross section of the members, the adoption of totally revised statutes and rules, the election of a new chairman, and the appointment of a new managing director.

The new statutes outline the structure of the mutual club, which is subject to the requirements of the members who give voice to their wishes by voting at the general meeting that elects the board of directors, who in turn are empowered to appoint the managing direc- tor and the other directors of the club (the mangers). Unlike most other clubs, Skuld executives are employed directly by the board of directors and not through a management company.

The members at a general meeting also elect the committee which supervises the affairs of the association and ensures that its purpose is promoted. The new chairman is Guttorm Fossen, shipowner of the Oslo Company of Halfdan Dit- lev-Simonsen & Co. Management A/S, who takes over as chairman from Erik F. Lorentzen, who is retiring after having served as chairman for the past seven years.

The committee is comprised of 21 shipowners and two members from charterer's interests. It is chaired by Erik Behn of A/S Dampskibsselskabet Torm, Copenhagen. The other members are from Scandinavia, Germany, Greece, Holland, Hong Kong, Italy, Singapore, Switzerland and the U.S.

At the first board meeting under the new rules this year, the board of directors appointed Havar Poulsson to succeed managing director Nicolay Kieding, who retired after 44 years of service to the association, the last seven as managing director. The change took place on June 1, 1988.

Mr. Poulsson, a lawyer, started with the Skuld club as a claims adjuster in 1971. He has traveled extensively throughout the world for the association for many years and was appointed vice-managing director more than two years ago.

For additional information and free literature on Skuld, Circle 54 on Reader Service Card 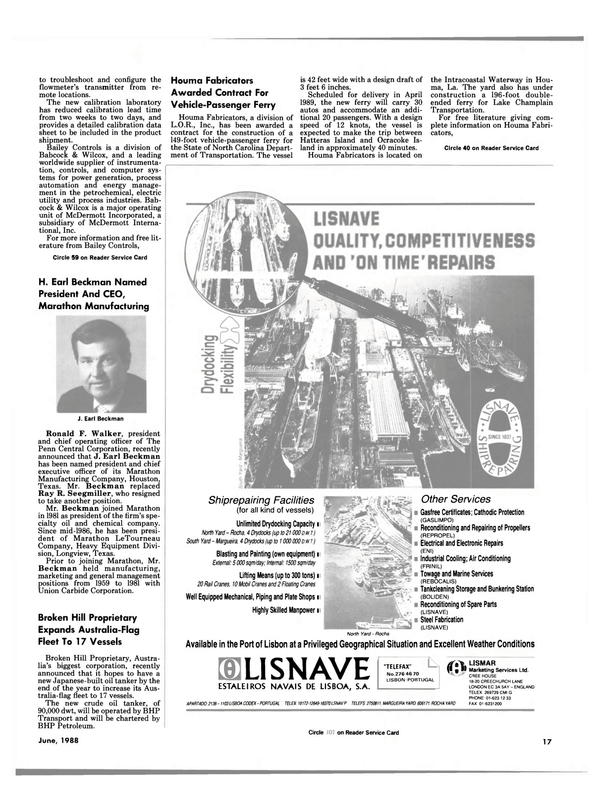