Named Exclusive Distributor Of EMD Engines In 10-State Area, Mexico And Central America Stewart & Stevenson Services, Inc., Houston, Texas, recently announced that the firm has been appointed the exclusive distributor for General Motors Electro-Motive Diesel (EMD) engines in a 10-state area, as well as Mexico and Central America. In a second announcement, the company also outlined plans for a major expansion of its marine and oil industry engine sales and service operation in southern Louisiana.

According to C. James Stewart II, chairman of the board of Stewart & Stevenson, the company has been appointed the exclusive distributor for General Motors Electro-Motive Diesel (EMD) engines in a 10-state area along the western Gulf of Mexico and in the Rocky Mountain area as well as throughout Mexico and Central America. Mr. Stewart also referred to the company's long association with General Motors Diesel engines and noted Stewart & Stevenson's extensive experience in building equipment powered by EMD engines and as a specialist in complete EMD engine repair and overhaul.

"This distributorship opens a whole new era in our capabilities and services for both domestic and international customers," said Mr.

The territory includes the states and coastal waters of Texas, Louisiana, Mississippi and Alabama, and encompasses a large portion of the Mississippi River. Other states in the d i s t r i b u t o r s h i p include: Colorado, New Mexico, Kansas, Oklahoma, Arkansas and Tennessee, as well as all of Mexico and Central America.

In addition to the distribution, Stewart & Stevenson will continue to supply and service EMD-powered systems for both land and offshore drilling rigs, generator sets for prime and standby power applications as well as ship service, and for propulsion of supply boats and tug boats.

Mr. Stewart also announced that the firm opened new operations on the Harvey Canal site in southern Louisiana, which would expand its marine and oil industry engine sales and service. The site was formerly occupied by George Engine.

Stewart & Stevenson will acquire certain assets of the operation from the Detroit Diesel Corporation.

The company will be the authorized sales and service representative for Detroit Diesel engines and products of the Allison transmission and Electro-Motive Diesel (EMD) divisions of General Motors.

Primary industries to be served by the new center will be oceangoing vessels, fishing and workboats and both inland and offshore drilling and production operations.

Ralston Cole has been named branch manager at the Harvey facility.

David Whisenhunt will be the eastern region manager responsible for the Harvey location as well as the firm's Houston and Beaumont branch operations.

Langham. Mr. O'Neal was also appointed to the board of directors of Stewart & Stevenson.

Mr. O'Neal, who has been with Stewart & Stevenson for over 23 years, has extensive knowledge of the company and its products. Prior to his appointment as president, he was vice president in charge of the company's Engineered Power Systems Division with responsibility for manufacturing and sales of diesel and turbine-powered products. 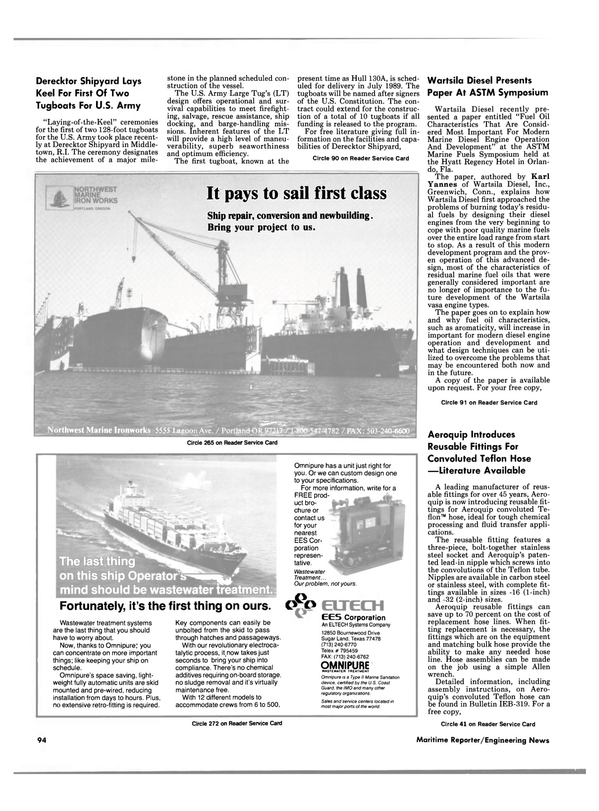