SHIPBUILDING AND REPAIR IN U.S. SHIPYARDS

These days, any privately owned shipyard that was formerly occupied strictly with building new merchant ships has either swung around to the repair and conversion market, has made plans to do so, or is actively pursuing Navy work—which certainly continues to be more than substantial.

The Navy is spending $34 billion annually for ships, weapons, support equipment and maintenance, all to the benefit of both the yards and marine equipment manufacturers.

There are no large, oceangoing merchant ships under construction or on order in any U.S. shipyard.

However, plans at present call for two new containerships for the Hawaiian trade to be ordered from a U.S. yard by Matson Navigation Co.

The vessels would enter service in the 1990s.

For the most part, six large U.S.

yards are almost totally occupied by Navy ship construction. Some dozen smaller yards are busy with smaller surface vessels for the Navy, MSC, Army and Coast Guard. Several yards have built military vessels for foreign navies and negotiations are now underway for more such contracts.

Tacoma Boatbuilding Co., for example, recently announced that it had signed a $116-million contract with the Egyptian Navy to retrofit four Romeo Class submarines.

Last November, when Bay Shipbuilding delivered the third of a series of three containerships to Sea-Land—and the last large merchant ship to be built in the U.S.—it marked the first time in the country's history that no commercial ships were under construction.

As of June 1987, six merchant ships totaling 80,680 deadweight tons were under construction or on order in three U.S. yards. Besides the three containerships for Sea- Land, which were all delivered during the year, McDermott's New Orleans yard delivered a hopper dredge, the Atlantic American, and Tacoma Boatbuilding was building two incinerator ships. The order for the two incinerator ships was cancelled when the yard filed for Chapter 11 protection.

It has been noted that the Department of Defense relies on the private sector shipyards to provide it with essential support capabilities.

Apparently, now, the private sector is not able to provide these capabilities, according to the SCA.

Cruise Market Work On The Rise Location is a prime factor in cruise ship repairs and regular maintenance and drydocking programs.

Such jobs, involving the large oceangoing cruise vessels, have been on the increase in the middle and South Atlantic coasts and the central and North Pacific coasts.

In a U.K. report on the World Cruise Market 1987-88 from MRC Hawkedon Publications, it is noted that the U.S. West Coast (Mexico and Alaska) will continue to increase the number of berths offered because the cruise market is constantly growing and these are the least expensive, and usually most convenient areas for first-time cruisers to visit. All this means more ships amd more maintenance and repair work for U.S. yards.

In FY 1987, the U.S. shipbuilding and ship repair industry invested more than $150 million in modernization of its facilities. As of July 1987, the industry planned to spend an additional $70 million during the first half of this year. Most of these improvements will increase and modernize the repair sector.

Tampa Shipyards currently holds a $43.2-million contract for the conversion of the USNS Diamond State (T-ACS-7) and the USNS Equality State (T-ACS-8). A total of 12 auxiliary crane ships is planned.

Aloha Pacific Cruises' 34-year-old passenger ship Monterey underwent extensive refurbishing work at Northwest Marine Iron Works and Tacoma Boatbuilding. Conversion of the 563-foot vessel into a luxury cruise liner is being completed at Warstila-Helsinki in Finland. She will be delivered in time for her "remaiden" voyage from Copenhagen on July 31.

Bath Iron Works, the lead yard for the Navy's Arleigh Burke Class destroyer (DDG-51) and a builder of CG-47 Class cruisers, reportedly is the choice of Taiwan to build a fleet of new frigates for her navy.

Pennsylvania Shipbuilding, Chester, Pa., is currently building four fleet oilers for the Navy. It ended 1987 with a $420-million backlog.

Bethlehem Steel Corporation announced in January of this year that it was divesting itself of its yards in Beaumont and Port Arthur, Texas and its Singapore facility, and consolidating its shipbuilding operations at Sparrows Point, Md. David H. Klinges, president, marine construction for Bethlehem, said "(the move) will make us more competitive and will enable us to respond to the needs of the reduced marketplace more effectively." The new division will market and produce offshore drilling platforms, naval and commercial ships and other marine products and provide a full range of vessel repair and modification services.

At present, the Bethlehem-Sparrows Point yard is building two oceanographic survey ships for the Navy.

In addition, the company also recently leased a 44,000-ton-capacity floating drydock to supplement its 1,200-foot-long graving dock. The drydock has been successful in attracting repair business, and has been fully booked since its inauguration.

Newport News Shipbuilding, the country's largest shipyard, is currently building two Nimitz Class aircraft carriers, the USS Abraham Lincoln (CVN-72) and the USS George Washington (CVN-73), and has received a first advanced contract to start work on two additional carriers. The yard also has a number of attack submarines under construction for the Navy.

Norshipco is one of the busiest yards on the East Coast in both the naval and commercial repair and conversion sectors.

Smaller repair yards abound in the area, such as Colonna's Shipyard, Metro Machine and Moon Engineering, who are all involved in Navy repair work.

In Florida, the Jacksonville Shipyard is involved with both commercial and naval repair and maintenance work.

The Ingalls Shipbuilding Division of Litton Industries is currently constructing or has on order 10 Ticonderoga Class cruisers, one Arleigh Burke Class destroyer and three amphibious assault ships for the Navy. In addition, the yard is also modernizing the battleship Wisconsin, and has a number of Navy repair contracts.

Navy. The company's Lockport facility has just begun the construction of a 110-foot harbor tug for Chevron USA.

Equitable Shipyards is building an 85-foot ferry for use in the Virgin Islands, a 50-foot pilot boat for Jordan and finishing a 122-foot crewboat and a 101-foot crewboat.

Gretna Machine & Iron Works is building a 470-foot coal barge and is busy with ship repair, conversions and barge cleaning.

According to John Dane III, president of the Trinity Marine Group, his company has bid over $100 million in projects in the last three months and the group now employs about 1,000 people.

Avondale Shipyards of New Orleans, while busy with the construction of Navy fleet oilers and landing dock ships, is also hoping to become a third source for the Navy's Arleigh Burke Class destroyer. Early this year, the shipyard also received contracts to build offshore structures for four operators—Apache, Chevron, Pennzoil and Shell.

McDermott Inc., New Orleans, La., delivered the hopper dredge American Atlantic and announced at the end of last year that they had received a $100-million contract to build to drilling platforms for the Morecambe field.

In Texas, Houston Ship Repair was busy with a number of Navy and MarAd repair contracts.

On the West Coast, the National Steel and Shipbuilding Company (NASSCO) of San Diego is building a fast combat support ships (AOE) and is working on a number of Navy repair contracts.

In Portland, Ore., the Portland Ship Repair Yard (PSRY) reported it had an excellent year in 1987, recording the highest facility utilization in the history of the complex.

The facility's repair companies include Northwest Marine Iron Works, West State, Inc. and Cascade General. Some 12 cruise ships have visited the yard over the last two years for major overhauls. The liners Constitution, Rotterdam and Noordam are already scheduled for stops at the yard.

PSRY is searching for another contractor to join the present three—a firm with a solid base in shipbuilding.

Tacoma Boatbuilding will be finishing the construction of the USNS Audacious (T-AGOS-11) and the USNS Bold (T-AGOS-12) next year.

MARCO Seattle has been busy with the construction of a number of smaller craft. Its Campbell Shipyard in San Diego is building two new tuna seiner models.

Nichols Brothers Boat Builders of Whidbey Island, Wash., delivered a 156-foot excursion boat for Alaska Riverways of Fairbanks. Along with Gladding-Hearn Shipbuilding, Somerset, Mass., Nichols Brothers are the exclusive U.S.-licensed builders of International Catamarans- designed vessels. Last summer, Gladding-Hearn delivered one of these type vessels, the Mackinac Express, to Arnold Transport Company of the Great Lakes. It is the first catamaran to operate on the Great Lakes.

In Alaska, the new Ketchikan yard has a built-in business. The state has mandated that all repair and services performed on Alaskan State ferries be done within the state.

After delivering the last merchant ship on order in the a U.S. shipyard, Bay Shipbuilding, Sturgeon Bay, Wis., annoouced that it would downsize its operation to support ship repair and conversion work only.

Marinette Marine and Peterson Builders Inc., both located in Wisconsin, are busy constructing mine countermeasure vessels for the Navy. 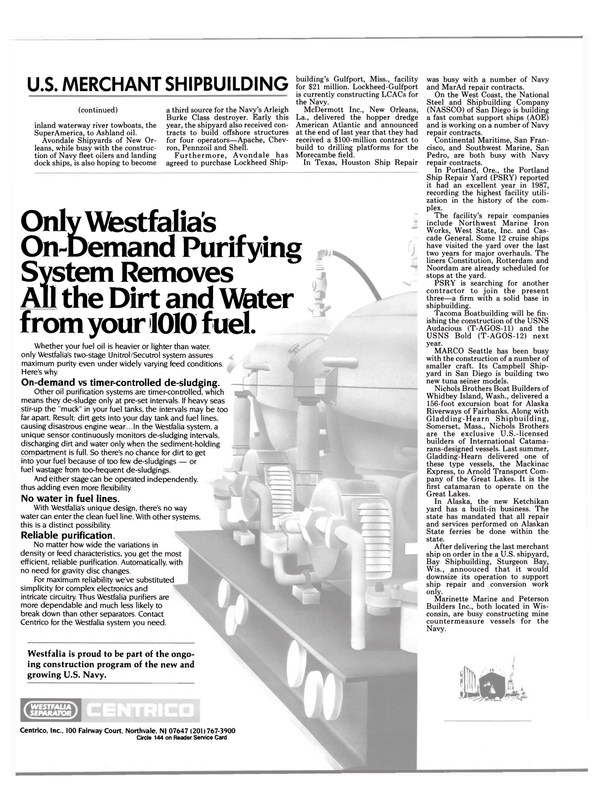