The tug and barge industry plays a major role in the local economy, but unless you live or work along the banks of the nation's waterways, you might not realize what's happening when all those huge lumbering barges float by the shoreline, loaded with who-knows-what, bound for who-knows-where.

On a national scale the U.S. waterways industry carries more than 13 percent of all the nation's total goods, on rivers, canals, and intracoastal waterways of America, aboard thousands of gigantic silent barges of all shapes, sizes, and functions.

This is a nationwide fleet of 7,500 coastal tugboats, inland river towboats, and over 32,000 huge barges of all dimensions, which ply the waters of the Atlantic, Pacific, the Gulf Coasts, and work on rivers all over the country—the Mississippi, the Ohio, the Columbia, the Hudson, the Missouri, the Tennessee, and others. It is an industry which pulls and pushes vast quantities of material on over 125,000 domestic voyages each year, to and from over 200 U.S. inland and coastal ports.

Strangely, although huge in size, scope, reach, equipment and employment, the nation's tugboat and barge towing industry is little known for either its overall contribution to the American economy, or for the main factor that enables that contribution to be so significant—- the remarkable efficiency of these waterborne giants.

A towboat (which actually pushes) and its string of cargo-laden barges are not what one would usually think of as inflation fighters.

But they are. The key is cost. One of the great contributors to the escalating prices of basic consumer goods like food and energy is the factor of "Operating costs," and a big portion of those costs is transportation.

Since keeping transportation cost down is important to keeping consumer costs down, the call is for efficiency—the ability to move large quantities of material at low overhead cost in a competitive marketplace. And that's what we do.

In fact, such a description seems to define the tugboat and barge towing industry exactly.

The statistics on the barge industry's capacity are astonishing, at least. In fact, according to the American Waterways Operators (the barge industry's trade association), a single barge can transport the harvest of over 1,500 acres of farmland, or enough gasoline to drive your car over 9 million miles, or enough coal to light and heat your home for 700 years!

Transportation of materials on the inland and coastal waterways of the United States is geared to flexible, low-cost delivery of gigantic quantities of the essential raw materials, fuels, building materials, and other main components of American life. Last year, over 558 million tons of raw materials like grain, soybeans, and other agricultural products, petroleum, lumber, chemicals, steel, and coal traveled by barge along the inland and intracoastal waterways of the nation. Essentials like housing prices and electricity rates are directly affected by the cost of transporting the materials that comprise and power them, and a firm case can be mde that it is the tug and barge industry's efficiency that helps hold down the price for consumers.

This remarkable efficiency—this ability to move tremendous quantities of essential materials effectively and inexpensively—is the key that saves consumers money on everything from gasoline to home heating oil, from orange juice to electricity.

Such efficiency can be seen in the following example: on the lower Mississippi River, a single powerful towboat often pushes as many as 40 barges at one time. To move the same amount of material by railroad, it would require 600 rail cars.

Or, to move the same amount of material by truck would require more than 2,200 semi-trucks. This kind of transportation cost efficiency has a direct cost-benefit effect on the price of the most basic materials of American life.

There is another major factor in the cost-to-consumer equation: competition. The water carriers provide hefty competition to the United States' railroads for the movement of many important bulk freight materials, and the water carriers help hold down prices consumers pay because of the transportation alternative they provide. Many things that can be moved by rail, can also be moved by water, and the two forms of transportation vie in a healthy—but fiercely competitive— marketplace.

So the next time you see a string of barges moving quietly along a river or the coast, think about what it is doing for you. If it's carrying fertilizer, it is moving by the most inexpensive transport available, which means America's farmers can grow food cheaper. If it's carrying coal, no other form of transport brings fuel to utilities as cheaply and efficiently as barge transport—which means your electricity bill may not climb as steeply, and which means more discretionary buying power for you. 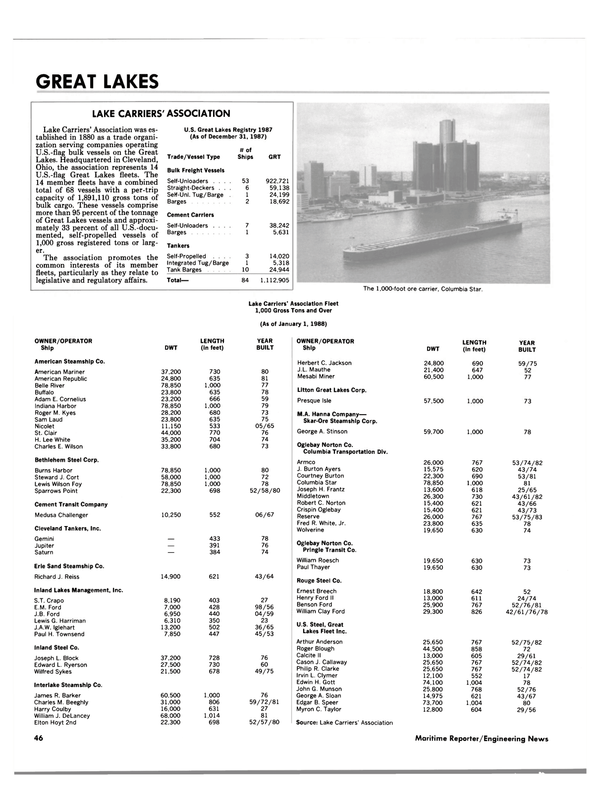 Read The Tug And Barge Industry Provides A Wealth Of Benefits To American Consumers in Pdf, Flash or Html5 edition of June 1988 Maritime Reporter