—Free Literature O f f e r e d— Gladding-Hearn Shipbuilding, Somerset, Mass., has received an order from TNT Hydrolines, Inc., Wayne, N.J., for an 80-foot, 265- passenger, high-speed passenger ferry, which will be used for commuting and excursions in New York Harbor. The announcement was made by George Duclos, president, Gladding-Hearn Shipbuilding, and John R. Arwood, chairman, TNT Hydrolines, Inc., at a news conference aboard the Gladding- Hearn-built Island Express, which was docked at Pier 11 in lower Manhattan.

The boat, reportedly the first purpose-built vessel to be used for commuting in the area, will carry passengers to and from Monmouth County, N.J., and New York City.

During midday hours, the vessel will be used for tourist excursions. She will be able to carry 220 passengers inside her cabin and a total of 265 when her outdoor seating is utilized.

The vessel will be designed by Philip Hercus of International Catamarans Pty Ltd. (INCAT), Sydney, Australia. Gladding-Hearrn Shipbuilding and Nicholas Brothers Boat Builders, Freeland, Wash., are the only two yards in the U.S.

Only eight shipyards are licensed worldwide to build these special passenger boats. The highspeed ferry will be powered by two Deutz-MWM 12-cylinder diesel engines which will give her a 31-knot capability. Her twin-hull design gives her a near wakeless operation with excellent stability in all kinds of weather.

The as-yet-unnamed vessel will have luxurious accommodations, heat and air conditioning, and a snack bar on the main deck. She will be similar to the Island Express, another INCAT-designed highspeed catamaran, which was demonstrated for the press in New York Harbor at the news conference.

At present, there are more than 100 Hercus catamarans either ordered or operating worldwide. The TNT Hydrolines vessel is the first catamaran ordered for use in New York Harbor. 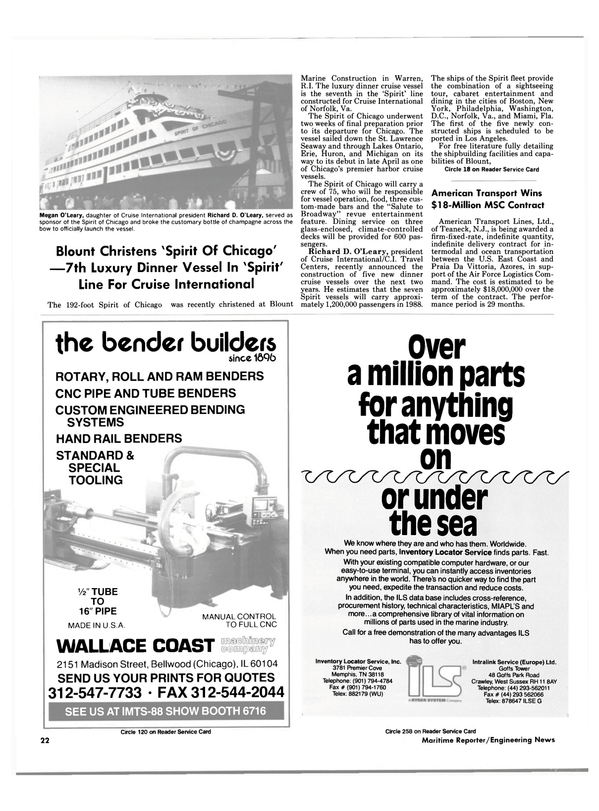