Although 1987 was by no means a banner year for our shipbuilding, ship repairing and allied industries, it did have some positive aspects that portend well for the future. The Order Book total, i.e. vessels under construction and on order, at the end of 1987 was 63,820 GT, a 58% increase over 1986. While this tonnage is still far lower than the years before 1986, it is encouraging to note that 32,220 GT or just over half, stemmed from commercial contracts. It is certainly hoped that is indicative of future trends.

It is also encouraging that the number of foreign built vessels registered in Canada decreased slightly, from 9 to 7, although, in terms of gross tonnage, this represents a significant increase. Situations of this sort support the CMIA contention that, as Canada needs and wants a viable shipbuilding and repairing infrastructure, a national policy must be developed, to this end.

Such a policy should, we suggest, provide the capability for innovative financing arrangements to evolve, which would persuade Canadian fleet operators to build and refit in Canada. More about this later.

The value of allied industries marine revenue was down slightly from 1986, but the implications of the June, 1987 White Paper on Defence should reverse this trend during 1988.

During 1987, Marine Industries Limited acquired Versatile Vickers (Montreal), Versatile Davie (Lauzon) and Versatile Systems Engineering Inc. The MIL Group then consolidated the three shipyards along the St. Lawrence River, with respect to operations. This action undoubtedly warmed the cockles of the hearts of those members of the Federal bureaucracy intent on monitoring the rationalization of the Canadian shipyard infrastructure. At the time of writing, early May '88, it is understood that Government officials are involved in discussions on the West Coast but no results have yet been announced.

At the end of December, 1987 shipyard employment stood at 5,649, the lowest level in CMIA records. However reports have been received of significant hirings since the beginnings of '88.

During the first quarter of 1988, several new contracts were awarded, with a virtual 50-50 balance between new construction and refit/ repair.

The outlook through '88 into the next decade appears promising, for several reasons. First, world shipping increased steadily over the past 20 months, with several ports, including some in Canada, reporting record operations, either in certain categories of cargo, or in total. Secondly, Canadian fisheries are placing more orders in Canadian yards, not as many as we'd like, perhaps, but enough to provide work for several medium yards. Finally, offshore drilling continues at low levels in the Beaufort, off the Newfoundland coast and in the Sable Island area.

Planning is well advanced against the day when phasing into the production stages becomes economically viable, and this major move could be made in the near future.

Government contracting with respect to the Canadian Coast Guard and Fisheries & Oceans' fleets continues, with both new construction and major refit and repair contracts being expected this year. It is pending naval contracts, however, that are capturing media attention in all parts of the country. The third and fourth Tribal-Class modernizations have yet to be announced, and the industry anxiously awaits the Government's next move on the acquisition of a mine counter-measures fleet and other minor war vessels.

The nuclear-propelled submarine project, however, has gained the limelight. The "battle" between Britain and France to win the impending country-of-origin decision has progressed to the final rounds, and it is believed that this decision is imminent. In total, the prospects for shipbuilding and ship repairing in Canada, together with those for the allied manufacturing and service industries, hold promise for a modest recovery from the slump of the past few years.

Finally, the question of a national shipbuilding and repairing policy for Canada has advanced to a new stage. Working with Government officials, the CMIA has developed a framework for a national policy, which has now been submitted to the Prime Minister with a formal request that such a policy be formulated.

To use the somewhat trite expressions received from Government on this issue two years ago, the monkey is off the Association's back, and the ball is in the Government's court. 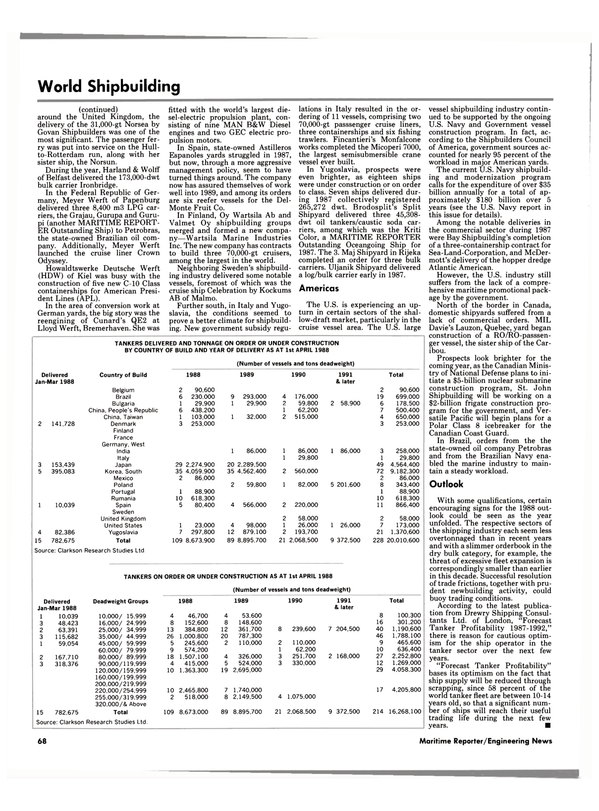