Construction Of First Of Two 70,000-GRT Cruise Ships Under Way At Fincantieri-Monfalcone Yard

The construction of two 70,000- grt cruise ships ordered by Astramar of Genoa, which will be among the largest in the world upon completion, is well under way at the Monfalcone yard of Fincantieri Cantieri Navali Italiani.

The first of these two diesel-electrically powered ships is to be delivered to Astramar in the spring of 1990, with the second to follow in 1991. Each 1,950-passenger liner, with a service speed of 19.5-knots, will feature extensive passenger facilities including lounges, night clubs, disco, casino, shopping arcades, cafeteria, conference room/ cinema, swimming pools and other amenities. About 80 percent of the 792 passenger cabins will have outer balconies. There will also be 355 cabins for the crew of 700.

Designed for worldwide cruising, the vessels will be powered by a highly advanced diesel-electric plant. There will be four 6.6KV, 60- Hz main alternators driven through a flexible coupling by a MAN B&W eight-cylinder, in-line L58/64 fourstroke, medium-speed engine, with a maximum continuous rating of 9,720 kw at 400 rpms. These alternators will supply power through transformers to the two 12,000-kw, three-phase synchronous-type pro- pulsion motors, each directly driving a fixed-pitch propeller via shafting.

In addition to supplying 6,600/ 450 volt, 60 Hz electrical power to the propulsion motors, this same power is fed to the motor-driven thrusters and air conditioning compressors, while other motors are generally powered by 440 volts, 60 HZ AC. Other electrical equipment is served by 440/220/115 and 24 volt DC circuits.

Among the reasons given by Fin- cantieri for the selection of the economical diesel-electric power plant is the availability of the new generation of medium-speed diesel engines able to burn low-grade, low-cost fuel oil and resilient mountings for the engines. Another key factor stressed by Fincantieri was the availability of large thyristor converters to operate large synchronous propulsion motors at variable speeds as required to drive fixed-pitch propellers and improve the maneuverability of the ship by faster response of the electric propulsion motors.

The four-engine configuration gives sufficient flexibility in matching the generating capacity with the actual load under all operating conditions with acceptable load factors.

To save weight and headroom, the engines are directly mounted on the ship's structure by resilient rubber elements. 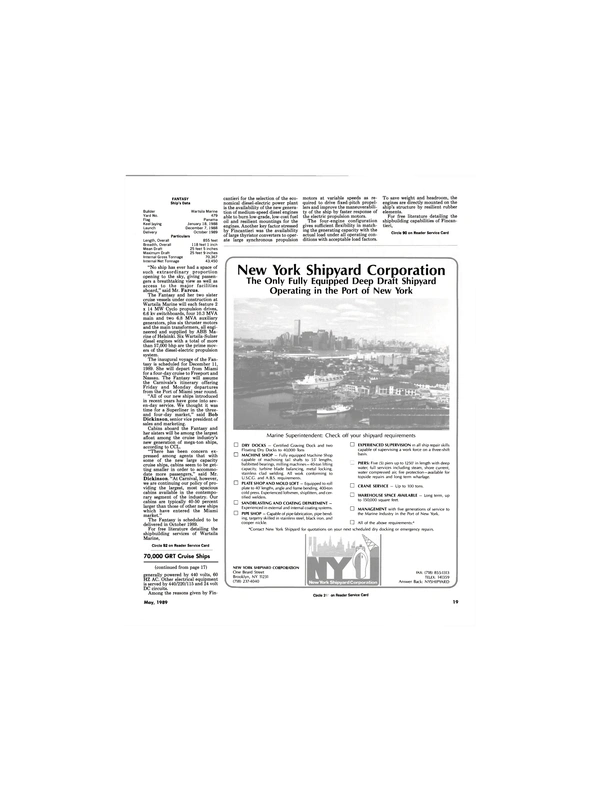 Read Construction Of First Of Two 70,000-GRT Cruise Ships Under Way At Fincantieri-Monfalcone Yard in Pdf, Flash or Html5 edition of May 1989 Maritime Reporter