"In Norfolk, our research indicates the desire of local residents for more spacious accommodations, table seating for four, and contemporary facilities," said Mr. O'Leary at a recent press conference. "Our new ship will more than meet these desires and will feature an extremely modern entertainment and restaurant design. The Spirit of Norfolk II will comfortably seat almost 500 passengers versus the 350 passengers accommodated on the inside decks of our former dinner cruise ship, the New Spirit." The Spirit of Norfolk II is based on a concept by Mr. O'Leary, and is similar to an Italian yacht design.

Service Marine designers evolved his concepts into the ultramodern megayacht Spirit of Norfolk II. The cruise boat has a boldly shaped bow, sleek hull lines and a swept-back superstructure, capped by a pilothouse with the latest electronic communication and navigation equipment.

"The shape of the bow is both dramatic and functional," said Tom Hensley, president of Service Marine.

"It gives a distinctive design element to the vessel, but also serves as an open deck area for panoramic sightseeing during day cruises and stargazing on dinner cruises." The interior of the three-deck vessel was designed by Mrs.

O'Leary in shades of gray and burgundy, accented by brass, mirrors, and a variety of textures.

Mechanically, the Spirit of Norfolk is as modern as her design.

She is powered by a pair of Caterpillar 3408 DITA Series B 430 diesel engines with Twin Disc MG-516 gears and can cruise at speeds of about 10 knots. "The vessel handled very well on sea trials," said Mr.

Hensley. "In military craft terms, the boat has the responsiveness of a destroyer, yet cruises with the stability of a battleship." Part of the vessel's outstanding maneuverability is due to a 150-hp hydraulic bowthruster powered by a PTO from the starboard genset.

A three-station hydraulic orbitrol system is used for steering. Electric, non-follow-up control levers are located at wing stations placed at either end of the pilothouse. The third station is in the center of the wheelhouse above a 32-inch destroyer- type wheel. Hydraulics for the steering and bowthruster were supplied by Skipper Hydraulic, Harvey, La.

Other important systems onboard the Spirit of Norfolk include 60 tons of Carrier air conditioning, installed by Harris Refrigeration, and electric over mechanical engine controls, supplied by MMC of Seattle.

Service Marine also has a second vessel under construction at its Morgan City yard for Cruise International.

Cruise International has become one of the largest operators of dinner cruise ships in the country, grossing over $25 million annually.

In 1989, nine Spirit ships, located in eight different cities will employ over 1,200 people nationally, and will entertain nearly 1.3 million passengers. 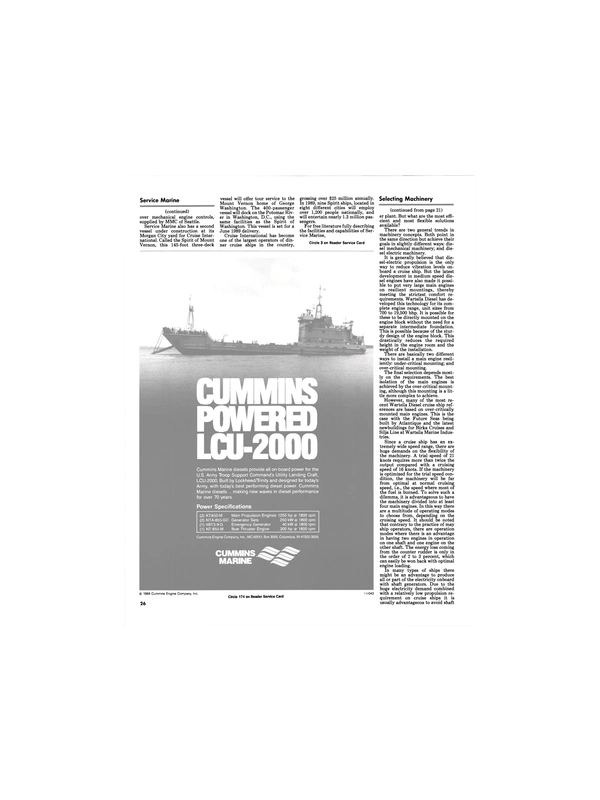