Oslo, Norway, June 13-16 Nor-Shipping '89, an international shipping and maritime offshore exhibition and conference, will be held at the Sjolyst Exhibition Center in Oslo, Norway, from June 13- 16, 1989. So far, 300 firms have registered at 150 stands for participation in the biennial Nor-Shipping 89. There is renewed enthusiasm in the shipping world, particularly in Norway, as, over the last two years, Norwegian shipowners have been involved in 50 percent of all buying and selling of ships internationally.

Nor-Shipping, which is being held for the 12th time, has regularly attracted 8,000 shipowners, brokers, manufacturers and many other specialists in the marine and offshore field. Nor-Shipping 87 attracted 650 manufacturing companies from 25 different countries. At the exhibition, specialists from over 40 countries took the opportunity to make contacts and do business, underlining the international stature of the event.

At Nor-Shipping 89 there will be national pavilions representing such nations as Japan, South Korea, Spain, France, the Netherlands, the Federal Republic of Germany, the German Democratic Republic, Poland, Yugoslavia, Denmark, Finland and Norway. Several others are expected to hire stands from now until the exhibition opens, although the formal application deadline has expired.

The organizer of Nor-Shipping 89 is the Norwegian Trade Fair Foundation, and major Norwegian and international organizations.

H.M. King Olav V recently inaugurated the Sjolyst Exhibition Center's new exhibition halls and parking facility. The center is now able to offer a total display area of more than 25,000 m2 spread over seven halls, and around 2,000 indoor and outdoor parking places. During Nor-Shipping 89, the radar, electronics and computer section will be in the new Hall G.

There are also major land-based maritime activities, and this industry considerably increased its supplies in 1988, exporting goods and services for NOK 8 billion.

All in all, the situation in the shipping industry in Norway has undergone major and very positive changes since Nor-Shipping 87. The prospects for the future have not been so bright for decades, and exhibitors and visitors to Nor-Shipping 89 will be able to take advantage of that.

The theme of this year's biennial conference is the future challenges facing Norway's maritime community.

During 1988, Norway's shipping and offshore industry employed 72,000 individuals and had a gross turnover of $6.9 billion. Its shipping companies own or operate 1,500 vessels totaling 51 million dwt—of which, over two-thirds are engaged in international trade.

Last year, Norwegian owners purchased $2.3 billion worth of new and second-hand ships, and currently have 55 newbuilding orders at shipyards in 10 different countries.

The conference is structured as a series of five half-day sessions, examining the business, technical and operational challenges. Under the chairmanship of Jens Ulltveit- Moe, vice president of the Norwegian Shipowners Association, leading speakers will discuss "The Business Challenge" in Sessions 1 and 2.

Dr. Tor-Chr. Mathiesen, director of Det norske Veritas, will chair the first two sessions exploring "The Technical and Operational Challenge"; with the final session chaired by Julian Parker, secretary of the Nautical Institute.

Fees for "The Challenge of Change" conference are UK£70 plus VAT, NK986, or $145 per session, which includes attendance, documentation and light refreshments.

Lunch is included for those attending a full day's program.

"1992—An Opportunity or an Omen for Norway's Shipping Community?" by a senior spokesman from the European Commission, Brussels.

Session 2 (Afternoon) THE BUSINESS CHALLENGE "Newbuildings for Norwegian Owners— How many Ships of which Type will Norwegian Owners Need in the 1990s?" speaker to be announced.

"Who will Build Them?" speaker to be announced.

"Where will the Money Come From?" by Boris Nachamkin. managing director, Bankers Trust Company, Ltd., London.

"Safety and the Ageing World Fleet" "The Insurers' Perspective," by a senior spokeman from the American Institute of Marine Underwriters, New York.

"The Charterers Perspective," speaker to be announced. 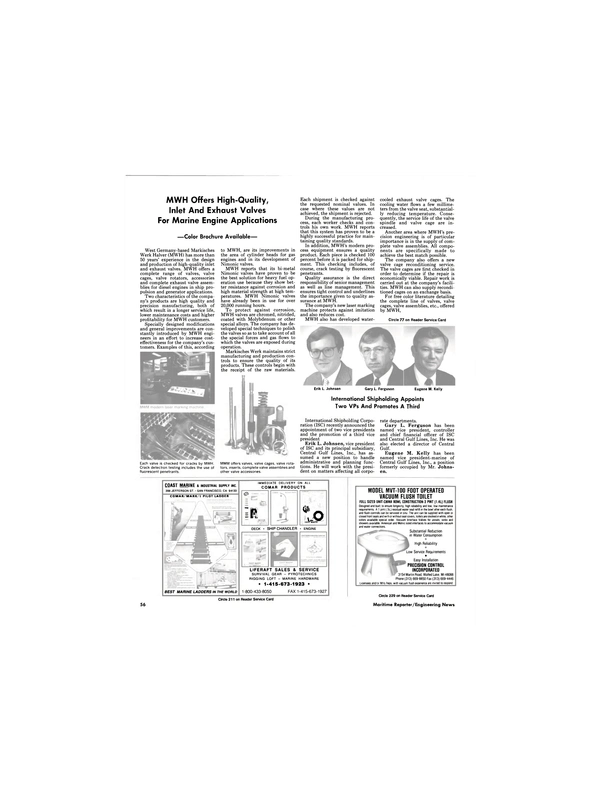 Read NOR-SHIPPING '89 Exhibition And Conference in Pdf, Flash or Html5 edition of May 1989 Maritime Reporter