The new boats, the Atco Marwa and Atco Daina, are now working for the Arabian American Oil Company (ARAMCO) out of Ras Tanura, Saudi Arabia.

A prominent feature of both boats is a large 55- by 17-foot aft deck which can carry up to 25 tons of cargo.

While Trinity boats of this type usually carry 55 passengers, these vessels were designed to carry 25 riding on aircraft-type reclining seats.

The new boats are each 101 feet 8 inches long, with a 21-foot 8-inch beam and a 9-foot 6-inch molded depth. Normal operating draft is 5 feet. Each is powered by three Stewart & Stevenson-Detroit Diesel 12V71TI engines developing 510 bhp each at 2,100 rpm. They turn through Twin Disc MG514 reverse/ reduction gears with a ratio of 2.0:1.

Each of the air-conditioned crew boats has accommodations for up to six crew in three staterooms. They can carry 3,400 gallons (U.S.) of fuel, 1,000 gallons of potable water, and over 4,600 gallons of ballast water. Both are also fitted with a reverse osmosis 300 gallon per day water maker.

Classed by the American Bureau of Shipping, the new boats were preceded by an identical sister vessel, the Atco Hebah. Halter Marine Inc.

also designed and built two other 101-foot crew boats for Marine and Transportation Services. They are the Matts Salwa, built in 1983, and the Matts Leila, delivered in 1984.

Both new boats were build by Halter Marine Inc. personnel at Equitable Shipyards, Inc. in New Orleans, La. Both companies are part of the Trinity Marine Group.

For free literature containing full information on the facilities and capabilities of Trinity Marine Group, Circle 22 on Reader Service Card 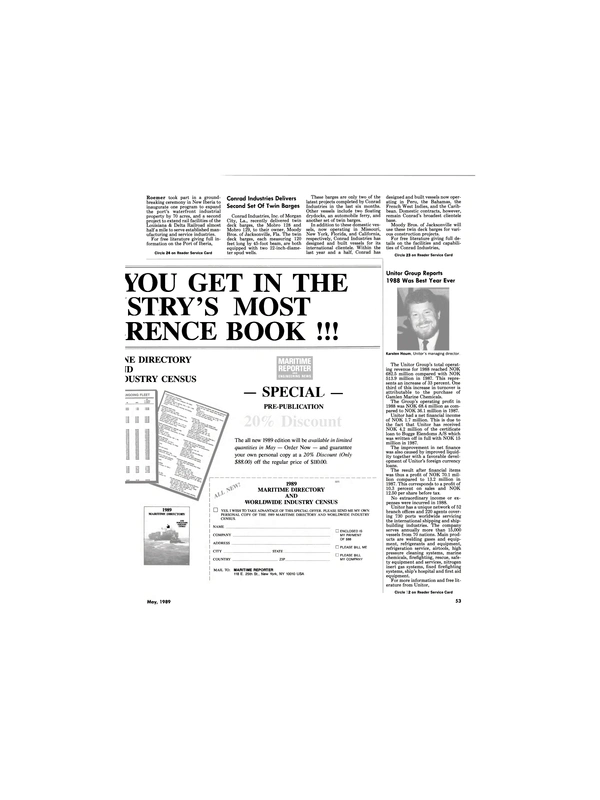