Joe Pallotta, president of Bay State Cruises, said the vessel makes the 100-mile trip between Boston and Nantucket in three hours. Top speed for the vessel with a full load of passengers is 32 knots. The Nantucket Spray leaves the World Trade Center in Boston at 8 a.m., skirts Cape Cod, and arrives in Nantucket at 11 a.m. She leaves Nantucket for the return trip at 4:30 p.m.

Bay State will operate on this route from May until October, accommodating 360 passengers in airline- type seating. The fully heated and air-conditioned vessel will offer full galley and bar service.

The Nantucket Spray is what the designer, International Catamarans (INCAT), calls a "wave piercer." The advanced technology vessel has been described as a cross between a catamaran and a hydrofoil.

INCAT developed the prototype of the wave piercer in 1983 in Australia.

Five of these vessels, which have proven to be superior performers in the open ocean, are now in service in Australia. The Nantucket Spray, however, is the first of the type to be built in the U.S.

Unlike a traditional catamaran, in which the passenger cabin is mounted directly to two hulls, the wave piercer suspends the superstructure on angled struts attached to widely spaced, long narrow hulls.

The angled struts place the hulls outboard of the superstructure; extreme beam of the Nantucket Spray is 51.2 feet.

Bay State Cruises also operate the Vinyard Spray catamaran that runs between Boston and Martha's Vinyard from May until October.

The Vinyard Spray was built by Bay State last year by Gladding-Hearn Shipyard of Massachusetts.

Other vessels under construction by Nichols Bros, include six catamaran ferries for Puerto Rico.

For free literature giving complete information on the facilities and capabilities of Nichols Bros. 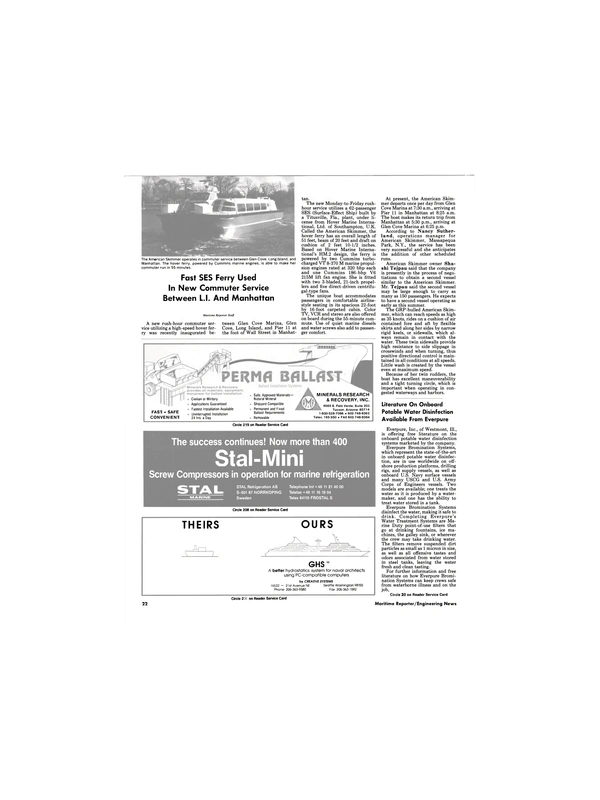