AN UPDATE ON U.S. NAVY SHIP AND EQUIPMENT PROCUREMENT

The U.S. Navy continues to be the major driver of business for shipyards and marine equipment suppliers in the United States. A status report for shipbuilding programs and a summary of the FY 1990/91 Navy ship procurement budget is provide below.

Cost growth—The Navy now estimates that 22 of 38 current fixed-price-incentive contracts will exceed contract target costs by a total of $3.2 billion. This is substantially greater than the $2 billion cost growth figure estimated last year for these 22 contracts. The Navy expects to absorb approximately $1.4 billion of the cost growth. This leaves $1.8 billion presumably to be absorbed by the industry.

SSN-21 (Seawolf Class attack submarine)—The construction contract for the lead ship was awarded to GD-Electric Boat in January 1989. A program of 30 ships is planned. Newport News and GDElectric Boat will compete for future work.

SSN 688 (Los Angeles Class attack submarine)—A total of 63 SSN-688 Class submarines have been ordered by the Navy. GDElectric Boat has received 34 of these awards. Newport News has been awarded 29 SSN-688s. Forty units have been delivered. The remaining units will be delivered by the mid-1990s. The two awards last December could mark the end of the program—though at this time two additional ships are included in the FY 1990 budget to complete the program.

CG 47 (Ticonderoga Class cruiser)—The last of the 27 ship Aegis cruisers were funded in FY 1988. Thirteen have been delivered and the remaining 14 are in various stages of construction at Ingalls and Bath Iron Works. The last ship of this class is scheduled for delivery in 1994.

Ingalls has received awards for three ships. The lead ship is scheduled for delivery in 1991.

LHD-1 (Wasp Class amphibious assault ship)—Litton has been awarded contracts for four ships in this class. The USS Wasp (LHD-1) was delivered in March 1989. LHDs 2, 3 and 4 are scheduled for delivery in April 1992, January 1993, and March 1994, respectively.

Additional ships in this class are to be competitively procured in three ship lots starting FY 1992.

LCAC—Fifteen air cushion landing craft were awarded last December to Textron Marine Systems and Avondale Gulf Marine. These awards bring the number of craft under contract to TMS to 36 units.

Twelve units are under contract to Avondale. A project is underway to perform detailed design of Arctic configured LCACs.

MCM—Eleven mine countermeasure ships have been funded.

Peterson Builders has received contracts for eight units. Three units have been awarded to Marinette Marine. Three units remain to be funded to complete the program objective.

MHC—Contracts for two coastal minehunters have been awarded to Intermarine USA. Open competition for the third ship will be conducted to select a second source builder. Intermarine and the second source will compete for the remain- ing 14 ships in the 17-ship program.

AOE-6—Contracts for two combat support ships have been awarded to NASSCO. The first ship is scheduled for delivery in July 1991. NASSCO has fixed price options for two additional ships.

TAO-187 (Henry J. Kaiser Class fleet oiler)—Avondale has scooped up all but two of the ships in this 18-ship program. The remaining two fleet oilers have been awarded to Penn Ship. No further orders are planned.

T-AGOS—Contracts for eighteen monohull ocean surveillance ships have been awarded. Tacoma Boatbuilding has been awarded contracts for 12 units. Halter Marine has received awards for six ships.

McDermott Shipbuilding has received contracts for four twin hull (SWATH) versions of the ocean surveillance ship. Delivery of the first SWATH ship is scheduled for February 1990. A new SWATH design (T-AGOS-23) is in the contract design stage with ship construction award planned in FY 1990.

T-AGS—Four ocean survey ships are under construction. TAGSs 39 and 40 are being built by Bethlehem Steel-Sparrows Point, with delivery of both ships scheduled this year. In November 1988, Halter Marine was awarded a contract to build two T-AGSs.

A O - 1 7 7 Jumboization— Avondale has been awarded a contract to add a 108-foot midbody to each of five AO-177 Class fleet oil- ers. In December 1988, the Navy negotiated a contract modification with Avondale which provides ammunition capability as well as increased oil capacity in the midbody.

PROPOSED SHIP PROCUREMENT BUDGET FOR FY 1990/91 For FY 1990, $10.4 billion has been requested to fund construction of 20 new ships and perform two major conversions. In FY 1991, $9.8 billion was requested to build 14 ships—including two follow ships in the SSN-21 attack submarine program.

Shown in Exhibit 2 is the breakdown of the shipbuilding budget request for the FY 1988-91 period.

A major change in the future program has been the deletion of three SSN-688 submarines originally planned for FY 1991 and 1992.

There had been criticism of the Navy's plan to overlap construction of the SSN-21 and SSN-688. The current plan is to end the SSN-688 program in FY 1990—and order two SSN-21s in FY 1991, maintaining a construction rate of three SSN-21s per vear thereafter.

The Navy plans to build DDG-51 Aegis destroyers at the rate of five per year over the next five years.

However, due to budget pressures, this program is a target for stretchout.

The Congressional Budget Office has estimated that buying three DDG-51s per year versus five per year would produce cumulative savings of $7.3 billion over the next five years.

The firm serves business clients in the U.S. and overseas, providing custom research reports tailored to specific management requirements. Since 1974, IMA has completed more than 120 projects for firms or public organizations in 20 countries. 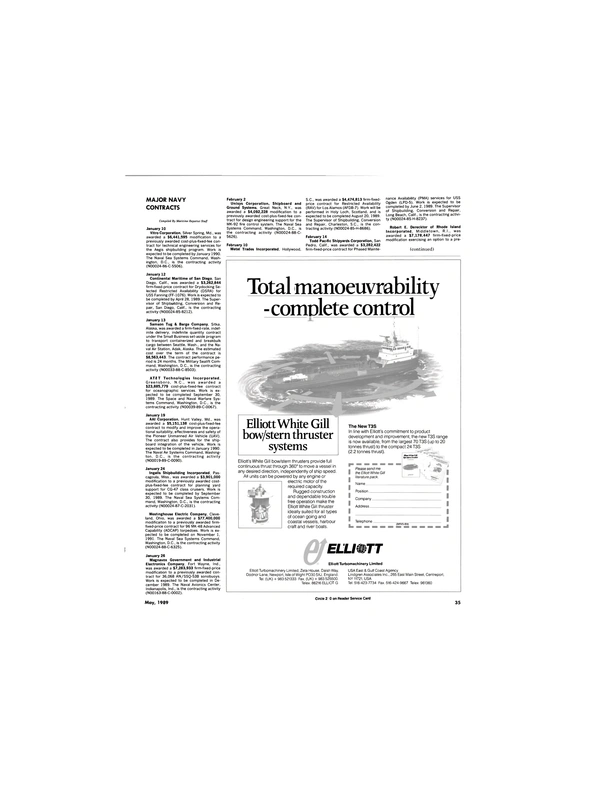 Read AN UPDATE ON U.S. NAVY SHIP AND EQUIPMENT PROCUREMENT in Pdf, Flash or Html5 edition of May 1989 Maritime Reporter