The Unitor Group's total operating revenue for 1988 reached NOK 682.5 million compared with NOK 513.9 million in 1987. This represents an increase of 33 percent. One third of this increase in turnover is attributable to the purchase of Gamlen Marine Chemicals.

Unitor had a net financial income of NOK 1.7 million. This is due to the fact that Unitor has received NOK 4.2 million of the certificate loan to Bugge Eiendoms A/S which was written off in full with NOK 15 million in 1987.

The improvement in net finance was also caused by improved liquidity together with a favorable development of Unitor's foreign currency loans.

The result after financial items was thus a profit of NOK 70.1 million compared to 13.2 million in 1987. This corresponds to a profit of 10.3 percent on sales and NOK 12.50 per share before tax.

No extraordinary income or expenses were incurred in 1988.

For more information and free literature from Unitor, Circle 220 on Reader Service Card 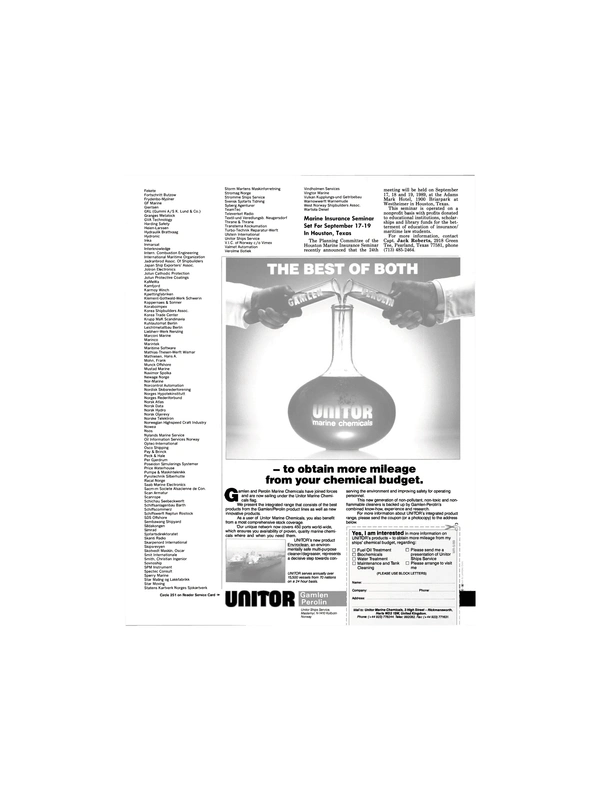 Read Unitor Group Reports 1988 Was Best Year Ever in Pdf, Flash or Html5 edition of May 1989 Maritime Reporter