Extensive modifications were required to convert a supply vessel to a submersible support ship up to HBOI's standards. Rodney E. Lay & Associates, designer of HBOI's Seward Johnson, was selected to design and engineer the conversion. A 168-foot Houma Fabricators hull was selected and work began at North American.

Labs totaling more than 1,600 square feet were added to the main deck. These include a wet lab with a fume hood room, a dry lab, two refrigerated environmental rooms, a video-film lab with dark room, a mechanical/electrical shop and a diver's support air compressor room.

A crew's lounge was also added on the main deck. On the 01 deck, 1,250 square feet of quarters were added to bring the total complement to 30.

Below deck, two former freshwater tanks were converted to an auxiliary machinery room and submersible stores. The ballast tanks were also modified by removing the internal mud tanks to provide scientific stores directly beneath the dry lab.

A marine sanitation device was also added. A mud compressor and diesel engine were removed to make room for a new 190-kw generator. A new switchboard was installed to parallel the new generator and two existing 75-kw generators. The existing tunnel thruster was removed and a 360-degree steerable thruster was installed for increased maneuverability while tracking the Johnson- Sealink submersibles. A Caley Hydraulics A-Frame rated at 18 tons was installed at HBOI to support the Johnson-Sealink II submersible that will be carried on board.

Additional scientific equipment installed includes a gallows frame, various oceanographic winches, uncontaminated saltwater pumps, and an internal moon pool for submersible communications. These will assist scientists in various research projects. With this new vessel, Harbor Branch has expanded its ability to conduct research all over the world.

For free literature giving full information on the facilities and capabilities of North American Shipyard, Circle 18 on Reader Service Card 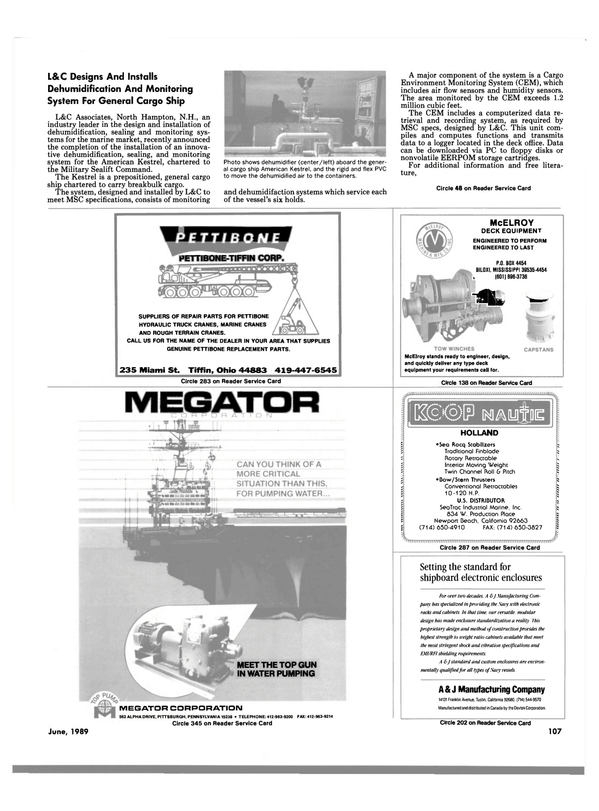