The Koopnautic Company of Holland, with its years of experience in stabilization and side thrusters, has engineered a new method of roll-damping.

The fin-blade is traditionally used in roll damping, providing excellent leverage. The units, which are similar in appearance to rudders, are typically mounted amidships and just inboard of the chine.

This equipment works well at moderate speeds but can have distinct disadvantages at either low or high speeds.

According to SeaTrac Industrial Marine, a U.S. distributor for Koopnautic roll-damping equipment, because fin-blade methods of rolldamping are less effective at extremely low speeds and may cause a detremental drag factor at high speeds, fin-blades are best-suited for a moderate-speed, long-range vessel.

For vessels requiring a greater range in roll-damping performance, from slow fishing or maneuvering speeds to high-speed cruising, Koopnautic offers the new retract- ing Rotary system, which utilizes the "Magnus Effect." Some of the advantages of the system, according to the firm, include superior performance at both very low speeds and high speeds, and retractability, which protects the equipment from possible damage and cuts drag at high speeds.

For more than 20 years, Koopnautic has been manufacturing rolldamping equipment for ships—not only increasing comfort on board but also contributing a great deal to ships' safety at sea.

The most well-known are the Sea- Rocq fin stabilizers and the MVS 2000 electrohydraulic moving weight system, the latter reportedly well-suited for vessels at slow speeds and at anchor. Additionally, the company also offers Trim-Plane, oversized and high-powered stern trim plate controlled by gyro and electrohydraulics. This method has been installed on vessels ranging from 10 to 300 tons displacement.

For a free brochure fully detailing the roll-damping products from Koopnautic, Circle 69 on Reader Service Card 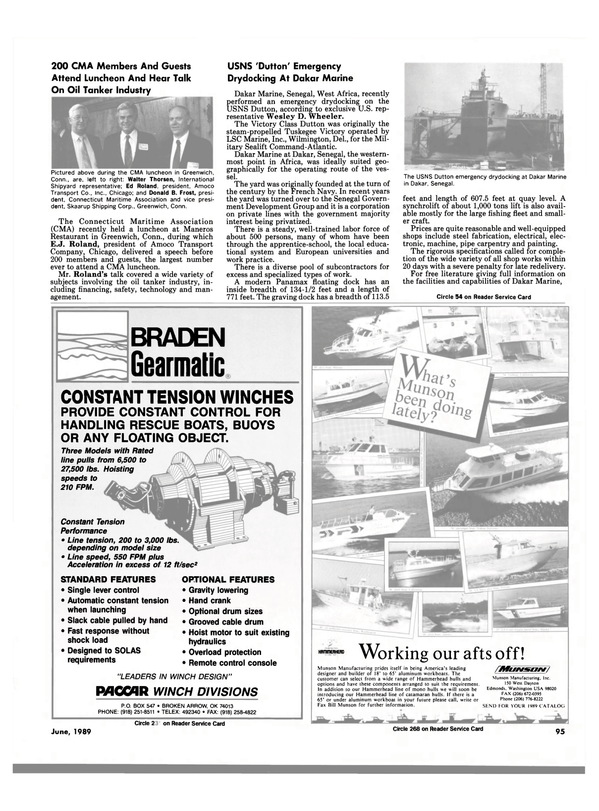