New Orders Up For Second Year In A Row According to Drewry Shipping Consultants Ltd., London, England, an aging world fleet (27 percent of the fleet is more than 15 years old), should provide the world's shipbuilding industries with a modest increase in work based primarily on replacement tonnage. The major market for builders in the early/ middle 1990s will be, according to Drewry, the construction of tankers and, in particular, VLCC tonnage.

Tonnage of this size is still the most economic way to move crude oil, and vessels in the 250,000-280,000-dwt range will increasingly be in demand as 1970s-built tonnage is scrapped.

Drewry predicts aggregate newbuilding demand in the period up to 1997 will be 330 million dwt (200 million grt), with tankers accounting for nearly 40 percent of total output. Of this figure, VLCC demand is estimated to be over 70 million dwt, i.e. nearly 300 vessels.

This optimistic view seems to be backed by a recent report entitled "Outlook for the World Shipping Market 1988-2000," published by the City University Business School of London. The report predicts that shipbuilding output in deadweight tons will nearly double in the next five years. The forecast is based on continued world demand for bulk freight, higher average dry cargo time charter rates, and scrapping of more tankers and dry cargo vessels as they become older and world metal prices rise. The report points out that by 1993, more than 55 percent of the tanker fleet will be at least 15 years old, as compared to 18 percent of the world's bulk carrier fleet.

A report published by the Association of Western European Shipbuilders (AWES) also maintains an optimistic outlook. The AWES report forecasts an upward trend in tonnage demand during the next decade as seaborne trade and the world economy continue to grow.

According to the report, by the year 2000, world fleet requirements for gross tonnage will be more than double that of mid-1987. Demand for new ships will occur as laid up and surplus tonnage shrinks and as aging and obsolete vessels are scrapped.

The AWES report predicts that 85 percent of overall newbuilding requirements in deadweight tons will be for oil tankers and bulk carriers.

An extensive report issued by U.K.-based Ocean Shipping Consultants entitled "World Shipbuilding & Newbuilding Prices to 2000," also projects an increase in new tonnage demand for the last decade of this century. Although owners will require only about 38.5-million grt in newbuildings between 1991 and 1995, this demand should rise dramatically, according to the report, to over 132-million grt between 1996 to 2000.

Because of the increase in demand for new tonnage, the report forecasts that the cost of newbuildings will also rise substantially, with prices for certain types of vessels doubling (See Table 1).

total tonnage completed to 10.9 million gross tons. This represents a drop of 1.4 million gt from 1987 figures.

Furthermore, for the second year in succession, new orders exceeded completions, indicating an improved outlook for the world shipbuilding industry. Orders placed in 1988 totaled 12.3 million gt, an increase of 1.4 million gt over the total output. The tonnage ordered in 1987 amounted to 13.8 million gt, 1.5 million gt more than the completions during the same period.

Number two shipbuilder South Korea increased its total output from 2.1 million gt in 1987 to 3.2 million gt, a jump of over 52 percent.

South Korea's share of the world tonnage output increased from 17.1 percent to 29.1 percent.

The largest ship completed in 1988 was the 305,893-dwt ore/oil carrier Alster Ore, built in Taiwan by China Shipbuilding Corp. for Krupp Seeschiffahrt.

During the last quarter of 1988, eight ships of over 200,000 dwt were completed, seven of which were delivered by South Korean shipyards.

Far East Japan regained the leading position in the world orderbook with its 5.96 million gt, overtaking South Korea (5.87 million gt) which had held the lead since the third quarter of 1987. Sixty-one percent of the tonnage in Japan's orderbook was under construction, compared with 39 percent of South Korea's.

The Kobe shipyard of Japan's Mitsubishi Heavy Industries recently received an order to build a 164-passenger cruise ship. The order was placed by Frontier Cruises, a new joint venture of Salen Linblad Cruising, Nippon Yusen Kaisha, Mitsubishi Corp., Hapag-Lloyd and MHI. The ship is expected to be delivered in November 1990.

Nedlloyd has already received a proposal for the first five ships from a consortium formed by NKK Corporation and Kawasaki Heavy Industries.

Among the orders were four containerships for West German owners, a 4,300-cubic-meter-capacity LPG carrier for Kosan Tankers of Copenhagen, a RO/RO cargo vessel for Ahlers Lines of Antwerp, five bulkers for Hyundai Merchant Marine (two of 37,000-dwt, two of 200,000 dwt and one of 150,000 dwt), two bulk carriers for Hanjin Container Lines and a bulker for Korea Line Corporation.

Samsung Shipbuilding received a boost when West German shipping company Hapag-Lloyd placed an order for five containerships worth about $347 million. The newbuildings will each have a capacity of 4,400 TEUs and are scheduled for delivery into 1992.

At present, FELS is completing a $60-million cantilever rig for Santa Fe.

One of the latest export orders won by China State Shipbuilding Corporation (CSSC) of the People's Republic of China calls for the construction of two 300-TEU feederships for Neptune Orient Lines of Singapore. The 361-foot vessels will be built at the Qiuxin Shipyard.

Europe In Europe, a consortium of yards is also bidding for the Nedlloyd order. Alsthom Chantiers de l'Atlantique of France, West Germany's HDW and Bremer Vulkan, and Van der Giessen de Noord of the Netherlands have formed a consortium in hopes of winning the first batch of orders due to be placed next month.

Portugal's Estalieros Navais de Lisboa (LISNAVE) posted a record-breaking year in the shiprepair sector. With improved productivity and a trimmed workforce, LISNAVE recorded a sales turnover of more than $100 million in ship repair.

Across the border in Spain, stateowned A s t i l l e r o s Espanoles S.A. (AESA) posted an excellent 1988, almost doubling the amount of newbuilding tonnage it acquired in 1987. Boosted by a number of tanker, refrigerated cargo vessel and gas carrier contracts, AESA won orders for 60 vessels totaling 611,914 tons. In 1987, the shipbuilding group won contracts for 19 vessels with an aggregate tonnage of 307,256 tons. One of the latest contracts won by AESA is for two 140,000-dwt Suezmax crude carriers for Seatankers Management.

In the first four months of 1989, West German shipowners increased their orders for new ships, citing an improved shipping outlook and the creation of a second German ship register.

According to the German Shipowners Association, its members ordered 22 vessels totaling 530,500 grt from January to mid-April. The tonnage figure exceeded all German ship orders in 1987 and 1988.

One of the beneficiaries of the increased orders is the West German shipyard Schichau Seebeckwerft.

Besides being busy with a number of conversions, the yard has an impressive list of new construction. Among its newbuildings, Schichau Seebeckwerft launched the 35,000-grt jumbo-ferry Olau Hollandia, reportedly the largest vessel of her type operating from Germany. The 528-foot ferry has a passenger capacity of about 1,600, and is expected to be delivered this September. Her sister, the Olau Brittania, is under construction at Schichau Seebeckwerft and is expected to be delivered next year.

In January, Schichau Seebeckwerft also delivered the all-around combicarrier Robin Hood to TTLine of Hamburg. The sister vessel of the Nils Dacke delivered last year by Schichau, the Robin Hood has an overall length of 581 feet and deadweight tonnage of 8,800.

L i n d e n a u GmbH, S c h i f f - swerft & Maschinenfabrik of Kiel received an order for a 3,500- dwt clean oil tanker from Ethiopian Shipping Lines, Addis Ababa, Ethiopia. Scheduled to be delivered in October 1989, the product/oil tanker will be equipped with 12 loading tanks. Her cargo tank capacity will be about 4,000 m3.

Wartsila Marine Industries, Inc. is nearing the completion of the first of three 70,000-grt cruise ships for Carnival Cruise Lines. The 2,600-passenger Fantasy is expected to be delivered in October of this year. Wartsila's Turku Shipyard expects to deliver the 855-foot Fantasy's sister ships, the Ecstasy and Sensation in 1990 and 1991, respectively.

The construction is being performed under a $600-million pact.

The deal could be worth $136.6 million to B&W if options for two additional bulk carriers are exercised.

According to the Swedish Shipbuilders Association, Swedish merchant shipbuilding has reached its lowest production and orderbook figures since WWII.

In 1988, Swedish yards completed eight ships of 16,612 grt, not including naval vessels. As of the end of 1988, Sweden's orderbook stood at 11 ships totaling 11,721 tons, including the icebreaker Oden, since delivered to the government by Gotaverken Arendal.

Alsthom's Chantiers de l'Atlantique of St. Nazaire, France, is busy constructing the sister ship of the huge 74,000-grt Sovereign of the Seas. The yard expects to deliver the cruise ship in April 1991.

I t a l i an yards experienced a healthy influx of orders in 1988.

F i n c a n t i e r i ' s M o n t e f a l c o ne Shipyard has begun the construction of the first of two 70,000-grt cruise ships for Astramar. The huge luxury liner, which is expected to be delivered in the spring of next year, will have a passenger capacity of 1,950.

3. Maj is also constructing a 6,000- grt, 362-foot luxury cruise ship for Salen Lindblad/Atlas. The 821-passenger vessel is scheduled for delivery this year.

One of the latest contracts won by Uljanik, Pula, Yugoslavia, is for the construction of two 40,000-dwt tankers for undisclosed owners.

Brodosplit is also preparing to deliver the sister vessel of the Baltic super ferry Amorella to SF Line of Mariehamn.

Americas The ongoing U.S. Navy and government vessel construction program remains the main impetus in the U.S. During 1988, the Navy contracted for 32 ships, which increased the backlog in U.S. yards to $16.6 billion. This was a substantial increase over 1987, which showed a backlog of $9 billion.

One of the bright spots in the U.S.

for new vessel construction continues to be in the shallow-draft vessel market, particularly in the cruise boat sector.

However, no new commercial shipbuilding orders were placed in 1988. U.S.-flag operator Hvide Shipping has requested bids from 14 U.S. shipyards for the major reconstruction work of a 41,000-dwt chemical tanker. While Matson Navigation has requested bids from Avondale Industries, Bethlehem Steel-Sparrows Point and National Steel & Shipbuilding Co. for the construction of a 1,600- TFEU combination containership.

The contracts have yet to be awarded for these two projects.

But the fact remains that without a comprehensive maritime promotional package from the government, the U.S. shipbuilding industry will be unable to take advantage of any international increase in demand for new tonnage.

The Canadian shipbuilding industry industry was rendered a severe blow when the government cancelled its plans to build 10-12 nuclear submarines.

As in the case of the U.S., government contracts accounted for most of the tonnage on order, with the remainder comprised of such commercial vessels as fishing boats, tugs, barges, etc. A bright spot was in the repair and conversion sector, where the value of work increased from to $188 million to $214 million.

In Brazil, Verolme do Brasil was awarded a $135-million order to build four 68,000-dwt self-unloading bulk carriers. The award increased the value of the yard's orderbook to over $480 million. Two of the ships were for the CSL Group Inc. of Montreal and two for VULICA Shipping Inc. of the Bahamas. 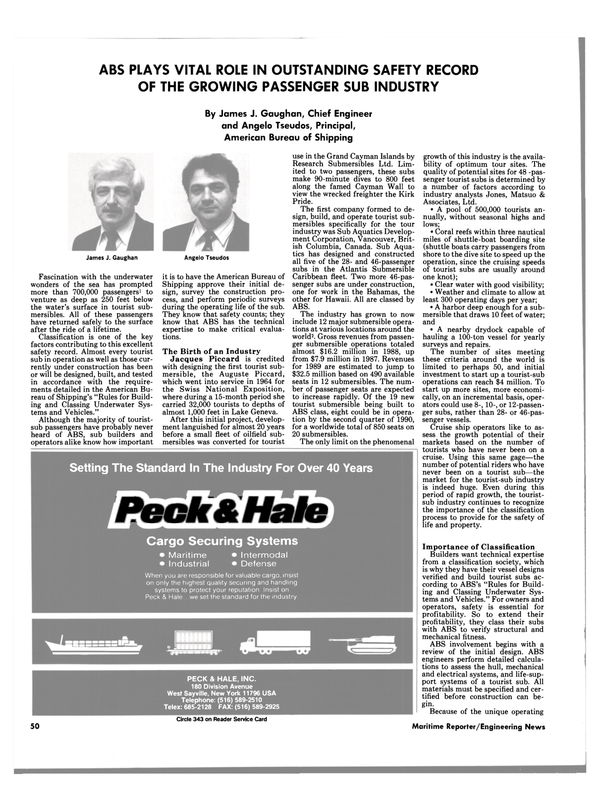