NBC anchorman Tom Brokaw and South Dakota Governor George S. Michelson were among a number of South Dakota dignitaries who participated recently in the christening and launch of the USS Rushmore at Avondale Industries in New Orleans, La.

The Rushmore is the fourth in a series of Landing Ship Dock (LSD) vessels being built for the U.S. Navy by Avondale's Shipyards Division.

It is scheduled for delivery in early August.

Mr. Brokaw, a native of South Dakota, was principal speaker at the christening; his wife, Meredith A.

Brokaw, was the ship's sponsor.

Governor Mickelson also delivered remarks at the ceremony and his wife, Linda Michelson, served as matron of honor.

The LCACs which will be carried by the Rushmore also are being built by Avondale at its recently acquired Gulfport marine facility.

The LSDs are multi-functional ships capable of a wide range of amphibious assault operations for the Navy and the U.S. Marine Corps. Their primary mission is to carry, launch and dock up to four Landing Craft Air-Cushion (LCAC) vessels. In combination with the LCACs, the LSD ships permit landing of troops through beach obstacles and heavy surf to potential trouble spots around the world.

The ship christened and launched at Avondale is the second to bear the name Rushmore. The original Rushmore was launched in May 1944, and participated in four amphibious landings, earning three battle stars during World War II.

The Rushmore and other Navy ships under construction at Avondale are built using state-of-the-art modular construction techniques for prefabricated units. The large modular units are assembled and outfitted with piping, ventilation ducts, electrical wireways, and other equipment, in designated zones of the shipyard. The pre-outfitted modules are then moved to the building site and erected into complete ships. Prepackaged units of heavy machinery are assembled ashore and then lifted aboard ship for installation.

Avondale, headquartered in metro New Orleans, is one of the nation's leading marine fabricators.

Its Shipyards Division was founded in 1937. In addition to its shipbuilding operations, the company specializes in boat and landing craft (LCAC) construction. It is also a major marine repair contractor, serving both military and commercial customers in addition to engaging in modular construction for many land-based industrial applications, such as electrical power plants.

For free literature containing full information on the facilities and capabilities of Avondale Industries, Circle 11 on Reader Service Card 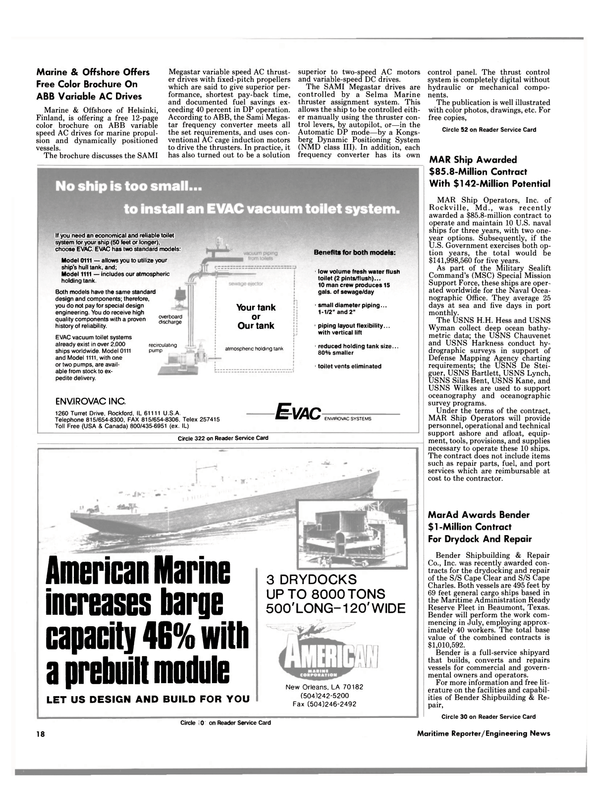