The bombshell provided by Canada's April 1989 budget completely overshadowed any definitive review of 1988, with respect to Canada's shipyards and associated marine manufacturing and supply industries.

I'll return to this dramatic issue after a quick look at the year ending on December 31, 1988.

Our 1988 Shipyard Order Book total, i.e., vessels under construction and on order, declined slightly from 89,309 GT to 85,037 GT, a drop of 4.8 percent. As expected, Government contracts accounted for a majority of this total, i.e., 62 percent, with the commercial component comprising fishing vessels, tugs, barges and component structures.

The value of new construction, however, more than doubled.

It should also be noted that the total value of repairs and conversions for 1988 grew from $180 million to $214 million, or by 19 percent, reflecting both a significant increase of commercial refits, particularly on the West Coast, and an increase in the refit value of Government vessels, including the Tribal Class destroyer modernization program, after the effect of a 4.2 percent inflation rate is discounted.

On a discouraging note, the number of foreign-built vessels registered in Canada rose from 7 in 1987 to 18 in 1988, an increase of 257 percent, although the actual gross tonnage increase was only 5.6 percent.

Nevertheless, this reflects the failure of the minimal, ineffective Government policies currently in place to protect our industry, the survival of which does not seem to be among Government priorities, in spite of encouraging rhetoric from the bureaucrats of the departments concerned.

Employment in our member shipyards increased by 39 percent during 1988, to an average annual figure of 7,848 from 5,649 a year earlier.

All told, 1988 tended to confirm our hopes and expectations that shipyards in Canada had "bottomed- out" from the 1985-86 slump and were now into a gradual recovery phase.

And now for the outlook—aye, there's the rub! On the commercial side, the last delivery of vessels currently under construction is scheduled for January 1990, and very little remains on the order book beyond that date. We believe that the larger fisheries are still planning accelerated fleet renovation programs, although recent reductions in some fish quotas have probably eased their urgency. Our problem is to attract any such orders into Canadian yards.

It is the Federal Government's segment of future new construction, however, that generates real gloom.

The 1989 Federal budget, tailored to gain control of the annual deficit, contained staggering news—the Government's project to acquire a fleet of 10-12 nuclear-powered submarines was cancelled. To add insult to injury, cutbacks and delays were announced for other capital acquisitions; and although details are sparse, the mine counter-measures fleet seems vulnerable to shrinkage or deferment. It is the loss of the submarine project, however, that has really hurt. This 27-year project, valued at $8 billion or more in 1987 dollars, represented over 50,000 person-years of work for shipyards and allied industries over its life, not to mention a huge spinoff to the economy at large.

While only one or two shipyards might have been involved in this project, large numbers of manufacturers, system integrators and suppliers were anticipating business opportunities from this project. Millions of dollars have already been spent for purposes of promotion and prepositioning, all now in vain.

Perhaps not as obvious is the qualitative loss to Canadian maritime industries. This project would have resulted in major transfers of new technologies to Canada, as well as causing significant upgrading of existing technologies, all of which would have had a most dramatic positive impact on Canada's industrial base into the next century.

If there is a glimmer of hope in the budget, it is the statement that (somehow or other) the Government will continue to support the 1987 White Paper on Defence, and will act immediately to identify alternatives to the submarine project, to provide Canada with an effective navy. This will undoubtedly prove difficult, given the defense budget cuts of $2.74 billion planned for the next four years.

On the broader issue of shipbuilding policy, the Association will continue to work for realistic incentives to Canadian owners to build in Canada; while pursuing, together with our American colleagues, the reduction of shipyard subsidization by the governments of foreign maritime nations. More than ever, the future of our shipyard industrial sector, far from being assured, must depend on new policies that lead to more commercial orders. 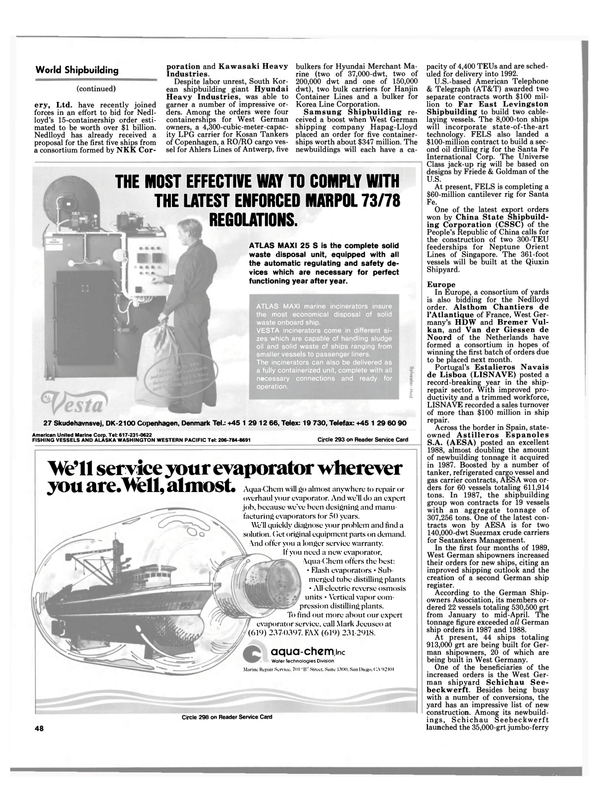