THE OUTLOOK FOR U.S. NAVY SHIPBUILDING AND SHIP REPAIR

Status of U.S. Navy Ship Modernization and Maintenance NAVY BUDGET The proposed Navy budget is $101.7 billion in FY 1990 and $105.1 billion in FY 1991. This would represent a three to four percent increase over current spending. Described below are Navy's plans and budget for major program activities over the next several years.

The amount of $9.8 billion is requested in FY 1991 to build 14 ships—including two follow ships in the SSN 21 attack submarine program.

Shown in Exhibit 1 is the breakdown of the shipbuilding budget request for the FY 1988-1991 period.

Exhibit 2 shows the projected program over the next five years.

A major change in the future program has been the deletion of three SSN 688 submarines originally planned for FY 1991 and 1992.

There had been criticism of Navy's plan to overlap construction of the SSN 21 and SSN 688. The current plan is now to end the SSN 688 program in FY 1990. In FY 1991 Navy plans to order two SSN 21's and maintain a construction rate of three per year thereafter.

Navy plans to build DDG 51 Aegis destroyers at the rate of five per year over the next five years. This program is a target for budget cutting— most likely by stretch-out— building fewer ships per year over a longer period.

Other changes from last year's plan include a change in timing for several programs—including the AOE fast combat support ship, LHD amphibious assault ship and TAGOS survelliance ship. Three MCM mine countermeasure ships have been added for FY 1990. (See MR, 3/89 issue page 25 for a full report on 'The Navy—A $35-Billion Annual Market') SHIP REPAIR U.S. Navy ship maintenance and modernization continues to be a ma- lion in FY 1990 and $5.7 billion in FY 1991 to maintain and modernize ships in the active forces. This compares with $5.0 billion this year and $4.5 billion in FY 1988. Details are shown in Exhibit 3.

Distorting the funding trend is a conventional carrier overhaul in FY 1990 and the complex overhaul of the nuclear carrier U.S.S. Enterprise (CVN-65) in FY 1991. These two overhauls consume a substantial portion of the ship maintenance budget—and the work is earmarked for performance in specific shipyards.

Naval Reserve Fleet Funding of $208 million is requested in each of the next two years for maintenance and moderni- zation of ships in the Navy reserve fleet. This compares with $199.0 million in FY 1989 and $157.0 million in FY 1988. Details are provided in Exhibit 5.

Deferred Maintenance Occurring The Navy is obviously deferring maintenance and modernization to stay within budget constraints. In its presentation to Congress, Navy indicates budget pressures will create a ship overhaul backlog of three ships in FY 1989, four ships in FY 1990 and five ships in FY 1991.

Long Term Implications The Navy is facing a serious prob- lem. As shown in Exhibit 7, the buying spree over the past ten years has resulted in a larger fleet. The active force has grown from 545 ships in 1985 to 568 ships this year. Growth in fleet size will continue over the next several years—despite plans to decommission 39 ships in FY 1990 and 1991.

These ships need to be maintained.

Yet the funds available for such maintenance are increasingly difficult to find. This dilemma probably cannot be resolved internally by Navy. There are too many special interest groups with which to contend.

Eventually the Congress, the GAO, perhaps the DOD Inspector General's office will examine what is taking place. There will be efforts to require Navy to perform more maintenance. Some modest increases in funding and shifts in pirorities may result. But don't expect major shifts until a catastrophe occurs.

Things To Look For Here's a short list of possible actions to look for over the next 12 to 24 months which affect ship maintenance: • cancellation of the Enterprise (CVN 65) refueling overhaul and decommissioning of the ship—despite the sunk cost already invested in this effort; • continued substitution of short term maintenance availablilities for overhauls (bad news for firms outside homeport areas); • accelerated retirement of Adams/ Farragut (DDG 2/37) class destroyers; • cuts in purchases of replacement and modernization components; • smaller work packages as planned alterations are cancelled due to funding constraints; • cuts in force structure—13 instead of 15 carrier groups (watch for hearings before the Senate Subcommittee on Projection Forces and Regional Defense); • reduced fleet operating tempo; • shift of ships from active to reserve status (eight ships already earmarked during FY 1990 and 1991); • privatization efforts to fund military construction needs. 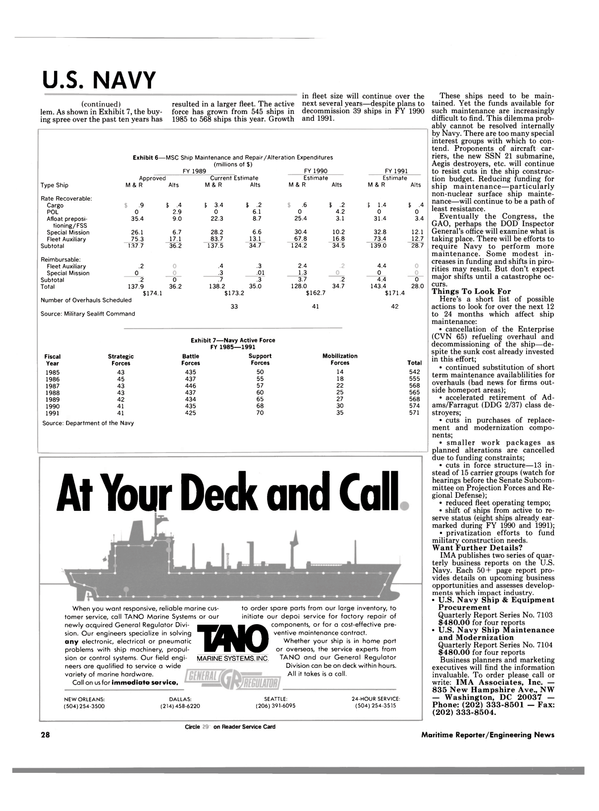 Read THE OUTLOOK FOR U.S. NAVY SHIPBUILDING AND SHIP REPAIR in Pdf, Flash or Html5 edition of June 1989 Maritime Reporter