According to ITT Decca Marine, Inc., the U.S. distributor for The Decca Radar Company of Great Britain, Clearscan uses advanced video enhancement techniques to automatically suppress virtually all the things that make it difficult for an operator to locate ships, buoys, land masses, etc.

For example, on the conventional radar screen, such things as rain, or even the tops of waves, can show as a solid mass which blots out images of ships in that vicinity. The operator can adjust his reception manually to eliminate such "rain and sea clutter" in that sector. But, in doing so, he may also eliminate important "targets" in that sector as well as targets in other sectors.

Clearscan works in every sector, automatically suppressing not only rain and sea clutter but also other types of interference as well—without losing the significant images the operator must see. At the same time, it brightens and enlarges these images so they are more easily seen and identified.

The result is a radar picture of unprecedented clarity, completeness, accuracy, and brilliance.

And the picture is maintained continuously, without any adjustment whatsoever by the operator.

Clearscan is being offered in two parts: the VP-1 and VP-2 (Video Processors 1 and 2).

The VP-1 printed circuit board, which is a direct replacement for the video board in existing solidstate units, provides automatic suppression of sea and rain clutter.

The VP-2, which will be available in early 1978, is an optional " b l a c k box" unit that may be used with Decca radar equipped with VP-1. The VP-2 circuitry suppresses interference from receiver noise and other ships' radars. It also brightens weak echoes and "stretches" small echoes on the 12, 24, and 48 (or 60) mile ranges for better viewing.

According to a Decca executive, sea trials of Clearscan have been going on for the last 18 months. He indicated that Clearscan has been successfully tested on a variety of vessels—an ocean ferry, containership, fishing boats —and in several different waters, including the North Sea and North Atlantic.

"The new Clearscan Radar has to be seen to be believed," says Alan Thompson, sales manager of ITT Decca Marine, the U.S.

"Clearly, it's a major advance in radar technology . . . certainly the most important in the last 10 years." For complete information on Clearscan Radar, write to Mr. 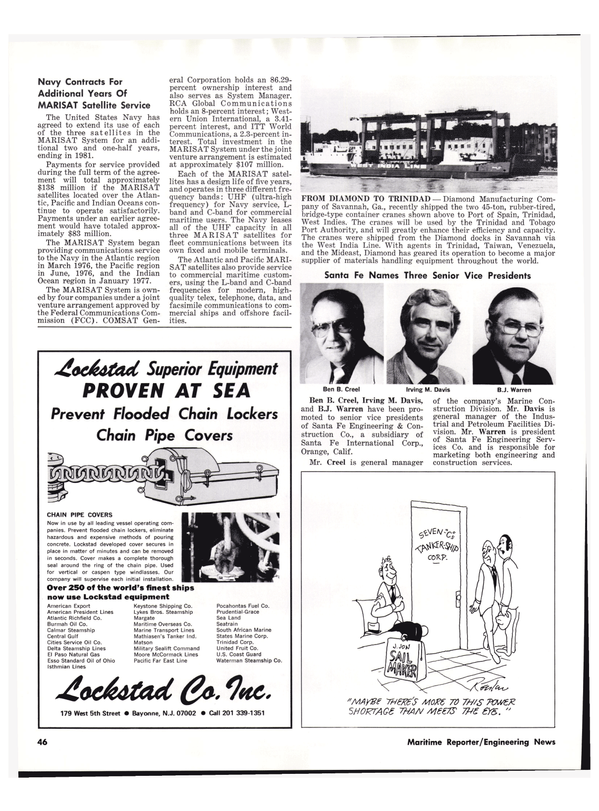