A full-scale production pilot test of a prototype subsea system designed to produce oil and gas from remotely controlled ocean-floor equipment is underway in the Gulf of Mexico, according to Exxon USA.

"This is the first time that oil has been produced through a well and sea-floor production system that were remotely installed, remotely completed, remotely operated, and remotely maintained, by the use of deepwater diverless techniques," said A.C. Garner Jr., manager of Exxon's southeastern production division in New Orleans, La.

The system was brought on production using equipment and diverless procedures suitable for producing oil and gas in water 2,000 feet deep, according to Mr.

"In the United S t a t e s , the search for new reserves of oil and gas offshore is rapidly approaching water depths of 2,000 feet," he explained. "Overseas, Exxon has drilled exploratory wells in 3,400 feet of water. Development of offshore reserves by conventional fixed platforms will be limited by costs to water depths of about 1,000 feet. The objective of our Submerged Production System project is to develop and demonstrate a diverless system capable of producing oil and gas in water depths beyond 2,000 feet. Bringing the prototype Submerged Production System on production is a major step towards accomplishing that goal." Exxon expects the pilot production test to last about a year.

"By the time the production test is completed, Exxon will have invested more than $66 million and over 400 man years of engineering effort to develop the technology and know-how to produce oil and gas from the deep waters of the world," Mr. Garner said.

The SPS project began in 1968, when Exxon r e a l i z e d t h a t the search for petroleum would extend beyond the capability of conventional offshore production technology in the near future. After successful onshore tank tests, a full-scale offshore test of the system was initiated, and construction began in June 1973. The SPS sea-floor structure, called a template, was launched in October 1974 and was secured to the sea floor through the use of diverless, deepwater procedures. Remotely controlled equipment and pro- cedures were developed to lay and connect five pipelines and two power and control cables to the template. Every component of the system was subjected to extensive testing. Initial production was achieved on February 11, 1977.

Oil can flow from the well, through a sub s e a production manifold, through a separator and pump station, and through a pipeline to a nearby production platform. Throughout the production sequence, sensors monitor the flow of oil. Should abnormal conditions develop, the on-bottom safety control system will automatically shut in the affected part of the system. A remote control system provides the command and power link between a surface control center and the remotely operated equipment on the ocean floor. The remote control system, in conjunction with the safety alarm and shut-in system, is designed to provide fail-safe operation of the Submerged Production System. Inverted pans over oil-producing equipment provide a maximum of pollution control in the event of an oil leak.

A key to the system is a maintenance manipulator. When needed, the manipulator is taken to the location and used by remote control to perform routine maintenance operations by replacement of equipment on the Submerged Production System.

The manipulator is launched from a workboat and descends to the template, where it moves along a track around the unit. A system of u n d e r w a t e r television cameras built into the manipulator allows the operator on the surface to watch and control the movements of the manipulator.

Since the SPS was launched offshore, the manipulator has been to the sea floor more than 30 times and has successfully performed the basic types of equipment i n s t a l l a t i o n and maintenance operations.

The Submerged Production System project will enter its final phase in late summer when Exxon plans to install, connect and operate a special production riser designed to test an alternate surface connection for operation of the subsea system and for receiving production from the ocean floor.

During the coming year, the company will conduct extensive performance and reliability tests of all Submerged Production System components. An additional well will be brought on production to increase the flow rates through the unit. "By the time commercial reserves of oil and gas are discovered beneath the deep waters of the world's oceans, Exxon wants to be ready to design a Submerged Production System to develop such reserves as safely, rapidly, and economically as possible," said Mr. Garner. 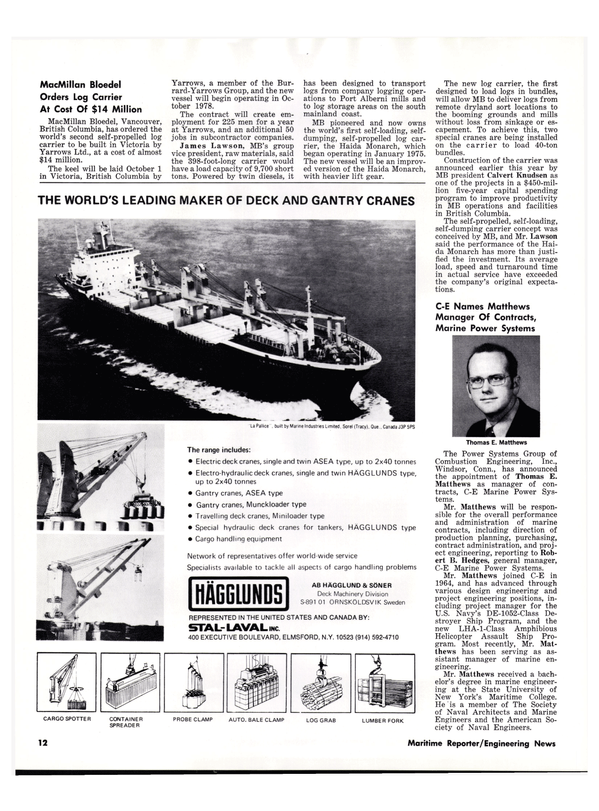