Commenting on Marystown's expansion program, Mr. Barclay said: "Thanks to our expansion, Marystown is emerging as one of North America's most efficient and well-equipped shipbuilding and ship repair facilities of its size." Easily accessible to the North Atlantic shipping lanes, the 10- year-old Canadian shipyard is owned by the Newfoundland Government.

Commenting on future sales possibilities, John Lundrigan, the province's Minister of Industrial Development, said: "We are pleased with our performance to date on the tugboat order for Norway, and we are currently bidding on orders from the Middle East, Europe, the Far East, and Southeast Asia. Marystown's expansion should put us in a good position to win some of these new contracts, as well as construction of trawlers resulting from Canada's new 200-mile fishing limit." Helping Marystown Shipyard secure new international orders are its agents located in Norway, West Germany, the Netherlands, and Singapore.

The current $23-million order for five super tugboats is for K-S Normand Tugs A.S. of Skudenshaven, Norway, which will use them in North Sea oil work. The Norwegian company already has nine supply boats operating there, but the 140-foot-long anchorhandling tugboats being built in Newfoundland will feature an 80- ton bollard pull, and each will be equipped with 6,000-horsepower twin-screw controllable-pitch propellers.

According to Mr. Barclay, the first tug for Normand will be completed this fall by the work force of 350. Two of the vessels are on the berth, with steel work almost complete. The first units of the third were erected in July.

One reason why Marystown Shipyard Ltd. is highly regarded is its "under cover" facilities, where construction can go on day and night and during inclement weather. Another unusual feature is a side transfer carriage enabling ships under construction to be moved laterally from one berth to another, giving the yard an exceptional degree of operational flexibility and mobility.

This unit has a maximum lifting capacity of 3,000 tons. 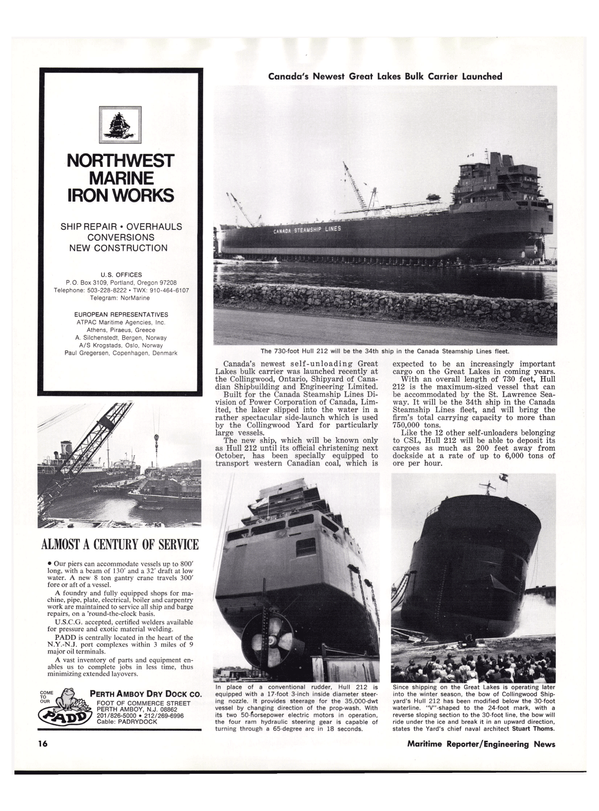