The hopper dredge Manhattan Island, first split hull, self-propelled hopper vessel built in the U.S., completed its sea trials recently, and was awarded certification by the American Bureau of Shipping and the U.S. Coast Guard.

The purpose of the trials, which are required by the U.S.

Coast Guard and ABS, is to put the ship through a series of tests for general seaworthiness and to evaluate her dredging capabilities, according to J.R. Gillespie, general manager of North American Trailing Company which owns and operates the dredge.

The demonstration of dredging capabilities was also observed by the U.S. Army Corps of Engineers.

The North American Trailing Company is a subsidiary of Great Lakes Dredge & Dock Company of Chicago, with the participation of Amsterdam Ballast Dredging of Amstelveen, the Netherlands.

Certificates of both ABS and the U.S. Coast Guard define the class of the ship and her load line. Because of U.S. Coast Guard certification, she will be registered as a U.S. vessel for service in all oceans. The proper manning requirements are also stipulated.

The ship will initially be employed by NATCO on the Eastern Seaboard and Gulf Coast, working on maintenance dredging and beach nourishment projects under the management of the U.S.

The board of directors recently authorized the construction of a second hopper dredge to the NATCO fleet, according to J.A.

Downs, president. "The plans and specifications will be made available to various shipyards within 30 days." Captain of the Manhattan Island is Leroy Piatt, who formerly served with the Marine Division of Bethlehem Steel Corporation.

The Manhattan Island has a carrying capacity of 3,600 cubic yards, with a split hull made up of two longitudinal half sections hinged together at the deck.

"The concept is almost 100 years old," according to Mr. Gillespie, "but this is the first time it has been incorporated into the design of an oceangoing selfpropelled hopper dredge." The ship is 281 feet long, with a loaded draft of 19y2 feet and a light draft of 9% feet. The total installed horsepower is 6,750, operating for 14 days without refueling.

Great Lakes Dredge & Dock Company, the largest dredging contractor in the Western Hemisphere and one of the largest in the world, is listed on the New York Stock Exchange. In addition to the corporate headquarters in Chicago, 111., the company maintains offices on the Atlantic, Pacific and Gulf Coasts, as well as overseas offices in Argentina, Venezuela, Saudi Arabia and the United Arab Emirates. 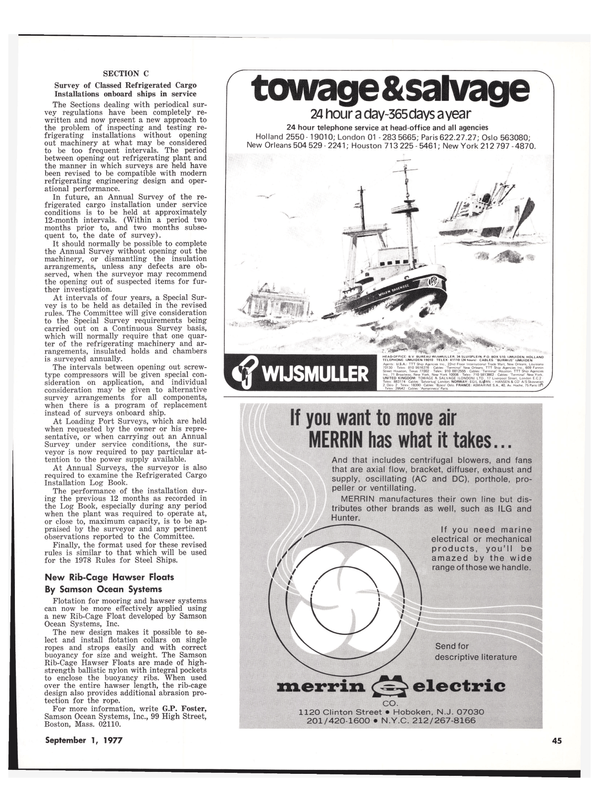