MacMillan Bloedel, Vancouver, British Columbia, has ordered the world's second self-propelled log carrier to be built in Victoria by Yarrows Ltd., at a cost of almost $14 million.

The keel will be laid October 1 in Victoria, British Columbia by Yarrows, a member of the Burrard- Yarrows Group, and the new vessel will begin operating in October 1978.

The contract will create employment for 225 men for a year at Yarrows, and an additional 50 jobs in subcontractor companies.

James Lawson, MB's group vice president, raw materials, said the 398-foot-long carrier would have a load capacity of 9,700 short tons. Powered by twin diesels, it has been designed to transport logs from company logging operations to Port Alberni mills and to log storage areas on the south mainland coast.

The new vessel will be an improved version of the Haida Monarch, with heavier lift gear.

The new log carrier, the first designed to load logs in bundles, will allow MB to deliver logs from remote dryland sort locations to the booming grounds and mills without loss from sinkage or escapement.

To achieve this, two special cranes are being installed on the c a r r i e r to load 40-ton bundles.

Construction of the carrier was announced earlier this year by MB president Calvert Knudsen as one of the projects in a $450-million five-year capital spending program to improve productivity in MB operations and facilities in British Columbia.

The self-propelled, self-loading, self-dumping carrier concept was conceived by MB, and Mr. Lawson said the performance of the Haida Monarch has more than justified the investment. Its average load, speed and turnaround time in actual service have exceeded the company's original expectations. 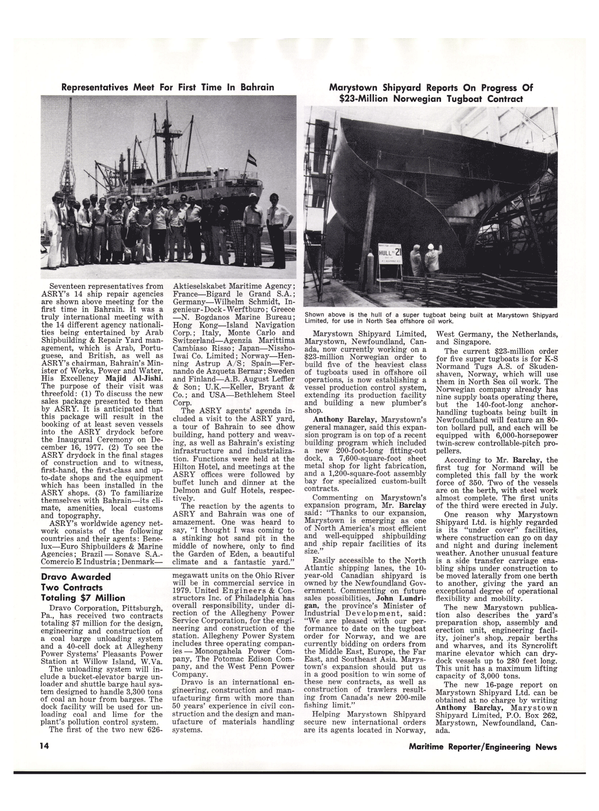